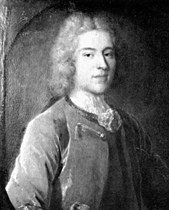 Nicolaus Ludwig von Zinzendorf was born in Dresden, Saxony (Germany) in 1700. His father was the Minister of State. His grandmother, Henriette von Gersdorf, was a devout Pietist ("stress on emotion and feeling in religion.") She assumed primary responsibility for raising Zinzendorf. She controlled where he attended school, his study of law at Wittenberg and ultimately where he lived with his wife Erdmuthe Dorothea of Reuss, an equally devout Pietist. Important to the history of the Moravians is that in 1722 Zinzendorf purchased his grandmother's estate near the town of Herrnhut. The estate's tenants were remnants of a group of religious refugees from Bohemia and Moravia, the Unitas Fratrum. As their landlord, Zinzendorf quickly found empathy with their ideals. Communal in organization, the successful community of Herrnhut soon was at odds with the local aristocracy, town guilds and the Lutheran Church. Zinzendorf tried to stabilize the religious environment by becoming an ordained Lutheran minister in 1735, but to no avail: two years later the Saxon government banished Zinzendorf for eleven years.

Exile actually freed Zinzendorf. He was named a Moravian Bishop in 1737 and immediately worked to establish new congregations in other parts of Germany, the Netherlands, England, the Baltic States, and the West Indies and New York and Pennsylvania. The largest of all of his missions was Bethlehem, Pennsylvania. Zinzendorf decided to call the tiny community "Bethlehem" during a Christmas Eve Service in 1741. The legend says that while singing the hymn by Adam Drese "Jesus, Call Thou Me … lowly Bethlehem" Zinzendorf was inspired to rename the settlement Bethlehem. In 1747 the Saxon government rescinded his exile and two years later recognized the Church of the Unity of the Brethren (a.k.a. the Unitas Fratrum or the Moravians.)

Official recognition did not end Zinzendorf's problems. He continued preaching from 1747 to 1755 in England but the periods of exile and travel resulted in his facing widespread opposition. He returned to Herrnhut in 1756 to face huge debts incurred in the missions followed by the death of his son and then his wife. He did marry Anna Nitschmann, also an ardent Moravian, the next year but then died at Herrnhut in 1760.

Zinzendorf was built in 1892 as the campus Refectory. This was the year the college relocated to the Main Street campus. The building also has been used as seminary classrooms and as a dormitory. Today the building contains classrooms as well as offices for the Education and English departments. The "Dog House" is located in the basement.