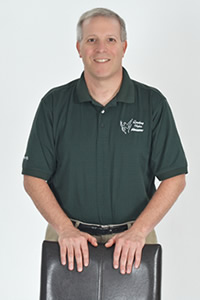 "The liberal arts education is invaluable ... and learning how to think and how to write is critical, and just not something everyone can do."

Rich Hooper ’85 always expected to go to college, and he pretty much always expected that college to be Moravian, since his mother’s two brothers and his older brother and sister had all paved the way for him.

“Moravian was a natural choice,” Hooper remembers. “It was part of our family, and at the same time it was a chance to be away from home, but not too far. And it was the right size.”

Having graduated from Nazareth High School, Hooper felt right at home on Moravian’s campus, where he liked that he would know everyone on his dorm floor, would know the players at games personally and would know the professors in a more familiar and informal way. “In my opinion, knowing the people around you was, and is, one of the biggest drawing points of Moravian,” he says.

Among the many opportunities Hooper likes about Moravian is the chance for students to design their own majors and minors. The flexibility the College shows in allowing students to put various courses and programs together is something that’s not found at larger schools.

“And the liberal arts education is invaluable,” he adds. As an accounting major with a mathematics minor, Hooper says he is “good in thinking analytically. But learning how to think and how to write is critical, and just not something everyone can do. It’s amazing, when you get out into the world of business, how many people can’t write,” he says.

Another plus about his Moravian education was the chance to study a variety of topics during January Term including Russian history and the rise of the Third Reich. “January Term was such a good way to learn new information, broaden your skill sets, and expand your reading and writing abilities.”

In between academic classes, Hooper played intramural athletics; helped run the Pub, a non-alcoholic gathering space that students could rent out; and participated in Moravian’s College Bowl. He also was a member of Beta Lambda Chi.

Hooper even landed his first office job courtesy of an internship obtained through Moravian. Before that summer internship with First Valley Bank, he had done various manual jobs. “Working in an office was a whole new experience, and I parlayed that into a job,” he remembers.

Staying involved and engaged with Moravian over the intervening years has included being involved with shadowing programs and hiring interns. Earlier this year, he was presented with the Pinnacle Award from the Accounting Club. Each year this award is given to one or two Moravian College business or accounting alumni who have reached the peak of career success. He also has participated in Coffee & Connections and spoken on campus several times about business opportunities, and has connected students with business-world mentors.

“Making these relationships goes a long way,” he says. “I’m always impressed at how smart and dedicated the students are, and meeting them always reminds me how good a school Moravian College is.”