Moravian was in his blood 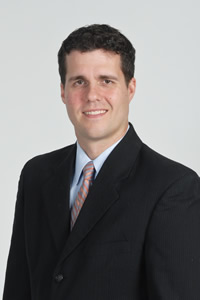 "I can’t choose just one or two classes or professors as being the most impactful. They were all good. And this variety helped make me good at a variety of things, not just a master of one trade."

Jonathan Horvath ’98, Principal at Asa Packer Elementary School in the Bethlehem Area School District, traces his Moravian heritage to his father, Julius Horvath ’66, who spent more than 30 years as an elementary school principal in the Parkland School District. And his family background in education extends to his mother, who taught school for many years, while raising the family, as well as to several cousins. Horvath’s younger brother David, who also works as a local school administrator, followed in his footsteps, graduating a year later.

“Moravian was in our blood,” remembers Horvath, who was born and reared in Bethlehem and decided to stay local when he chose a college. Although he was a “heavily recruited” wrestler in high school, he wanted to focus on education and keep his sports on the side, so he knew choosing a Division III school was the way to go. As fate would have it, the wrestling program at Moravian was cut at the beginning of his sophomore year.

“I was asked to go elsewhere, but I loved Moravian, and decided to stay,” he says. To keep his hand in the sport he loved, he began to coach at the high school level and continued to do that even after graduation, up until he took on an administrative position in the school district. Today, he still coaches with the Bethlehem Township Athletic Association, where he counts his 8-year old son among the members of the team.

Horvath was a psychology and elementary education double-major who also volunteered in local schools in addition to his student teaching duties. He found that he loved the diverse course offerings and close relationships with professors that he found at Moravian.

“I loved the types of classes I got to take … they all contributed to my becoming a well-rounded individual and made my experience so memorable.” In addition to music and guitar lessons, he enjoyed his religion courses and can’t choose just one professor as someone who impacted him.

“I had very positive experiences through all my courses,” he says. “In thinking about it, I can’t choose just one or two classes or professors as being the most impactful. They were all good. And this variety helped make me good at a variety of things, not just a master of one trade.”

Now Horvath finds that he gets to give back to Moravian and to other aspiring educators.

“I get to work with my former professors as colleagues in a collaborative effort,” he says of the education program at Moravian that places students into local schools as observers and student teachers right away, in their freshman and sophomore years. “I love that Moravian gets students into classrooms immediately and that the College creates personalized placements, ensuring the students are in the school that will be best for them, and where they will be most effective for the younger students who they will teach.”

In some other college programs, students make their own arrangements for obtaining observation hours, which can be daunting for some, he says, especially first- or second-year students.

“Moravian has a good system in place,” he explains. “The College has a good rapport with local school districts and sends us quality candidates who are prepped and ready to get into the classroom.” This collaboration has given Horvath a different perspective and he can view the educational process at Moravian from a new vantage point.

“I like to request Moravian students when I need student teachers,” he says. We know the positive relationship that’s built there, and the quality students we get.”

In addition to hosting Moravian student teachers, he also has hired some Moravian graduates as full-time teachers, keeping the cycle going.

“I can’t stress enough the positive experience I had at Moravian; I can’t think of one negative,” Horvath says. “I had to explore, and I took advantage of all the options I could. I felt the College truly prepared me to step out, even though it was so close. I couldn’t have prepared better had I gone anywhere else. It truly equipped me for what I do today.

“I love going to work every day because of the lives I impact and affect. I feel like I’ve accomplished something every day that is thrilling and fun.”

Although he was a commuter student, living right in town allowed him to participate in as many extra-curricular events as he could, and he remembers that he was “on campus all the time.”

He remembers his professors who “all brought something to the table you could learn and grow from. Their work ethic and dedication reflected the energy, motivation and passion they fostered in us. I remember them all as true professionals who were phenomenal and held themselves to the same high standards they held their students to,” he says.

Horvath was a psychology and elementary education double-major, perfect for his present position. Horvath vividly remembers appreciating—even as an undergraduate—the solid nature of the education he received at Moravian. He wanted—and received—a well-rounded education through his classes, hands-on learning, and the broad exposure he got to a wide range of subjects. He consciously extends this experiential education to East Hills Middle School.

“That’s the type of learning I like to see going on in my school today—a rigorous curriculum that is relevant and important, forming a lifelong relationship to learning for these students,” he says. “Moravian accomplished this. The courses were challenging, and as education major, I was given the opportunity to go out into the field at a very early stage, which made what I learned in the classroom real.”