Chairman of the Department of Obstetrics and Gynecology at St. Luke’s University Hospital and Health Network 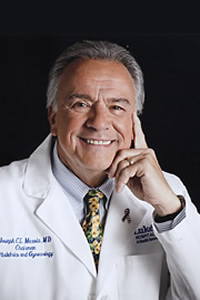 "I knew that Moravian College was the place you went if you wanted to succeed."

Joseph Merola, M.D. ’64 is a great believer in living a balanced life and credits his Moravian education with helping him build such a life.

Ever since Merola was a young boy, he knew he wanted to be a physician. And so did those around him. As a member of the Nazareth (Pa.) High School football team, Merola had shared his dream with the team doctor who said simply, “Then of course you’ll go to Moravian.”

“I have always been a Moravian, and knew that Moravian College was the place you went if you wanted to succeed, and I knew it had a good pre-medical program, so of course I agreed with him,” Merola recalls.

Although Merola would have liked to continue playing football, the practice schedule didn’t mesh with his lab schedule, so he joined the choir instead, what he calls a “magnificent experience.” Extra music courses and the excellent training he received from professors Dick and Monica Schantz have added meaning to his life and still resonate today.

Merola finds balance and enjoyment as a member of the choir at St. Luke’s University Hospital and Health Network, where he is Chairman of the Board of St. Luke’s Physician Group and has been the Chairman of the Department of Obstetrics and Gynecology since 1994 and the Medical Director of Women’s and Children’s Services since 1996. He even has begun taking piano lessons again, an instrument he played as a child.

“I’m building for the day I retire, if I do,” he says with a chuckle. “I want to stay active musically, and I take this quite seriously.”

Merola takes many issues seriously—especially those that impact the lives and health of women and children—but always with a ready smile and sense of humor. His long participation with Planned Parenthood, including as a member of the organization’s board, culminated with his receipt of the Choice Award from Planned Parenthood Association of Northeastern and Central Pennsylvania.

Merola moderates the St. Luke’s medical TV program, Talk with your Doctor, and teaches Residents from St. Luke’s and Medical Students from the University of Pennsylvania School of Medicine and Temple University School of Medicine. He has received numerous awards and recognitions including St. Luke’s Hospital’s 2003 Outstanding Resident Teaching Award for attending physicians and the 2010 network-wide President’s Award for healthcare performance improvement.

Most recently, Merola was given the 2011 Comenius Award at Moravian, which recognized him for his outstanding achievement in the field of medicine, particularly where it concerns women and children.

Merola also credits Professor Al Gaumer, Chair of the Biology Department, with encouraging him in all aspects of his studies. “He guided my course … he encouraged me to do what I wanted to do,” he says. His advice led Merola to attend the University of Pittsburgh School of Medicine, one of the top-rated schools in the nation, where he earned his M.D. with honors in surgery and obstetrics and gynecology. And in 1999, Merola received a Master of Public Health from Columbia University School of Public Health, another prestigious school.

Perhaps it is that aspect of guidance he got from Gaumer that Merola calls on as he gives back to Moravian by mentoring current students, especially those preparing for their medical college aptitude tests. “Even the best and brightest students need help sometimes studying for these tests,” he explains. “They [medical schools] are so competitive. I am invested in seeing that Moravian students are well prepared and I want to help them the way I was helped.”

Merola still lives in Bethlehem with his wife BethAnn. They have three grown children and four grandchildren.

Merola believes one cannot underestimate the power of a liberal arts education. “Being well-rounded and truly educated helps students learn to be good human beings,” he says. “The most important thing for me is seeing that Moravian attracts the best students possible and continues to be recognized for the quality that is Moravian.”