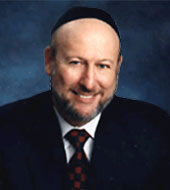 Bethlehem, Pa., September 24, 2014—Rabbi Daniel Lapin will visit Moravian College to present "What is So Immoral About Making Money?" on Wednesday, October 29, The talk will be held at 7:30 p.m. in Foy Hall on the College's Hurd (South) Campus. The event is free of charge and all are welcome to attend.The best-selling author will sign copies of his books at the conclusion of the lecture.

Born in South Africa and son of a well-established Rabbi, Lapin moved to the United States in 1970s, relocating to Washington state from California in 1973. Lapin is known worldwide as "America's Rabbi", and is a noted rabbinic scholar. He is a best-selling author, and is host to the television show, "The Rabbi Daniel Lapin Show" on San Francisco's KSFO. He heads the American Alliance of Jews and Christians, was formerly the founding rabbi of the Pacific Jewish Center in Venice, California, as well as the former head of Toward Tradition, a family begun religious alliance, the Commonwealth Loan Company, and the Cascadia Business Institute. Lapin is known for his eloquent speaking and has an ability to extract life principles from the Bible and translate them in a very entertaining manner. His ability to do so has brought countless numbers of Jews and Christians closer to their respective faiths. He was included in Newsweek magazine in its list of America's fifty most influential rabbis.

During his presentation he will discuss two of his best selling books, "Thou Shall Prosper" and "Business Secrets from the Bible." These two books both include knowledge about the business world, and how to be successful in it. In "Thou Shall Prosper," Lapin offers a practical approach to creating wealth based on the established principles of ancient Jewish wisdom. The book details the ten permanent principles that never change, coined as the ten commandments of making money, and explores the economic and philosophic vision of business that has been part of Jewish culture for centuries. In "Business Secrets from the Bible," the author reveals the link between making money and spirituality, and urges readers to focus on self-discipline, integrity, and character strength in order to achieve personal prosperity.

Public Parking is available under the Hill-to-Hill Bridge. Moravian College encourages persons with disabilities to participate in its programs and activities. Anyone who anticipates needing any type of accommodation or who has questions about the physical access provided should contact Michael Wilson at wilson@moravian.edu or or 610-861-1365 prior to the event.

Moravian College is a private coeducational liberal arts college, offering undergraduate and graduate degrees, that is located in Bethlehem, Pennsylvania. Tracing its founding to 1742, Moravian is recognized as America's sixth-oldest college and the first to educate women. The College emphasizes the deliberate integration of a broad-based liberal arts curriculum with hands-on learning experiences to prepare its 1,600 students, not just for jobs, but for successful careers. Moravian College excels at transforming good students into highly competent graduates who are ready to enter the workplace with confidence or shine in graduate school. Visit the Web site at www.moravian.edu.