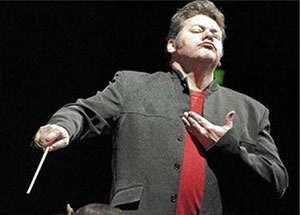 Sean O'Boyle is an Australian composer, conductor, jazz clarinetist, and has conducted performances from the Sydney Opera House to Queens Hall in London and the Lincoln Center in New York. He was featured exclusively at the Commonwealth Heads of Government Meeting where his compositions were performed for Her Majesty Queen Elizabeth II. He has composed the ABC’s Olympic theme for the Sydney 2000 Olympic Games which was subsequently performed for the 2002 Manchester Commonwealth Games and the 2004 Athens Olympics, as well as having been awarded several nominations from the Australian Grammy's for his work. Having written and produced music for more than 150 CDs in collaboration with the ABC, he has worked with many major recording artists and has twice received the coveted ABC Golden Manuscript Award for his work as a composer. October 3 will be the East Coast Premiere of his newest compilation.

Suzanne Kompass, who will participate in the concert, is an extraordinarily versatile performer, a master voice teacher, and has appeared on the great stages of the world; from the Lincoln Center for the Performing Arts in NYC to the Sydney Opera House in Australia. Her engagements include concerts with the New York Philharmonic, Los Angeles Philharmonic, Toronto Symphony, Vancouver Symphony, New Jersey Symphony, Naples Philharmonic, Concord Chamber Orchestra, Adelaide Symphony Orchestra, Queensland Symphony Orchestra and the Australian Pops Orchestra. Kompassa is an artist-in-residence at Moravian College, where she is a master voice teacher and was the recipient of the 2013 T. Edgar Shields Prize for teaching excellence.

The Moravian College Community Orchestra (MCCO) is an extraordinary combination of musicians from the College and from the Lehigh Valley who come together with one goal, to perform great classical orchestral music at the highest level possible. Members of the Orchestra vary from college students who play for the orchestra, to professional businessmen and women, alumni, and faculty from various public and private schools who help with coaching. The MCCO plays music from composers of many cultures - Europe to Asia to the Americas. Works from the Baroque to the Contemporary ages are included in the repertoire and the MCCO is proud to have presented the premieres of new works by both Moravian College composition faculty, students, and graduates of the Music Department.

Donald Spieth, director, came to Pennsylvania as a National Teaching Fellow at Moravian College (PA) where he is currently artist-in-residence in Music and is conductor of the Moravian College Community Orchestra, an ensemble which he started forty years ago and from which he took a twenty year leave to pursue other conducting responsibilities. His imaginative programming and expressive performances have been met enthusiastically by audiences and critics alike. He is also Adjunct Professor and Music Department Coordinator at Northampton Community College. As an advocate for American music, Spieth, with his various orchestras, has premiered over thirty new orchestral works through the annual commissioning of local, national, and international composers. Donald Spieth began his formal training at the University of Iowa where he received his undergraduate and graduate degrees in music performance and literature. His primary conducting teachers have included James Dixon at Iowa and Sixten Ehrling at Juilliard.

Paula Ring Zerkle, conductor, is an associate music professor and the Director of Choral Music at Moravian College. She conducts Moravian Choir and Vocalis, a small a cappella choral ensemble. She teaches conducting and musicianship, and was the faculty advisor to Delta Omicron, an international music honors fraternity for 10 years. Zerkle is a Phi Beta Kappa graduate of the University of California at Berkeley with a BA in Music and French. She is a member of the American Choral Directors Association, College Music Society, International Alliance for Women in Music, International Federation for Choral Music, and the Music Educators’ National Conference, and has been nominated for two awards by the Conductors’ Guild. Before coming to Moravian, she taught and conducted at Lewis-Clark State College in Lewiston, Idaho and Mount Union College in Alliance, Ohio.

Peter Hall is located on the Hurd Campus (South) near Church and Main Streets in Bethlehem, Pa. Parking is available under the Hill-to-Hill Bridge at the end of Main Street. Moravian College encourages persons with disabilities to participate in its programs and activities. Anyone who anticipates needing any type of accommodation or who has questions about the physical access provided should contact Michael Wilson at wilson@moravian.edu or or 610-861-1365 prior to the event.

Moravian College is a private coeducational liberal arts college, offering undergraduate and graduate degrees, located in Bethlehem, Pennsylvania. Tracing its founding to 1742, MC is recognized as America's sixth-oldest college and the first to educate women. The College emphasizes the deliberate integration of a broad-based liberal arts curriculum with hands-on learning experiences to prepare its 1,600 students, not just for jobs, but for successful careers. MC excels at transforming good students into highly competent graduates who are ready to enter the workplace with confidence or shine in graduate school. Visit the Web site at www.moravian.edu.