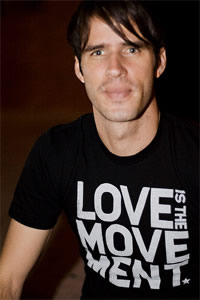 Bethlehem, Pa., November 6, 2014—Jamie Tworkowski, founder of the non-profit organization “To Write Love on Her Arms” (TWLOHA) will present a talk on depression and suicide prevention on Tuesday, November 18, at 7:00 p.m. in Foy Concert Hall, located on Priscilla Payne Hurd Campus. The talk is open to the public and attendance is free of charge.

To Write Love on Her Arms is "a movement dedicated to presenting hope and finding help for people struggling with depression, addiction, self-injury and suicide." Several celebrities and musicians have endorsed the group since its inception in 2006, including Joaquin Phoenix, Miley Cyrus, OneRepublic and members of Paramore, A Day to Remember, Panic at the Disco and Evanescence.

Tworkowski founded the 2006. The group is dedicated to helping those who suffer from depression, addiction, self-injury, and suicidal tendencies find hope, support, and love. TWLOHA began as a simple attempt to tell the story of a friend in need of treatment, and soon became an internet phenomenon and global movement.

For his work, Tworkowski has been interviewed by NBC Nightly News, CNN, MTV, and Spin Magazine. Tworkowski offers a message of hope and community to audiences at universities and conferences throughout the US and as far away as Australia and the UK. He believes what matters most are the people, the real lives and real stories behind the statistics. Tworkowski has dedicated his life to being an inspirational speaker for an important cause.

Moravian College encourages persons with disabilities to participate in its programs and activities. If you anticipate needing any type of accommodation or have any questions about the physical access provided, please contact Michael Wilson at 610-861-1365 or at wilson@moravian.edu prior to the event.

Moravian College is a private coeducational liberal arts college, offering undergraduate and graduate degrees,located in Bethlehem, Pennsylvania. Tracing its founding to 1742, Moravian is recognized as America's sixth-oldest college and the first to educate women. The College emphasizes the deliberate integration of a broad-based liberal arts curriculum with hands-on learning experiences to prepare its 1,600 students, not just for jobs, but for successful careers. Moravian College excels at transforming good students into highly competent graduates who are ready to enter the workplace with confidence or shine in graduate school. Visit the Web site at www.moravian.edu.