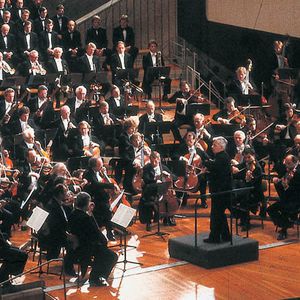 Bethlehem, Pa., November 14, 2014- Moravian College has been selected to receive a free subscription to the Berlin Philharmonic's "Explore Classical Music!" program. As one of only 500 institutions worldwide, The subscription to this program means that Moravian's Music Program will have free access to the Digital Concert Hall and the virtual concert hall of the Berliner Philharmoniker. The extensive concert archive of the Digital Concert Hall features outstanding recordings of masterpieces of musical history and offers the opportunity to convey music both acoustically and visually in the classroom.

"This is an esteemed honor for Moravian College's Music Program and will be utilized in the classrooms of all of our music classes," said Sean O' Boyle, artist-In-residence in the Moravian College Music Program. "EXPLORE CLASSICAL MUSIC! is an education initiative of the Berliner Philharmoniker and Deutsche Bank. It aims to give young people and students around the world access to Classical music - regardless of social background."

"Deutsche Bank provides 500 schools and universities per year with free access to the Digital Concert Hall, the virtual concert hall of the Berliner Philharmoniker," O'Boyle explained. "The extensive concert archive of the Digital Concert Hall features outstanding recordings of masterpieces of musical history and offers the opportunity to convey music both acoustically and visually in the classroom." Moravian College has recently had Wenzel Fuchs from the Berlin Philharmonic as a guest of the Moravian and has professional links to the organization."

The Berlin Philharmonic is an orchestra based in Berlin, Germany, and started in 1882. It was awarded the Grammy Hall of Fame Award and was nominated for the Grammy Award for Best Orchestral Performance. In 2006, a group of ten European media outlets voted the Berlin Philharmonic number three on a list of "top ten European Orchestras", after the Vienna Philharmonic and the Royal Concertgebouw Orchestra, while in 2008 it was voted the world's number two orchestra in a survey among leading international music critics organized by the British magazine Gramophone. On December 18, 2008 the orchestra announced the official creation of a Digital Concert Hall. This unique internet platform of the BPO (Berlin Philharmonic) enables music fans all over the world to see and hear the Philharmonic's concerts, live or on demand, not only under recent conductors, but even previous concerts conducted.

Moravian College is a private coeducational liberal arts college, offering undergraduate and graduate degrees, located in Bethlehem, Pennsylvania. Tracing its founding to 1742, Moravian is recognized as America's sixth-oldest college and the first to educate women. The College emphasizes the deliberate integration of a broad-based liberal arts curriculum with hands-on learning experiences to prepare its 1,600 students, not just for jobs, but for successful careers. Moravian College excels at transforming good students into highly competent graduates who are ready to enter the workplace with confidence or shine in graduate school. Visit the Web site at www.moravian.edu.