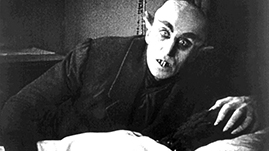 Universally recognized as one of the greatest horror movies ever made and re-mastered in high definition, the film is timelessly sinister. It’s a faithful adaptation of Stoker’s story, and brings to audiences the very first screen appearance of the most famous vampire of them all, Count Orlok.

Nosferatu” continues to chill us nearly 100 years later, with Max Schreck’s portrayal of the count more like an animal than a human being, what with his bat-like ears, claw-like nails, and fangs like a rodent’s.

Just in time for Halloween, the Allentown Band, terrified into submission by the ghoulish gaze of conductor Ron Demkee, will provide a live soundtrack to this horror film classic Saturday, Oct. 26 at Miller Symphony Hall. Unlike its previous silent film presentations of “Phantom of the Opera” and “The General,” this time the music is an original score composed by the band’s principal clarinetist, arranger, and composer Steve Reisteter.

Projected on a large screen above the stage, the film is a restored, high-definition version of the classic tale that begins when newlyweds Hutter (Gustav von Wangenheim) and his lovely wife, Ellen (Greta Schroeder) become concerned when Hutter is sent to Transylvania to arrange for Count Orlok’s (Max Schreck) purchase of a house right across the street from them in Bremen. Will Hutter, who gets imprisoned in Orlok’s castle, escape in time to save his lovely wife from the evil designs of the count?

It’s a plot that has enthralled audiences for years, including Reisteter.

“What first planted a seed in my mind to write a score for it was actually Werner Herzog’s 1979 re-make of ‘Nosferatu.’ It was terrific, but I was disappointed that it didn’t have an original score – you’d hear bits of Wagner and stuff like that,” he says. “But if you’re like me, as soon as you hear something familiar, you have other associations with it. What you remember is original music, like the TV jingles from when I was a kid.”

Born and raised in Bethlehem, Reisteter is a graduate of Bethlehem Catholic High School, earned a degree in music education from Lebanon Valley College and a master’s degree in theory and composition from Ohio University. He has played in the Allentown Band for a remarkable 35 years, the Allentown Symphony Orchestra for 32 years, and is on music faculty at Moravian College.

Two years ago, when Reisteter saw the original “Nosferatu,” he again was disappointed that the score was composed of mixed excerpts by Schubert, Wagner, Liszt, and the like.

“So when I found out we were doing this, I said to Ron, hey, do you mind if a write a score instead of using pre-existing music? He said you know, I was going to ask you but I thought you were too busy,” Reisteter says.

So how does one compose a score for such a creepy film?

Reisteter’s score is unusual music to hear from a concert band, which generally concentrates on tonal material and avoids extended chromatics.

“I think my colleagues were kind of shocked when I wrote this,” Reisteter allows. “When I’m usually asked to write something for the band, people generally say, ‘Don’t write anything weird.’ So I’d keep it kind of light and tonal. But in this case, much of the music matches the film, which in many ways is dark and nasty.”

But have no fear — at least regarding the music! The score is still accessible, with a unique leitmotif, or theme, associated with each main character.

“It’s kind of less like Wagner and more like John Williams, the way I use leitmotifs, especially in the Star Wars stories,” Reisteter says. “So there’s one for Ellen, who is really the hero, one for her husband, Hutter, and for Count Orlok and Knock.”

Reisteter’s creativity includes writing a fugue for the chase scene when Knock escapes for the asylum (“A fugue is really a chase in music, so I thought that would be appropriate,” he says), and including a Slovak polka for the scene when Hutter stops at a village inn on his way to the castle. (“All my grandparents came from Slovakia, so I thought I’d write something in that style,” says Reisteter.)

There’s a fair share of humor too, emphasized in an especially dissonant passage where Hutter drops a picture of his wife, and upon picking it up, Orlok remarks “You’re wife has a beautiful neck.” Visual cues added to the high-definition video version, not possible in the purely black and white original, include color tints to suggest the time of day — a deep navy blue tint, for instance, tells us that we’re seeing Orlok at midnight.

The music, which runs non-stop for over an hour-and-a-half, with only a single break for intermission, is quite a marathon for the musicians.

“I guess I didn’t realize it at the time, but I was treating the clarinets like violins — they were playing all the time. ‘Wow, the clarinets really don’t rest in this piece’ the clarinetist next to me observed,” Reisteter says.

To keep music and image synchronized, Demkee will be referring to a “spotting” sheet during the film, noting such musical cues as “Hutter cuts his finger” or “Coach stops at castle.” His formidable task will be to read these cues and keep an eye on film in front of him, at the same time conducting the band.

The musicians, on the other hand, have no choice — they are under Demkee’s power, and must do as the master commands.