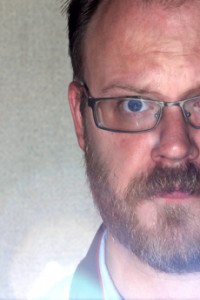 Bethlehem, Pa., December 2, 2014—Novelist, screenwriter, game designer, and blogger Chuck Wendig will be visiting the Moravian College campus community for a talk on Friday, December 5, at 1:10 p.m. in Zinzendorf 103, located on Moravian College's Main Campus. He will be speaking to students in two writing courses.

He also the author of these soon-to-be-published novels: "The Cormorant," "Blightborn (Heartland Book #2)," "Heartland Book #3," "Dinocalypse Forever," "Frack You," and "The Hellsblood Bride."

Wendig along with writing partner Lance Weiler, is an alum of the Sundance Film Festival Screenwriter’s Lab (2010). Their short film, Pandemic, showed at the Sundance Film Festival 2011, and their feature film HiM is in development with producers Ted Hope and Anne Carey. Together they co-wrote the digital trans-media drama Collapsus, which was nominated for an International Digital Emmy and a Games 4 Change award.

Wendig has contributed over two million words to the game industry, and was the developer of the popular Hunter: The Vigil game line (White Wolf Game Studios / CCP). He was a frequent contributor to The Escapist, writing about games and pop culture. Much of his writing advice has been collected in various writing- and storytelling-related e-books and will be released from Writer's Digest in the future.

Moravian College encourages persons with disabilities to participate in its programs and activities. If you anticipate needing any type of accommodation or have any questions about the physical access provided, please contact Joyce Hinnefeld at hinnefeld@moravian.edu or 610-861-1392 prior to the event.

Moravian College is a private coeducational liberal arts college, offering undergraduate and graduate degrees,located in Bethlehem, Pennsylvania. Tracing its founding to 1742, Moravian is recognized as America's sixth-oldest college and the first to educate women. The College emphasizes the deliberate integration of a broad-based liberal arts curriculum with hands-on learning experiences to prepare its 1,600 students, not just for jobs, but for successful careers. Moravian College excels at transforming good students into highly competent graduates who are ready to enter the workplace with confidence or shine in graduate school. Visit the Web site at www.moravian.edu.