Bethlehem, Pa ., March 30, 2015—Rapper Hoodie Allen will headline Moravian College’s spring concert on Friday, April 17 at 6:00 p.m. in Johnston Hall. Allen will be joined by Audio Push for the annual concert. Ticket are $10 in advance and $15 at the door.

Steven Adam Markowitz, better known by his stage name "Hoodie Allen", is an independent American hip hop recording artist. He attended the University of Pennsylvania, and while he was there, he pledged the Alpha Epsilon Pi fraternity. He also played as defensive back for the Penn's sprint football team. After graduating in 2010 with a degree in marketing and finance, he worked at Google as an AdWords associate in their Standardized AdWords Reseller Training (START) program. After realizing that his job at Google and his passion a musician were starting to coincide, he decided to leave Google in order to pursue music.

Hoodie cracked the Top 10 of Billboard’s Uncharted Territory in 2011. In August, it was #2 on Billboard’s Uncharted Territory. In 2012, Hoodie's All American EP went to #1 on the iTunes charts within hours of its release. All American also debuted at #10 on Billboard's Top Albums and was featured on its hip-hop and R&B column, "The Juice." Allen dropped his debut full-length album, People Keep Talking, in October 2014. "People Keep Talking" includes the song "All About It," which features singer-songwriter Ed Sheeran. 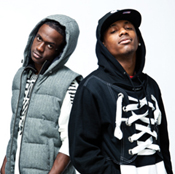 Audio Push is an American hip hop duo from Inland Empire, California, known for the West Coast hip hop dance, Jerkin'. The group consists of Oktane (Julian Brown) and Pricetag (LJ). In 2009, the duo were signed to Interscope records. The duo had their first hit single with "Teach Me How to Jerk".

Johnston Hall is located on Moravian College's Main Street Campus near the corner of Monocacy and Locust Streets in Bethlehem, Pa. For ticket information, call 610-861-1491.

Moravian College encourages persons with disabilities to participate in its programs and activities. If you anticipate needing any type of accommodation or have questions about the physical access provided, please call 610-861-1400 prior to the event.

Moravian College is a private coeducational liberal arts college, offering undergraduate and graduate degrees, in Bethlehem, Pennsylvania. Tracing its founding to 1742, Moravian is recognized as America's sixth-oldest college and the first to educate women. Visit the Web site at www.moravian.edu.