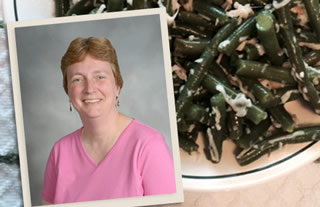 Bethlehem, Pa., September 26, 2014—Earlier this month, A Taste of Home magazine, a national publication with a circulation of 3.5 million food-loving subscribers, informed Carol Traupman-Carr ’86, a dean at Moravian College and an avid griller – that it will publish her grilled green beans recipe in its 'Ultimate Grilling Guide' next year. This is the second time the publication is publishing a recipe from the College's dean of curriculum and academic programs.

A few weeks ago, Traupman-Carr submitted a recipe for her grilled green beans – “one of my recipe creations,” she said – to A Taste of Home magazine, a national publication with a circulation of 3.5 million food-loving subscribers. In early September, she received news that her recipe was recreated and enjoyed in the publication’s test kitchen, and will be published in the magazine’s special “Ultimate Grilling Guide,” available in May 2015.

This is the second time A Taste of Home has selected a recipe highlighting Traupman-Carr’s culinary skills. Readers may still recall her grilled pound cake with warm amaretto bananas recipe, published a few years back. (Click here for the banana recipe!)

“I love to cook, and I love to experiment when I cook,” Traupman-Carr explained. “It’s rare that I make the same thing twice. Sometimes I will start with an existing recipe, and I’ll just substitute an ingredient, sometimes out of necessity because I don’t have it, or because I just want to try something new.”

An avid griller, who also enjoys Italian food, Traupman-Carr recalls the recipe came together almost as an afterthought. While manning her new stainless steel – which she highly recommends, if for no other reason than its easy to clean – she wanted to add a vegetable to accompany her meat selection. She happened to have a shallot on hand.

She threw some Parmesan and the shallot over green beans and whipped up a new creation. “Adding the shallot was a way of getting that ‘not-as-strong-of- an-onion’ flavor that you can get from a real onion,” she said. “It added a bit of kick to the garlic without being overwhelming.” Best of all, it wasn’t a lot of work, she added.

It was a perfect concoction for Traupman-Carr and her family, even though she admits her children don’t love beans.

In fact, when A Taste of Home contacted Traupman-Carr about photographs, as well as comments from her family, she had to twist some arms to taste test the dish. To her surprise, her son paid the dish the ultimate compliment. “You know, I would actually eat these beans,” he said.

The dean noted that the delicious green beans were purchased from our very own Moravian College Farm Fresh Market.

For the entire recipe, pick up the grilling guide next spring. However, for cooking adventurers like Traupman-Carr, she provided a few notes. Start the beans on a stove top, blanching the beans and sautéing the other ingredients. Then put it all together in foil and heat on the grill until the cheese melts.

Traupman-Carr’s interest in A Taste of Home began with a subscription as a wedding gift. Years later, she continues to read – and cook – compiling recipe after recipe. “I have more recipes from that magazine that I could ever possibly make,” she laughed. Most times, she uses a recipe to start the cooking process, only to substitute ingredients and make dishes her own.

As for grilling tips, she explained that aluminum foil is underrated, and not just because of easy clean up. “People tend to think that you can only use your grill for hamburgers and hot dogs, but you can put anything on a grill,” she said. “I’ve grilled nachos; I’ve grilled plums, apples, all types of the meats, kabobs and vegetables. A grill is incredibly useful.”