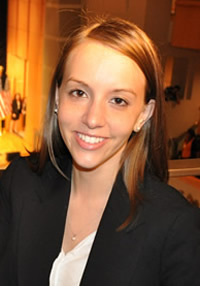 Just five years after graduation, Amanda Logan ’06 already has had a hand in key legislation that will benefit all Americans. As a research analyst in the U.S. Department of the Treasury’s Office of Consumer Protection from 2009-2010, she was involved in the legislative battle for the Wall Street Reform and Consumer Protection Act, specifically, the creation of the Consumer Financial Protection Bureau (CFPB). Logan then worked to help inform the public about the act and its implementation as a research specialist in Treasury’s Office of Public Affairs. And since January 2011, she has worked as an advisor at the new CFPB, whose mission is to help make markets for consumer financial products work for Americans.

“Being a part of the Obama Administration’s financial reform team and helping get the CFPB up and running has been the experience of a lifetime,” says Logan. “I pause every once in awhile and wonder, ‘how am I lucky enough to be in this room, working on this document, participating in this conversation?’”

Luck had nothing to do with it. Originally from Idaho, Logan found that Moravian offered her opportunities she had not even imagined. Through the Washington semester program, she studied in Washington, D.C., learned about domestic social policy, interned with the National Low-Income Housing Coalition, volunteered at the D.C. Employment Justice Center, and was vice president of the program’s student government.

But she didn’t stop there. Logan then spent a semester in Brussels, Belgium, studying at Vesalius College, interning in the office of a member of the European Parliament, and traveling in Europe, including to The Hague, where she watched a portion of the trial of former president of Serbia and Yugoslavia, Slobodan Milosevic.

Logan returned to Washington, D.C., after graduating from Moravian to begin a career in economic policy, first at the Center for American Progress, a progressive think tank, then the Department of the Treasury, and now the CFPB.

“My majors in economics and political science and the courses I took at Moravian and off-campus allowed me to have a career where I’m doing something—as cliché as it sounds—to help people,” Logan says. “I was fortunate to develop strong relationships with Moravian administrators and staff, who encouraged me to continually raise my expectations for myself and were there to offer support.”