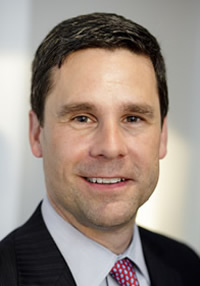 For Andy Hart '90, the world of precious stones is not as far removed from his days at Moravian University as it might appear at first glance.

The vice president of diamonds and gemstones at Tiffany & Co. and president of Laurelton Diamonds, a fully owned subsidiary of Tiffany, firmly believes the education he received at Moravian helped make him the man he is today.

And, Hart adds with a quick laugh, "The best thing about Moravian was meeting my wife there." Hart married Eli Shute, a 1991 graduate. The couple and their three children now live in Campbell Hall, N.Y.

Today, Hart travels around the world, visiting diamond manufacturing facilities from South Africa to Mauritus and Botswana, and feels it was the intimate and supportive educational environment he found at Moravian that helped him discover both himself and what direction he wanted his life to take.

"I had no idea what kind of career I wanted," says Hart, of his arrival at the small school. "It was the well-rounded liberal arts education at Moravian that was helpful for me. It was where my intellectual confidence grew and I learned how to learn.” The open, honest and creative learning at Moravian "allowed me to mature as a person," he explains.

Although he grew up in Easton, Moravian was not a college Hart was considering until he met track and field coach, Doug Pollard. It was Pollard who drew the high school track and field star to the school—a decision Hart looks back on with satisfaction.

Hart, who went on to earn an MBA from Drexel University after graduating from Moravian with a degree in business management, appreciates the opportunities he had at Moravian, the teaching focus of the school and the close relationships he formed with both classmates and professors as a result of the small class sizes and the energy and dedication of the staff.

Still, like many students, Hart had classes he wasn't always sure were relevant, and recalls taking a class in the politics of South Africa in 1989 and wondering "where am I ever going to use this?"

Fourteen years later Laurelton Diamonds acquired a diamond factory in South Africa, where Hart met some of the leaders he had learned about during that class at Moravian—just another example of how valuable his Moravian education was.

He and his wife share a deep affection for Moravian.

"The college holds a special place for us in our lives. We know it's been an important part of shaping who we are today."