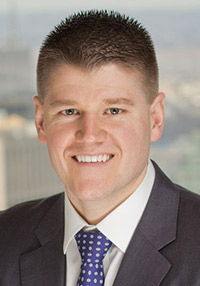 As part of a military family, Austin Rock '12 moved frequently while growing up, but he settled in comfortably at Moravian University, starring in the classroom and on the baseball diamond.

While at Moravian, Rock prepared for his current career by serving as the income fund manager of the Amrhein Investment Club, managing a portion of the University's endowment. He also lent his expertise as a tutor for the Economics and Business Department, as well as for the Athletics Department.

On the diamond, Rock helped the Greyhounds baseball team to four straight 20-win seasons. In his career, he compiled a .311 average, with 31 doubles, 13 homers, 81 runs scored, and 97 RBIs. Those numbers earned hi, several individual accolades, including inclusion on the 2011 and 2012 Landmark All-Conference First Teams. During his last three seasons, Rock was also a member of the conference's Spring Academic Honor Roll and, as a senior, he was named to the 2012 Capital One Academic All-America Baseball First Team.