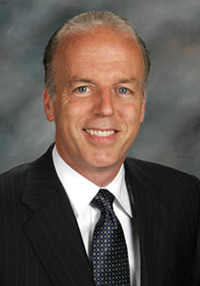 Gregg McNelis ’77 makes smart moves for a living. As chief executive officer and president of TBS International, Ltd., he advises business clients and partners about the most efficient, effective way to ship their valuable cargo to markets worldwide. In a month’s time, he often conducts business in several different continents, one week over a plate of feijaoda in Brazil, the next over kimchee in Korea. He takes a break in the action only long enough to contemplate his next move.

For the former basketball team captain, the fast-paced, high-stakes arena of international business is challenging, exciting and very rewarding. “My work gives me opportunities to perform and compete with people from many cultures—the Chinese, Dutch, Greeks—people whom you respect and like,” he says. “And if you perform well, with honor and integrity, you will prevail even when times become tough.”

A founding partner in TBS, McNelis got his start in shipping as a broker, shortly after he graduated from Moravian with a dual degree in business and English. In the 1972-73 season, former Moravian men’s basketball coach Ted Zawacki recruited him to play for the Greyhounds, and the 1975-76 team went on to post an 18-8 overall record, tying for the MAC Southern Division Southwest Championship. In 2008, the team was inducted into the Moravian University Athletics Hall of Fame.

“Transferring to Moravian was one of the best things I ever did,” he says. “I came to play basketball, but the education I received turned out to be even more important. The discipline and confidence you learn in your sport, together with the knowledge gained in the classroom, are tremendous assets out in the world.”