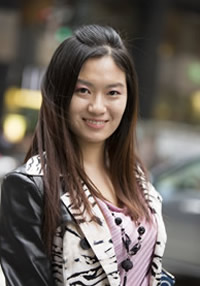 The first time Hannah Yang ’11 stepped foot in the United States was at the beginning of her freshman year. Unafraid and excited, Yang quickly made friends and felt at home at Moravian.

She had an ally awaiting her arrival, in the form of her mother’s friend, Fang Zhang ’00, who had encouraged Yang to apply to Moravian and to take a “practical major—one with a good chance of being employed after graduation,” says Yang. After escorting her to the campus and helping her settle in, Zhang returned home to Harrisburg. And so the accounting major Yang was on her own in a strange country.

“It was very interesting. I had to learn everything, even how to use the meal plan, how to do laundry and find the classrooms,” she says. “I would walk into the wrong class, and say to myself, ‘That’s not physics!’ It was challenging.”

After figuring things out during her first year, Yang became more serious and began to stand out academically. “I love to learn, and I never felt overwhelmed,” she recalls. “Learning in such a friendly environment was a blessing for me.”

Yang connected with many professors and staff and although she can’t name them all, she remembers that everyone helped her become comfortable in her new surroundings. She is especially grateful for the courses she took with Nathan Shank, her mathematics advisor. “Those classes challenged me and really prepared me for the real-world environment.”

She worked in the library and also tutored students in math and economics. She says Amy Saul, director of career services was a big help, as were the events sponsored by that department, such as Back to Briefcase, which helps students make the transition to the professional world, and the Etiquette Dinner.

“Moravian does an excellent job at preparing students,” says Yang. “I have friends (in New York City) who are not that well-prepared.”

Such in-depth preparation helped Yang find her current job as an assurance associate at Price Waterhouse Coopers in New York. She recalls that after 2008, recent graduates had a hard time finding work, but her way was eased by Bertie Knisely and Julia Gasdaska, two directors of leadership giving, and by Barbara Vinciguerra and John Rossi, two accounting professors, who helped her with professional connections and with practice interviews before she met with her future employer.

“I also applied to different Ph.D. programs as a backup, because if I didn’t have a job within three months of graduating, I would have had to leave the country,” she says. “I was admitted into Lehigh’s math Ph.D. program, but didn’t go once I got this job.”

Yang also was a member of the international club, president of the accounting club and president of Pi Mu Epsilon, the national mathematics honor society. She remembers the annual trips with the accounting club fondly, knowing those experiences will be with her forever. “I remember one speaker who talked about his challenges and struggles when he was burned over 90 percent of his body when he was a child,” she says. “He gave me courage and strength and a good perspective on my own life.”

Although Yang is glad she majored in something that helped her find a good job, as her parents and Zhang had advised, now she is taking classes in fashion design at the Fashion Institute of Technology in Manhattan, because she has always loved fashion.

“I took a course called peace and justice studies during my senior year, and it was a life-changing class for me,” she says. “It encouraged us to research how to pursue our heart’s desire while serving the greater good.” For her final project, Yang decided to sketch her design ideas for women’s fashion that she believes will transform the world of women’s clothing.

“I think women’s aesthetics are based on men’s expectations, and I believe women should design clothes that make other women feel confident and powerful, not just what the other gender thinks they should wear,” she adds.

“This class was the essence of the liberal arts,” she says. “We need to connect our passion with the greater good of the world—to create peace and justice in the world, using our best effort. We realized (through this class) that the world around us has everything to do with us, and we were roused to make a difference. I plan to utilize everything I’ve learned to launch my own line eventually, and to make that difference,” she concludes.