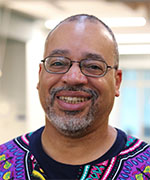 Teaching: I offer courses in African and African American histories.

Current Research: My most recent books, South African Literary Cultural Nationalism-Abalobi beSizwe eMzansi - 1918-45: Returning to the Source (Cambridge Scholars Publishing), is a theoretical reflection on the history and nature of the interactions between sub-Saharan Africa and Europe from 1341 to the present that builds on research comparing literary cultural nationalist movements among Africans and peoples of African descent in the Atlantic world during the first half of the 20th century.