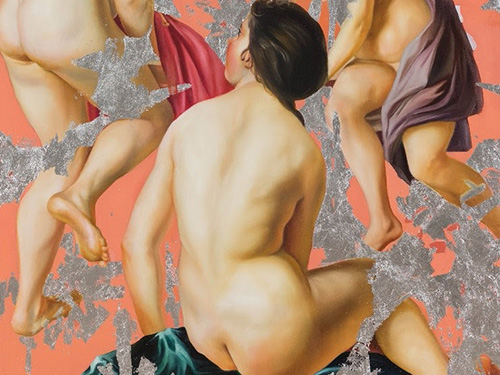 “The Bones of Us Hunger for Nothing,” an exhibition of the works of Angela Fraleigh, associate professor and chair of art, at the Wilkes University Sordoni Art Gallery (above) closes on March 2 (opened January 16). You can read an exploration of the exhibit in the piece “Allentown artist Angela Fraleigh reimagines female role in traditional art,” published in the February 9 edition of Wilkes-Barre’s Times Leader. 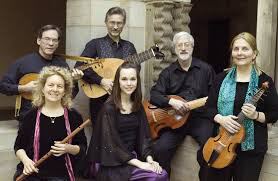 The Baltimore Consort, a musical ensemble that performs a wide variety of early music, performed its Shakespeare program, “The Food of Love” on January 26 at the Friedens Lutheran Church in Oley, PA. The program contained music based on Shakespeare’s plays including “As You Like It,” “Twelfth Night,” “Romeo and Juliet,” “Henry IV,” “Hamlet,” and “A Midsummer Night’s Dream.” Larry Lipkis, composer-in-residence and director of early music is a longtime member of the consort, playing viols and recorders.

Professor of Psychology and Department Chair Dana S. Dunn co-authored the paper “Embedding Career Issues in Advanced Psychology Major Courses,” which appeared in the December 4, 2017 issue of the journal Teaching of Psychology.

Congratulations to Santo Marabella, professor of management, who was named 2017 Entertainment Newsmaker of the Year by the Reading Eagle.

Kin Cheung, assistant professor of Asian religions, presented “Buddhist Perspectives on Ethical Issues in Artificial Intelligence” at the Buddhism and the Fourth Industrial Revolution International Conference organized by The Korean Association for Buddhist Studies 한국불교학회, Dongguk University 동국대학교, Seoul, South Korea in December. Earlier, in October, he presented “Healing and Religion in a Contemporary Chinese-American Community” at the “This Land Is Our Land”: Chinese Pluralities Through the Americas, An International Conference of the Chinese Historical Society of America in San Francisco.

The Bethlehem YWCA Great Decisions Program is presenting a series of lectures weekly through March 28 at Kirkland Village, Bethlehem, PA. On February 21, Kelly Denton-Borhaug, professor of religion and co-director of Moravian’s peace and justice studies minor, presented "U.S. Global Engagement and the U.S. Military.” And coming up on March 21, Beth Gotwals, associate professor of nursing, will present a lecture titled "Global Health Progress and Challenges.” Great Decisions has been hosted by the Bethlehem YWCA for approximately 40 years. The lectures are held weekly on Wednesdays from 11:00 a.m. -12:30. Online registration is available through; http://ywcabethlehem.org/programs/great-decision/.

Emeritus Professor of Political Science Gary Olson’s piece “Why So Little Empathy and Compassion Within American Culture?” appeared recently in Common Dreams. And “A Confession (of sorts) and a Radical’s Lament” was published in the January 31 edition of the newsletter Dissident Voice. And don’t miss Olson’s delightful column “Of Beards and Women: A Fargo Fable,” which appeared in High Plains Reader (HPR), the arts and entertainment newsweekly for the Fargo region.

Kin Cheung, assistant professor of Asian religions, authored the conference proceedings “Buddhist Perspectives on Ethical Issues in Artificial Intelligence,” which appeared in Encounter of Buddhism & the 4th Industrial Revolution, 570-584. Seoul, South Korea: Dongguk University Press, 2017. And he reviewed the book Buddhism, the Internet, and Digital Media: The Pixel in the Lotus, edited by Gregory Price Grieve and Daniel Veidlinger for the journal Religious Studies Review.

Dana S. Dunn, professor of psychology and department chair was invited by the Society for the Teaching of Psychology to write an article focused on helping graduate students become good teachers. You can read his piece “Moderation in All Things: Developing Good Teaching Skills During Graduate School” here. Dunn’s latest piece for the Chronicle of Higher Education, “Preventing Post-Tenure Malaise,” appeared in the January 18, 2018 edition.

“One Lesson from Holocaust: A Moral Duty to Protect Our Children,” by Hans Wuerth, emeritus professor of German, appeared in the January 25, 2018 issue of the Morning Call.

Fara Farbod, adjunct professor of political science, was interviewed by BCTV on December 12, 2017, discussing capitalism and its alternatives. You can view the interview here. 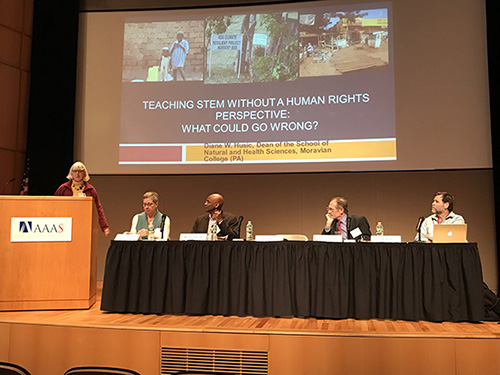 Diane Husic, professor of biology and dean of the school of natural and health sciences, was an invited panelist for the American Association for the Advancement of Science (AAAA) Coalition on Human Rights meeting in Washington D.C., January 25-26, 2018. The panel focused on incorporation of human rights themes into STEM (science, technology, engineering, and math) education.
(Photo taken by Jamie Vernon, CEO of Sigma Xi, The Scientific Research Honor Society.)

Don’t Miss Out on Our Upcoming Faculty Luncheons!

March 29: Anastasia Thevenin, assistant professor of biology, “When Cells Communicate, We All Win!”

April 5: Joyce Hinnefeld, professor of English, “Orphans and Endlings: A Novel in Progress” (a brief reading and discussion)