The design of the front of Moravian College's new health sciences building is a nod to its 275-year history while the rear looks to the school's future.

For months, the 55,000-square-feet Sally Breidegam Miksiewicz Center for Health Sciences has been rising on Main Street as a new gateway to the east campus.

On Thursday, college officials offered a sneak peak of the $23 million building slated to open in July.

The exterior of the building is clad in a mix of modern glass, red brick and stonework that mimics Comenius Hall. On both sides, the design is anchored by a Dutch gambrel roof -- a feature popular in Moravian structures, college President Bryon Grigsby said.

Soon Moravian will hang a 500-pound, 8-feet-tall, glass Moravian star in a glass tower atop the third floor that will be visible from Main and Broad streets.

"We assume the star will be a beacon, a lantern for the area," Grigsby said.

The college challenged its architect ESa to design a building that was representative of the college's long history, while also creating a signature space that announces where the campus begins, Grigsby said.

That's why the facade fronting Main Street references features found in other campus buildings, and the back -- that's where students enter -- is more modern and glass-covered.

The parking lot in front of the building will be converted back to green space and a water feature will be installed to tie it into the rest of the campus.

Inside, the building bears little resemblance to the Moravian of 275 years ago. Home to nursing, public health, informatics and undergraduate health sciences programs, the space is high-tech and filled with light. 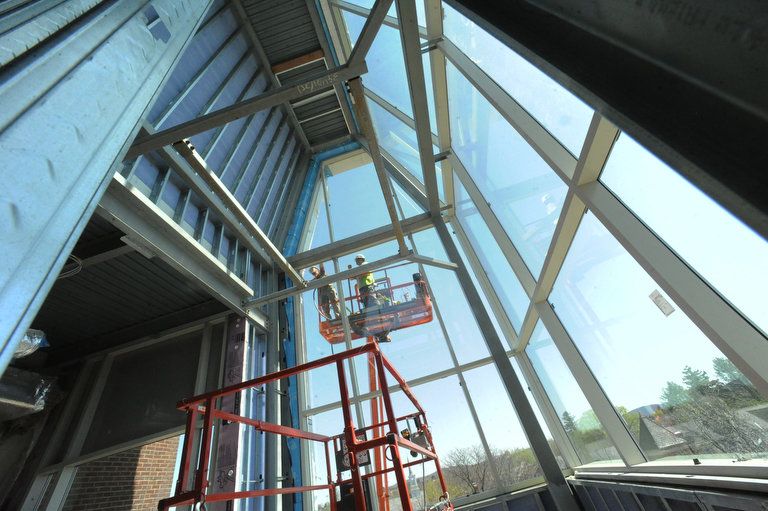 A building for the future

Moravian's overall enrollment is up 13 percent since 2013 and its nursing program is in high-demand, with a 60-student waiting list for the fall semester, officials said. The Sally Breidegam Miksiewicz Center is designed to accommodate a 25 percent growth in the program.

The space ties in nicely with the college's Sports Medicine and Rehabilitation Center where athletic training, physical therapy and occupational therapy students learn their fields alongside St. Luke's therapy and rehabilitation offices. It opened last spring.

When the new building opens in July, the center will have the Lehigh Valley's first virtual cadaver lab. Students and professors will simulate cutting into human bodies on a virtual dissection table that broadcasts each step onto big screens around the lab for others to watch.

Obviously, surgeons need to practice on real cadavers, but a virtual lab is all a physical therapy student would need, he said.

The second floor features a mock hospital floor with 12 patients' beds outfitted with mannequins where students can practice basic skills.

"You want your students to experience difficult situations with robots before they experience them with human beings," he said.

Wedged between the two rooms is an observation room where professors control the robots and watch students' performance. All of the labs record video, which can be used to catch student errors and successes.

The building's community room will be used for students to practice delivering bad news to patients and their families.

In the informatics lab, students will learn how to dig into big data and write computer programs.

"It will look like any kind of computer science wing at Merck or any other corporate setting," Grigsby said.

But there won't be any desktop computers anywhere in the lab, Carney said. All Moravian freshman receive a MacBook Pro and iPad and the campus is cloud-based. Students will just link their MacBooks with the big computer screens around the lab.

Student lounge areas are tucked throughout the building, but the no-shoe lounge on the third floor with the Moravian Star towering above is one of the building's most special spots, Carney said.

The building is named after former Moravian College trustee Sally Breidegam Miksiewicz, who was struck and killed by an impaired driver while jogging near her Berks County home in 2014, Grigsby said.

Miksiewicz loved to kick off her shoes and go barefoot, so the lounge is a fitting remembrance, Carney said. The mother of three was the chief executive officer and vice chairwoman of East Penn Manufacturing, the Breidegam family business.

Her family has deep ties to the college. Her late brother Timothy Breidegam died on an Outward Bound trip while attending Moravian, Grigsby said. Their father DeLight Breidegam threw himself into Moravian, joining the board and making major donations. Today, the fieldhouse and track are named for Timothy.

Miksiewicz graduated from Moravian herself and her three children followed in her footsteps. Her son Matthew is currently a junior.

Before her death, Miksiewicz hoped to surprise her mother, Helen, by naming the health sciences building after her. Instead, her parents decided the building would bear Miksiewicz's name. Unfortunately, DeLight Breidegam won't see the building open. He died at age 88 in 2015.

The family's generosity and commitment to Moravian fast-tracked the building project, he said.

Officials declined to say how much the family donated, but did say that the building would not have opened until 2018 without it.