Struggle for a Cause

Laying on the frosted grass of Moravian College’s campus, over 50 students struggle for sleep on a brisk November evening. Ancient trees loom large over their makeshift bedding, leafless, and cold; they cast exaggerated shadows across the participants of Moravian College’s sleepout. In honor of National Hunger and Homelessness Awareness Week, the Center for Career and Civic Engagement organized a ‘sleep out’ event to simulate the experiences of those living without shelter, in order to shine a light on a problem that all too often is swept under the rug.

“This event raises awareness for homelessness in Bethlehem, makes the students more aware of the plight of people that living very close to them,” said Gillian Sharkey, director of civic engagement, who coordinated this event. “I think it also makes them think of their classmates in a different way.” The sleepout served as a physical example of problems associated with homelessness for not only those sleeping outside, but also visual reminder of a problem that so often goes unseen. 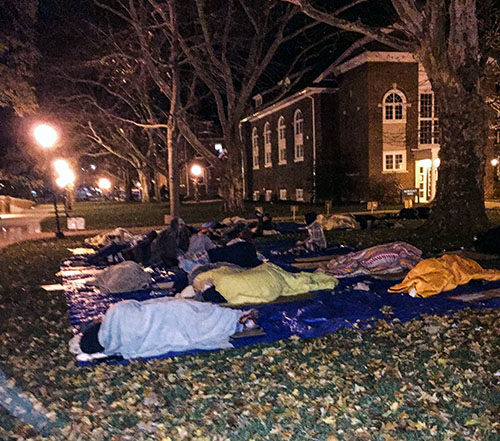 Walking through the makeshift camp of sleeping bags, blankets, and winter coats, I could see the beginnings of a coalition. Students of all years, backgrounds and social circles bundled together for warmth, comfort and support. Playing cards, telling stories, or bringing hot chocolate to a cold stranger were all common activities across the field of cardboard mattresses.

It is through this conscious cooperation and boundless generosity that Hounds were willing to share both kind words and warm clothes to their fellow students. “I think the coolest thing about it is the bonding right now,” said Nick Gaspar ‘16. “If the goal of raising awareness isn’t being met, then the goal of building a community definitely is.”

The Lehigh Valley has the highest percentage of unsheltered homeless people in the state (15%) currently, and on a campus so deeply connected with its surrounding city, Moravian is determined to educate. “In Bethlehem, [poverty] is much more hidden,” said Sharkey. “We don’t know what’s happening out there, we don’t know what is going on with everyone we haven’t met.”

Giving back was another sentiment that stuck with the group throughout the night; the simulation of homelessness served as a constant reminder of the plight of those homeless in Bethlehem itself. “We should be thankful for the things that we have, and we should be seeing the things that other people don’t have and try to give back to the community that is giving so much to us,” said Zachary Benjamin ‘19 straddling a neon blue sleeping bag.

The evening started with a viewing of America’s Invisible Children, a powerful and heart-wrenching documentary about homeless children. After, group engaged in a difficult but necessary conversation on the issue. “You can’t talk about homelessness like it is a picnic,” Sharkey explained to the group of bundled up students. One student shared the story of her uncle, who suffers from schizophrenia, and his own challenges with poverty and housing.

During an event called ‘Face you Facilitator’ students were shown the challenges many people face through circumstance. This sobering lesson served as a dose of serious perspective for all. “A lot of us are really sheltered,” said Darby Codd ’16. “It is not really a problem that has directly affected me, but it is something that we can’t ignore.” Paying attention to this situation is the focus of the week, and the outpouring of support on behalf of the student body is a testament to the activism on campus.

“When I came to Moravian I knew that this was the kind of students that would really latch on to a really amazing cause like this, and I wanted to try it and see what would happen,” said  Sharkey. “Right now, we are hovering around 65 students, and I think it is just fantastic.”