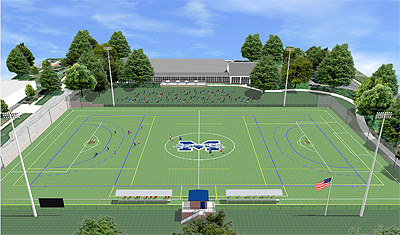 Bethlehem, Pa., May 18, 2016—Moravian College began work this week installing a synthetic turf field that will be home to the Greyhounds' field hockey, men's and women's lacrosse and men's and women's soccer teams beginning later this fall. Located on the College’s Main Street Campus behind the Haupert Union Building, the field will be named the John Makuvek Field. Makuvek, who retired in 1996 after four years as athletics director and in 2010 after 43 years as head golf coach, has remained on staff as head coach emeritus.

In addition to switching the playing surface, Moravian will be adding competition lighting to the field along with a press box. Most recently, the field has been home to Moravian's men's and women's soccer teams but the Quad has also seen the women's lacrosse, baseball and football teams play contests over the years.

As golf coach for 43 years, Makuvek compiled a 316-193 record. He is Moravian’s all-time winningest golf coach, winning the 2006 Commonwealth Conference Championship. His  golf team also won the 1997 and 1994 Middle Atlantic Conference titles, following in the footsteps of the 1974 MAC champion team.

A licensed U.S. Soccer Federation coach, Makuvek earned a B.S. and M.Ed. from East Stroudsburg University where he played soccer, basketball, and golf.

The project is slated to be completed by August 10 so the playing surface is ready for both of the Greyhounds' soccer teams and the field hockey squad to begin preseason practice on August 18. The first event is scheduled for Thursday, September 1 when the women's soccer team hosts Cairn University at 7:00 p.m.

To follow along with pictures of the project, visit http://moraviansports.com/general/2015-16/photos/0004/index.