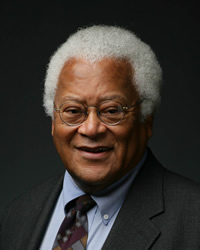 Bethlehem, Pa. April 13, 2015—The Rev. James M. Lawson II, renowned civil rights leader and non-violent change advocate, will visit Moravian College and deliver a lecture "Where do we go from here: Chaos or Community?" on Thursday, April 23 at 7:00 p.m. Prosser Auditorium, Haupert Union Building, on the Main Street Campus. At the conclusion of the lecture, the College will celebrate Lawson’s life’s work by granting him an honorary degree—Doctor of Humanities. The public is welcome to attend and admission is free of charge. A reception will be held immediately following the program.

Lawson is Moravian College’s eighth Peace and Justice Scholar-in-Residence and the 2014-15 IN FOCUS bridge speaker who’s talk will symbolically link this year’s theme of “War, Peacebuilding and the Just Society” to next year’s thematic programming focusing on “Poverty and Injustice.” Those unable to attend the lecture, can view it live online at http://www.ustream.tv/channel/MoravianLive.

During his 3-day visit to Moravian College, Lawson will participate in a number of classes including; Civil Rights & Moral Life, Intro to Peace & Justice, and U.S History Since 1865, and a philosophy class What is Peace? He will join students from the Peace and Justice class and Civil Rights and Moral Life class for a workshop on nonviolence and peacemaking. He will also visit Moravian Theological seminary for a class, “Religion in the American Context,” co-celebrate Communion, and participate in a lunchtime program “Dialogue and Conversation” with Seminary students and faculty.

Rev. Lawson is a pillar of the 1960’s civil rights movement, having trained many key leaders in the strategy and philosophy of nonviolence, and one of the most important advocates for nonviolence in American history. According to Dr. King, Rev. James Lawson is “the leading theorist and strategist of nonviolence in the world.” 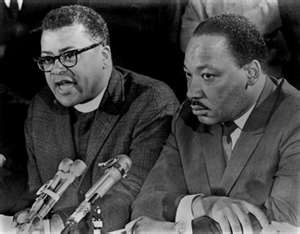 A pacifist, Rev. Lawson refused service in the Korean War and served 13 months in prison. After getting out, he first went to India to study Ghandian nonviolent resistance and then to Oberlin College in Ohio for a master’s degree in theology. While at Oberlin he met Dr. King who convinced him to come south and help in the civil rights struggle. At that time, in 1956, the movement was still at an early stage. Rev. Lawson responded to Dr. King’s call and went to Nashville where he enrolled in the Vanderbilt Divinity School and also began working for the Fellowship of Reconciliation (FOR). As part of his work with the Fellowship, he began holding classes in the basement of a church to teach both the philosophy and the practice of nonviolence. The classes attracted students from area colleges. Many of the students taking these classes went on to play key leadership roles in the civil rights movement. These people included: Diane Nash, John Lewis, James Bevel, and Bernard Lafayette.

Students attending Rev. Lawson’s classes started their work in Nashville. In 1960, the students spearheaded a series of sit-ins at local lunch counters. The activists used the philosophy of nonviolence they had learned from Rev. Lawson. The sit-ins led to the desegregation of facilities throughout Nashville. These same students participated in the founding of the Student Nonviolent Coordinating Committee (SNCC), an organization at the core of the movement. Rev. Lawson was the keynote speaker at the founding meeting for SNCC in April of 1960.

During the course of the Nashville sit-ins, Rev. Lawson was expelled from Vanderbilt’s divinity school. He completed his masters of theology at Boston University.

Several key events in the push for civil rights possess Rev. Lawson’s stamp. In May of 1961, when the Freedom Rides stalled, Rev. Lawson’s Nashville protégées, including Diane Nash and John Lewis, kept the Freedom Rides going. When the original group of riders decided to abandon the rides because of massive violence they experienced, Rev. Lawson’s students came down from Nashville to Birmingham and picked up the ride where the original group had left off. Diane Nash served as their tenacious leader. Rev. Lawson was one of the many people arrested for that action.

Another Lawson mentee, James Bevel, mapped out the strategy used during the 1963 Birmingham marches, working to keep the marches nonviolent and arguing to involve the children in the protest. These factors made the marches a success. In Selma, John Lewis brought all that Rev. Lawson had taught him in Nashville to the voting rights campaign in Selma, Alabama. John Lewis was at the front of the line for the Bloody Sunday March that helped to bring about the Voting Rights Act of 1965. Lewis then went on to an illustrious career in politics. Rev. Lawson helped to organize the 1966 Meredith March. Throughout campaigns like these three, Rev. Lawson remained connected to Martin Luther King, Jr., maintaining an important influence on Dr. King’s evolving philosophy of nonviolence.

Rev. Lawson moved to Memphis, Tennessee in 1962 and became pastor for Centenary Methodist Church. In 1968, when Memphis sanitation workers went on strike, Rev. Lawson served as a leader for that movement. At the behest of his old friend James Lawson, Dr. King came to Memphis in April to support the strike. On April 3 Dr. King was assassinated at the Lorraine Motel.

In 1996, Rev. Lawson received Vanderbilt Divinity School’s Distinguished Alumnus Award and from 2006-2009, he taught at Vanderbilt University as a distinguished visiting professor. In 2007, Vanderbilt established the James M. Lawson Jr. chair in his honor.

From 1974-1999, Rev. Lawson served as pastor for Holman United Methodist Church in Los Angeles. Throughout his years as a minister and into his retirement years, Rev. Lawson continued his work as a proponent of nonviolence and an activist for a host of causes serving as chair of the Clergy and Laity United for Economic Justice and as national chair for the Fellowship of Reconciliation. He has fought for the rights of workers, the rights of immigrants, and the LGBT community. Rev. Lawson continues to give workshops today, training another generation in approaches to social change through nonviolence. At age 85, Rev. Lawson continues his work as an activist.

IN FOCUS is an innovative program to promote in-depth examination of complex issues from multidisciplinary perspectives. Through IN FOCUS the members of Moravian College, Moravian Theological Seminary, and the Comenius Center engage in analysis and activism, through both academic and co-curricular programming, regarding important challenges facing human beings and the world in the 21st century. The theme for 2014-15 is war, peacebuilding, and the just society. Professors Kelly Denton-Borhaug and Daniel Jasper, co-directors of the War & Peace Center. For more information, visit: moravian.edu/infocus/

Moravian College is a private coeducational liberal arts college located in Bethlehem, Pennsylvania. Tracing its founding to 1742, it is recognized as America's sixth-oldest college and the first to educate women. For over 270 years, the Moravian College degree has been based on a liberal arts curriculum where literature, history, cultural values and global issues, ethics, and aesthetic expression and the social sciences are infused with multidisciplinary perspectives. Visit www.moravian.edu to learn more about how the Moravian College liberal arts curriculum prepares its students for life-long success.