Bethlehem, Pa., January 7, 2016— Payne Gallery at Moravian College will display Willie Baronets’ “We’re All Homeless” collection from January 21 to March 6. The exhibit is part of the College’s year-long IN FOCUS | Poverty and Inequality theme programming. An opening reception will be held Thursday, January 21, from 6:30 to 8:00 p.m. and will feature an talk by the artist Willie Baronet. The public is welcome to attend and admission is free of charge. 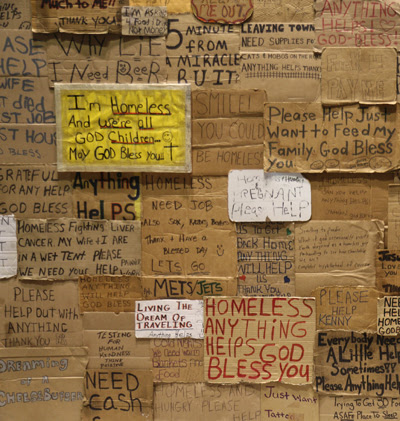 In July of 2014, Baronet traveled from Seattle to San Diego to New York with a three person documentary film crew, six cameras, and two rented Dodges to purchase over 300 sings from homeless people. Along the way, Baronet interviewed and asked 150 people about their stories and backgrounds to answer the question, “What is home?” The exhibit is artistic display of the signs.

“We are all Homeless is an art project that began in 1993 when I started buying and collecting homeless signs from people on the streets,” Baronet explained.  “As a result, my relationship to the homeless has been powerfully and permanently altered. I still wrestle with personal questions regarding generosity, goodness, compassion and guilt. And what it means to be homeless: practically, spiritually, emotionally? Is home a physical place, a building, a structure, a house? Or is it a state of being, a sense of safety, of being provided for, of identity? I see these signs as signposts of my own journey, inward and outward, of reconciling my early home life with my judgments about those experiencing homelessness.”

In 2014, he began a 31-day cross-country trip to buy signs in 24 cities, and began filming a documentary about the process. This project has been featured in dozens of international and local media, including Yahoo! News, NPR - All Things Considered, The Huffington Post, Al Jazeera America and Fast Company’s blog, posted by Katie Couric. An UpWorthy video about the project that was uploaded on August 31, 2015 has been viewed over 5.3 million times.  See his TEDxSMU talk on the project.

Baronet’s work has been featured in Communication Arts, Graphics, AIGA Graphic Design Annual, New York Art Directors Annual, The One Show, Print Casebooks, Annual Report Trends, and The Type Directors Club Annual and Annual Report Design: A Historical Retrospective 1510-1990. He has been awarded with the Dallas Advertising League’s Tops Show, the Dallas Society of Visual Communications and the Houston Art Directors Club. In 2013, he was named an AIGA Fellow for making a significant contribution to raising the standards of excellence in practice and conduct within the design community. 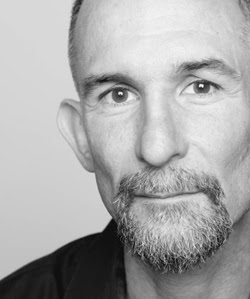 Baronet is a 1982 graduate of the University of Southwestern Louisiana. He has taught advertising design at TCU, Brookhaven Community College in Dallas, Texas A&M at Commerce, and taught as visiting faculty for the M.A. Program at Syracuse University. Baronet was also the technical editor for the premier issue of Advertising for Dummies. In May of 2011 Baronet graduated from the University of Texas at Dallas with an M.F.A. in Arts & Technology.

In 2006, Baronet sold his advertising company to long time employee Holly Mason, and the company changed its name to MasonBaronet, and relocated to the historic Landmark Center in Dallas' West End. He was recently named the Stan Richards Professor of Creative Advertising at SMU's Temerlin Advertising Institute where he teaches classes related to creativity and portfolio development.

The Payne Gallery has been a home for Moravian College’s outstanding permanent collection of fine art. It also has been host to dozens of world-class exhibitions over the past 30 years. In 2001, the interior of the gallery was renovated to Smithsonian exhibition standards after the 1982 conversion from the former gymnasium to the Frank E. and Seba B. Payne Gallery. The gallery, named in honor of her parents, was made possible by the extraordinary generosity of Priscilla Payne Hurd.

Payne Gallery is located on the Priscilla Payne Hurd Campus of Moravian College, in Historic Bethlehem, Pennsylvania. The Gallery is open 12:00 p.m. to 4:00 p.m. Tuesday through Sunday. The gallery is closed Mondays, major holidays and during school breaks.  Admission and parking are free, and the Gallery is wheelchair accessible.

Moravian College is a private coeducational liberal arts college, offering undergraduate and graduate degrees, in Bethlehem, Pennsylvania. For over 274 years, the Moravian College degree has been based on a liberal arts curriculum where literature, history, cultural values and global issues, ethics, and aesthetic expression and the social sciences are infused with multidisciplinary perspectives. Visit www.moravian.edu to learn more.