What is your role at the University and what is something many may not know about the work you do?

In addition to being a member of the sociology department, I also contribute coursework to such programs as sports management, media and communications, and Africana studies, which I helped develop here at the University. I also serve as the faculty advisor to campus radio WRMU from the time I first landed in the Valley some eleven years ago, and I'm listening to its resurgence this year with great pride.

My favorite spot on campus is…

The seminar room, PPHAC 301, because it affords me a broad view of the campus and, on a particularly clear day, a glimpse of the northernmost reaches of the Valley, which is really spectacular in the right light.

The commencement ceremony, because it's great to see all who have survived the battles now wearing the gown. It's also an opportunity to celebrate those with whom I have worked so closely over the years. So in actuality, while it can make for a hot and sweaty morning, and while it can sound a bit cliché, commencement is that one last moment of reflection before I have to turn toward the next generation wending its way up the path. 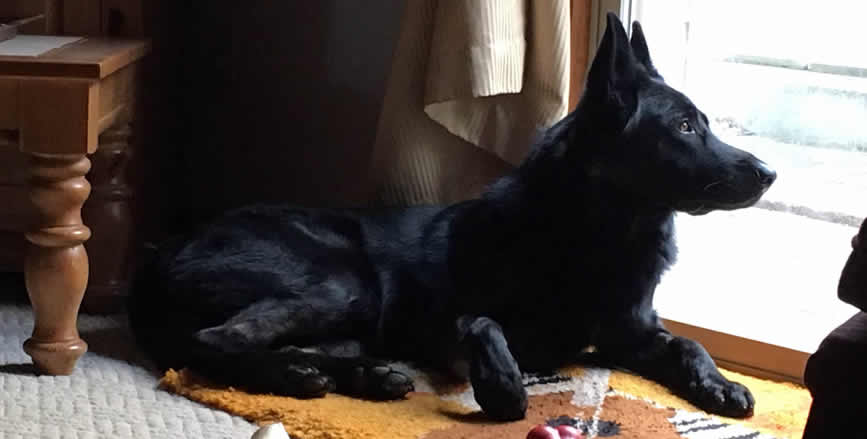 Chill with the pup, edit someone else's manuscript, eek out a few moments on any pending  project of my own, feed the pup, grade some papers, and hang out a load of 'worsh' or two on the line. There are also a few moments when I'll be throwing sticks and lacrosse balls for the pup because we both know who works for whom. And if I'm really lucky, I'll catch word of a roots or jug band playing somewhere in the area and try to find a way to sit in with them on whatever instrument they might need.

I still cringe when I hear people routinely speaking (and of course writing) in an a-grammatical fashion. It actually makes my teeth hurt. This is particularly true when I hear commentators on a broadcast just butchering the language. It's one thing to do so within friendly confines, but it's another when it happens in what should be quite formal settings such as electronic and print mediums.

How serious am I about this? It's why I decided to become an English teacher in my first career. I figured that as long as I was going to have a nutty every time someone dabbled in phrasing such as "Everyone has THEIR opinion" or the ever popular "'IRREGARDLESS' of what happens, we'll always have Paris," the least I could do was to put my money where students’ mouths were. Of course, that was then…but yeah: now too!

Who is your hero? Why?

It’s really a dead heat between Frank Zappa and Richard Pryor, two men with admittedly challenging pasts who, nonetheless, were able and certainly willing to speak to the inequities and peculiarities of the world in really engaging and often outrageous manners. I always appreciated how they took their unconventional ideas and critiques public, essentially offering themselves as both ciphers as well as punching bags while maintaining their integrity right up until their all-too-early deaths. But in the end, they were brilliant and timeless and quite remarkable artists who managed to leave their marks well beyond the stages they once occupied. Add Galileo and my dear friend Monte Irvin to that mix, and I find that I truly stand on the shoulders of giants.

What is the best advice you have ever received?

My primary graduate advisor at the University of Mississippi once knocked me sideways when he reminded me that all I ever really needed to know about how to live life came from a line delivered in badly broken faux-Italian by Raúl Juliá in that otherwise forgettable ‘B’ Film The Gumball Rally. As Juliá is tossing the rearview mirror out the back of his brand new Ferrari, he reminds his perplexed passenger:

And now my friend, the first-a rule of Italian driving: what’s-a behind me is not important!

And while it's hard not to look back (at least sometimes), that line reminds me that it isn't absolutely essential to do so all of the time.

What sound do you love? Why?

I have always quivered and quaked at the sound of the Hammond B3 organ. It comes at me like an admixture of benevolence and raw power and makes every performance, regardless of genre, sound like a Sunday morning in Memphis before the Reverend Al Green.

Super hero film or television program. Even the bad ones are pretty good. What I see on today's screens are simply mind-boggling compared to even the 1990s. So yes--to watch the heroes of my youth spring to life as they have since the turn of this new century just gob-smacks me in ways that I never thought possible while reminding me that reaching for the heavens is no longer solely the purview of science fiction writers and starry-eyed prepubescents!

What makes you happy?

Simply put, I like being around smart, clever, and curious people who value camaraderie over orthodoxies and free speech over censorship, but who can fight tooth and nail before leaving it all behind at the pub's door. That and the ability to accessorize when we dress is all that separates us from the other animals in the zoo.