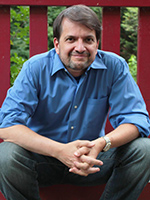 Dr. Santo D. Marabella, Professor of Management, is a past recipient of the Christian R. and Mary F. Lindback Award for Excellence in Teaching and the Timothy M. Breidegam Memorial Faculty Service Award, both during his tenure at Moravian University.

Dr. Marabella’s experience and study includes work in leadership, strategy, management, social work, the arts and not-for-profit boards. He holds a bachelor’s degree in business management from Villanova University, an MBA from St. Joseph’s University, and a Doctor of Social Work from the University of Pennsylvania.

At Moravian, Dr. Marabella served as Chair of the Economics & Business Department from 2005 to 2008; directed The Moravian MBA for seven years and the Certificate in Not-for-Profit Management program for two years. His research and consulting focus had primarily focused on not-for-profit boards (NFPs). He has worked with as a consultant, trainer or speaker to more than seventy regional and national NFPs to strengthen their board structure, orientation, governance and participation, as well as designing and guiding organizational planning and facilitating leadership development, including: National Association for Housing and Redevelopment Officials (NAHRO), National Association for Social Workers – PA Chapter, American Red Cross – PA Chapter, Lutheran Seminary of Philadelphia; and regional divisions or chapters of national organizations such as American Lung Association, Easter Seals Society, United Way.

As a volunteer, he served as president of the Berks County Arts Council from 1987 to 1991, and was responsible for leading that organization through a period of redefining its mission and programs. During the first three years of his tenure, the Arts Council hired its first executive director and secured an unprecedented level of funding ($300,000) and cooperation from city, county and state governments. Also, Marabella created the SUNYCELEBRATION program, a recreation event for homebound and institutionalized persons in Reading, Philadelphia and Villanova since 1979, which has honored thousands of shut-in guests from its inception.

In 1990 and 1991, Dr. Marabella served as the President of his high school alumni association - Reading Central Catholic High School Alumni Association. Under his leadership, the Association organized its structure and operations, raised more than $60,000 for the school and established the “Distinguished Alumni Award.” He also was Chair of Advisors for Alpha Phi Omega (Nu Lambda Chapter); Member, National Philanthropy Committee, Alpha Chi Rho National Fraternity Committee; Regional Finalist of the President’s Commission on White House Fellowships (1991) and Chair for the Moravian University Diversity Committee from 1993 to 1995.

In 2005, he introduced his model for new board member orientation to the not-for-profit sector. The model includes NFP-specific and general board training content that one would expect to find in an orientation program for new board members. In addition, it includes three factors which make it distinct: teaching a board member the “universal truths” that can enhance their perceived ability to govern; creating a dialogue through which a board member can articulate his or her perceived needs and obstacles to fully participate; and, implementing a process for the NFP to be responsive to board member needs and obstacles so board participation increases.

In 2012, Marabella created a model for training customer service personnel that is based on theatre and includes the development of a Job Character Profile. The premise of his research is that customer service positions have a character, much like a character in a play. If customer service employees understand and take on their job character like the consummate actor, they will be authentic, fully present, disciplined and trusting. And, ultimately, they will be more aware of how and who to be in their jobs, not just how and what to do their jobs. In other words, great customer service is all an act! To promote his model, Marabella wrote a three-act playshop (workshop using a play) called “Customer Service: It’s All an Act!” and presents it to various industries and organizations.

Named by the Reading Eagle (Reading, PA) as the “2017 Entertainment Newsmaker of the Year,” Marabella is also a playwright, screenwriter and producer. His current project is a TV pilot, Franklin Street Station, was shot in 2018, in an actual train station in Reading. He has penned a number of one act plays, most recently, “There’s No Place Like Home,” and “Work Will Bring You Home,” both in 2018. His one-act play called, "Metis and the Man," (2017) calls attention to the power we have to manage our fear, if we are open to re-perceiving it as a force to reckon with in our present, that is relegated to our past, so it doesn’t impact our future. He most recently was a producer for This Is Reading, conceived and written by Lynn Nottage. Other projects include: "Gays in the Workplace – The Clear and Present Danger," (2016) a one-act play with a different perspective on the corporate closet, and his latest full-length play in development is "My Dad’s First Dog," (2016) which wonders why is it so easy for dogs and humans to share unconditional love, yet so difficult for people to love each other the same way; full-length play, "Getting: COMPLETE!" (2014) tells what happens when the bully grows up; and, a film-play, Senior Exploits (2013), helps active senior citizens protect themselves from shrewd scams. In addition, he is The Practical Prof®, a regular columnist for the Reading Eagle’s Business Weekly. His first book, The Practical Prof®: Simple Lessons for Anyone Who Works! had its first national release in September 2013. His most recent book, released in 2018 and 2019, is The Lessons of Caring: Inspiration and Support for Caregivers, which is an ebook as well as in paperback and features video interviews with family caregivers, practical tips to become a better caregiver and ways to care for yourself in the process.

Marabella’s current community leadership includes: Founder and Film Commissioner for ReadingFilm, a division of Pennsylvania’s Americana Region (the Visitors Bureau), which he founded in 2006 to attract film and digital media projects to Reading, PA; Past Chair, Alumni Council of the School of Social Policy & Practice at the University of Pennsylvania; Immediate Past Chair, Greater Reading Alliance of Community Theatres. His professional memberships include: His professional memberships include The Lambs®, the Dramatists Guild of America, the Theatre Communications Group, the Academy of Management and the National Association of Social Workers.