The Power of Giving

How scholarships changed the lives of three students

Carla Ramos ’20, a first-generation college student, always knew she wanted to do something in medicine. Her parents, who immigrated to Easton from Peru and for whom English is a second language, had health complications when she was growing up, so she was always taking them to doctor’s appointments and helping them navigate the US healthcare system.

Today, Ramos is a neuroscience major and is planning on going to medical school to become a pediatric surgeon when she graduates next year, thanks to the Harlan F. Fulmer, MD & M. Eleanor Kern Fulmer Scholarship she received while at Moravian. “It’s really been a life-saver for me and my family,” Ramos says. “I couldn’t have imagined being able to support myself and put myself through college.”

The Fulmer scholarship not only freed Ramos to focus on her studies but also allowed her to participate in career-enhancing work-study programs that she might not have been able to do otherwise. “Last summer I worked at the Lehigh Valley Health Network as a research scholar looking at the risks and benefits of pediatric cochlear implants and pediatric tonsillectomies,” Ramos says. “I viewed more than 500 patient charts, and I’m not gonna lie—it was a lot of work. But it was the best experience of my life.”

“My mom’s a rock star,” says Thomas Brim ’19. “She always told me that if I went to college, she’d take care of me.” But at the start of Brim’s career at Moravian, his mom—who is an associate professor of English at Capital Community College in Connecticut—had a serious car accident, which forced her to cut back on her work. “She was out of commission for a really long time, and it put a financial strain on us.” Brim says. “I wasn’t sure I’d be able to afford Moravian.”

Help came in the form of the Ann Woltjen Stoddard Annual Giving Scholarship and the Irving S. & Alma C. Amrhein Scholarship. “Those scholarships have allowed me to do so much,” says Brim. A finance major and accounting minor, Brim started two clubs: the Moravian College Political Awareness Coalition and Brothers United, a mentoring program for minority males. He also had his own radio show called The Hot Button Issues, served as vice president of operations for United Student Government, and worked in the Career Center for two years.

Today Brim works for Drucker & Scaccetti, an accounting firm based in Philadelphia. He also intends to be one of those alumni who comes back frequently, gets to know students, and makes financial contributions. “I talk to President Grigsby about wanting to give back, and he jokes about me funding a building someday,” Brim says, “but I’m not joking.”

Madison “Maddie” Johnson ’20 immediately felt at home on her first visit to Moravian College. It was far enough away from her hometown of Phillipsburg, New Jersey, but close enough to her family. She couldn’t walk past a person on campus who didn’t say hello to her. She could see there were so many opportunities for students to become involved and make something of themselves. But she almost didn’t get to go to her dream school. Johnson knew she’d have to pay for college herself, and the money just wasn’t there.

“I worked really hard my senior year to get my grades up to the best I could,” Johnson says. “And then one  day my admissions counselor called me and said, ‘Alum Dan Petrozzo wants to give you the scholarship that he gives to Phillipsburg High School graduates who go to Moravian.’ ” Petrozzo ’91, who pursued a double major in political science and information systems at Moravian, also holds a law degree from Seton Hall University and is a venture partner at Oak HC/FT Partners LLC. “His scholarship is the reason I’m here today,” Johnson says.

When she arrived on campus, Johnson—a business management major on the organizational leadership track who wants to pursue a career in human resources—jumped right into the many opportunities Moravian offers, including becoming vice president of Sigma Sigma Sigma Sorority, a student staff member at the Center for Career and Civic Engagement, and a student orientation leader. “I love this place,” Johnson says. “I have really found myself here.” 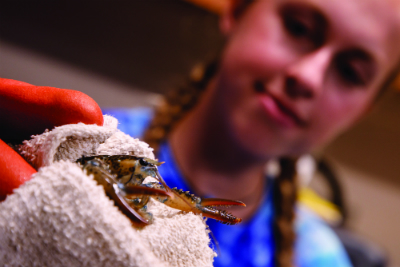 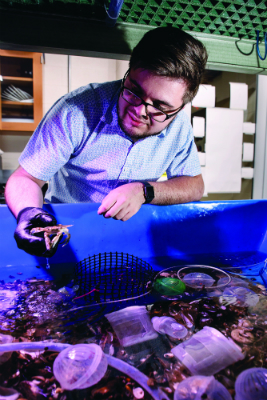 “In general, the research in my lab focuses on the impacts that changing ocean conditions can have on the way ecosystems work,” Lord says. Disruptions to coastal ecosystems can have an impact on plant and animal populations, how clean and clear the water is, and the economic success or decline of fisheries.

Mayer examined the effect of low pH (acidic conditions) on social hierarchies of the American lobster. “With a changing climate, our ocean is becoming warmer and more acidic from the absorption of carbon dioxide. Lobsters rely not only on visual cues but also on chemical cues to sense other members of their population,” Mayer explains.

“It has been shown that low pH disrupts chemical cue sensing among marine animals, and I wanted to see if an acidic environment would impede lobsters’ ability to cue-sense, thereby disrupting social hierarches that help individuals within a population secure food, shelter, and mates.”

Anderson looked at the interaction of blue crabs (think Maryland crab cakes) and nonnative Asian shore crabs, which were discovered on the East Coast in the late ’80s and have become an invasive species. Asian shore crabs have recently moved into areas heavily populated by blue crabs. “The blue crab holds a very important place in the economy and culture in areas like the Chesapeake Bay,” Anderson says.

“My research looked at how these two crab species will interact and compete for food and other resources, as well as what may happen to the eco-system if the Asian shore crab begins to cause blue crab populations to dwindle."