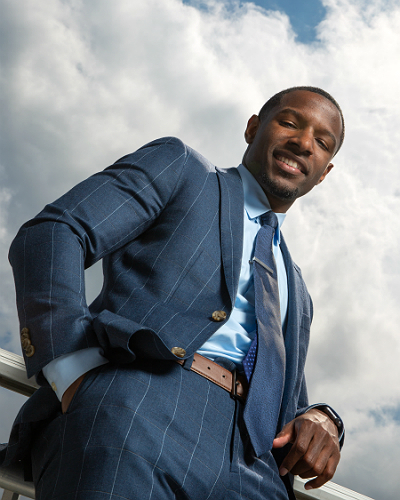 My mom dropped out of high school at 16. So did my father. I never really knew my dad. I grew up living with my mom, stepdad, and five siblings in Asbury Park, New Jersey. My mom and stepdad both struggled with substance abuse, and our family relied on government assistance to get by. Everyone in our neighborhood lived in poverty. Everyone was on government assistance. It’s all I knew, and it seemed so normal.

About the time I reached middle school, my grandmother and aunt got the state involved to take us out of our home. My older brother and I went to live with my aunt in Jackson, New Jersey. It opened my eyes to what life could be.

Jackson has a good school system. It’s where I caught a hint of the possibility of college. I participated in sports and made friends with kids whose lives were very different from what I knew growing up, and I was seeing a stable home environment. I discovered that the life I was living is  not the way it should be.

Nonetheless, I was still in it. My brother and I lived with my aunt for two years, and during that time, my mother got  her stuff together and moved to Brick, New Jersey. And my brother and I moved back home—back with my mom who was turning to alcohol. Back on government assistance. Back into the mud, into this survivalist mindset. My mom wasn’t around much during the week, and she’d take my younger siblings with her. On the weekends, she’d be gone. It was just me and my brother at home.

I was a freshman in high school, and  my brother was two years older. He had done well academically while we lived with my aunt, because she had made sure we did our homework, but when we moved back with my mom, my brother started slacking off. He would say he wanted to go to college, but the opportunity really wasn’t there.

People tell you that you can do whatever you want, but if you are coming home from school to an environment where you have to fend for yourself and you’re not even sure what you’re going to eat, do you really have the liberty to do what it takes to go to college? Your focus is surviving, not trying to progress.

That’s how it was for me until my senior year in high school. Our stepfather came back into our lives, so my mom stayed home a lot more. My brother got a job, which brought in extra income. And then, out of nowhere it seemed, Moravian recruited me for track & field.

The idea of going to a four-year college had never been on my radar, and here was this school that wanted me to come to their institution and compete on their track & field team. I did my research, visited, and spent an overnight with other athletes. The people I met at Moravian were so wholesome and welcoming. This small school in Bethlehem, Pennsylvania, wanted me for something. So I accepted.

I came in with the wrong mindset, though. My priorities were sports, social life, and academics, in that order, and  I struggled in my courses. I didn’t know how to study properly, and I started questioning myself. I would call my aunt and say, “I don’t know how people do this.” Excelling in college was a mystery to me. But not for long.

Spring semester of my freshman year, brothers from Lehigh University’s Omicron Kappa chapter of Kappa Alpha Psi, a multicultural fraternity, came to Moravian. I hadn’t ever seen a group of black men apart from a collegiate organization holding themselves to such stature.  They talked about the fraternity and their work in the underprivileged communities in south Bethlehem. Seeing that multiple black men could go to college at the same time and be in an organization that is so well respected opened my eyes to further possibilities.

“The idea of going to a four-year college had never been on my radar, and here was this school that wanted me to come to their institution and compete on their track and field team.”

From that moment on, I became forward thinking.

To be a member of Kappa Alpha Psi, you had to meet a minimum GPA, which I didn’t have, so I shifted my priorities to academics, track, and social life. I learned how to study, and decided I was not going to just meet the minimum GPA requirement; I was going to surpass it throughout the rest of my academic career.

As my grades improved, I started thinking about other aspects of college life that would benefit me and also allow me to have an impact on the Moravian College community. I helped found the college’s Black Student Union, became a representative on United Student Government, and with four other students, brought Kappa Alpha Psi to Moravian. My priority list grew to academics, clubs and organizations, athletics, and social life.

I made the dean’s list both semesters my senior year, and a couple months after graduating with a degree in economics  and a concentration in finance, I began working for the Federal Reserve Bank  of Philadelphia, where I am now. When  I came to Moravian, I had thought I wanted to be a physical education teacher. But then I looked at the situation at home, and my goal became to put myself in a position to provide not just for myself but also for my family. I want to give my siblings the opportunity to have a good career.

I understand that I am very fortunate.  I came from very humble beginnings,  and through hard work and perseverance, I was able to overcome adversity. I no longer worry about where my next meal  is coming from. Once I got accepted to Moravian, I knew that nothing was going to be the same for me—that I could do whatever I put my mind to, and it was my choice as to how I was going to get there.