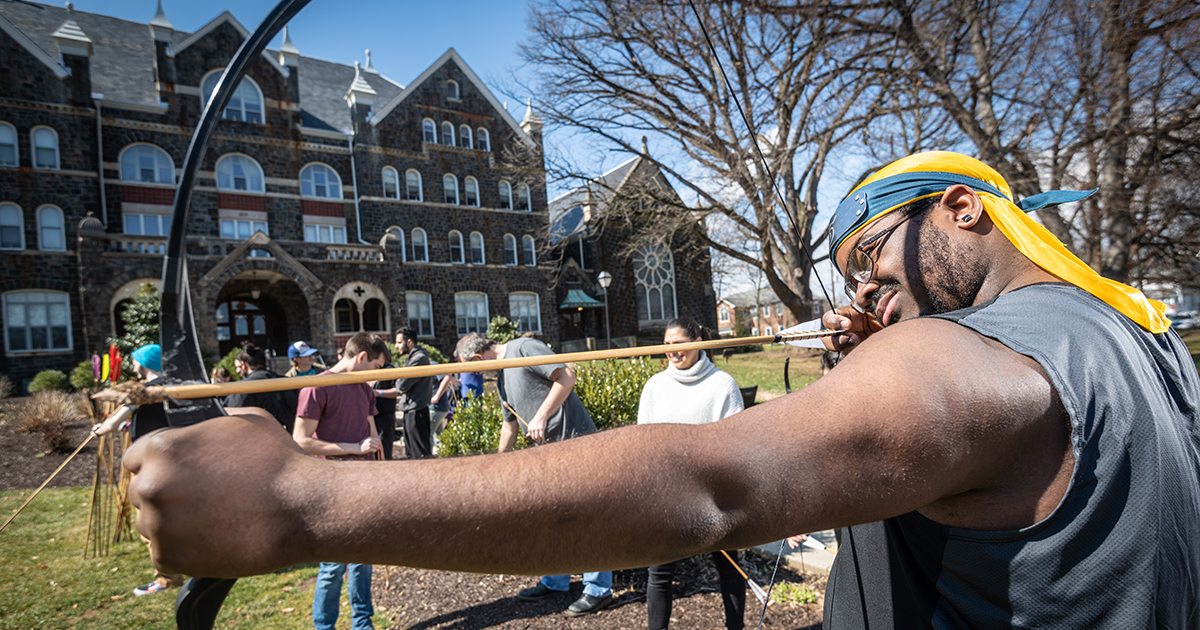 Tim King ’22 takes aim with a bow and arrow.

A Class to Dye For

Experimental Archaeology’s hands-on history lures students who want to dig their fingers into the past.

It’s nothing like throwing English darts in the Old Brewery Tavern. For one, the dart or spear is 5 feet long and tipped with bone or stone. You don’t grasp the shaft near the point like a dart or even in the middle like a javelin. Instead, you use a foot-long piece of wood with a notch in one end that holds the base of the spear near the fletching. This ancient device, called an atlatl, acts like a lever and an extension of your forearm that propels the spear with much more power and velocity than you could ever do without it.

Thhppt! After many tries, Nick Bergsma ’21 sinks a bone-tipped spear deadly deep into the deer’s flank. 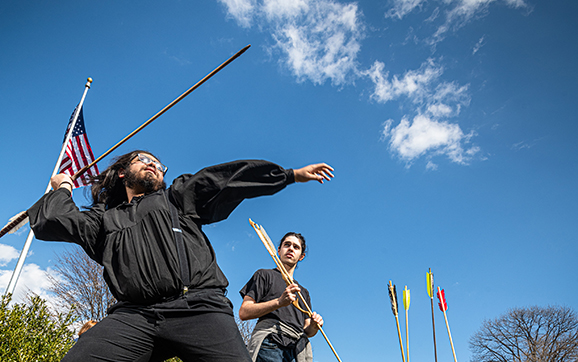 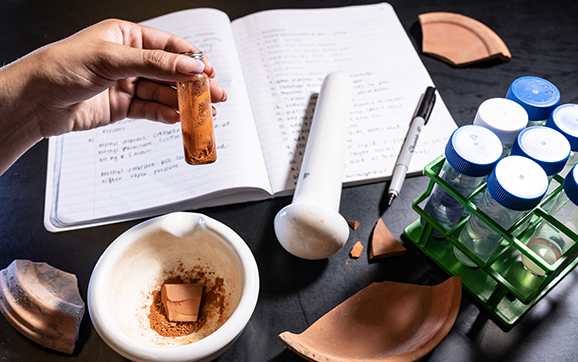 But there will be no venison steaks tonight in the Moravian University cafeteria. The impaled doe is a lifeless archery target set up on the lawn in front of Comenius Hall for today’s lab lesson in History 265, Introduction to Experimental Archaeology.

“It took me about an hour, but I finally got the hang of it,” says Bergsma, who notes that the 3D deer target wore a cow’s-head mask so folks driving by on Main Street wouldn’t think Bambi was in danger. One year, a driver called Bethlehem police to report Moravian students hunting deer on campus.

Such are the consequences when history comes alive, when you move students’ noses out of the books and into the dirt of the past. In History 265, students learn flint-knapping—striking hunks of chert, flint, quartzite, or obsidian with another rock to chip off flakes in a conchoidal fracture pattern that fashions arrowheads, spear points, knives, and scrapers. They make cordage by twisting together milkweed, nettle, and prairie flax fibers to attach the stone points to the tips of arrows. They mold clay bowls and fire the pottery in a pit kiln dug into the ground. They dye fabrics using madder root and indigo. They cook meals from foraged plants using ancient recipes and build shelters using branches and clay.

Co-taught by historians Sandy Bardsley and Jamie Paxton, the class, which started in spring 2018, goes far beyond the lectures, books, and climate-controlled buildings of typical history courses into the fresh air on campus and the woods of the university’s 70-acre A. John ’50 and Lillian K. Deputy Field Study Center for Environmental and Biological Sciences in northern Northampton County. 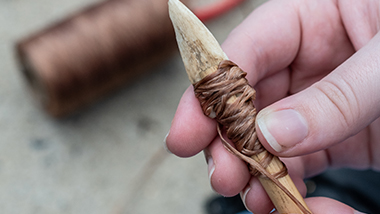 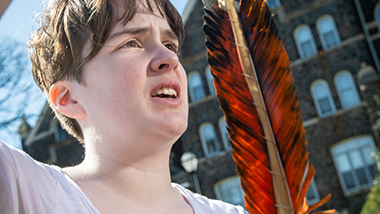 Above: Students made tips for arrows and spears from bone, obsidian, and stone; Peyton Zankel ’20 examines a spear's fletching. 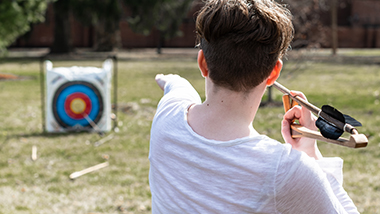 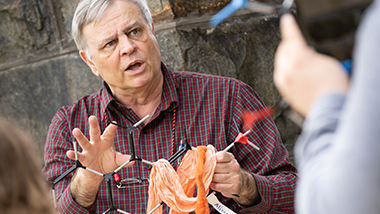 Above: They tested the differences in using these prehistoric hunting weapons by attempting to hit targets on the lawn of Comenius Hall;
Chemistry professor Carl Salter explains the molecular model for a plant compound that produces red dye; History student Hallie Rutter ’23 examines artifacts to determine their possible uses.

According to ExArc.net, experimental archaeology is “an approach to fill in gaps in our knowledge about the past, which cannot be filled through archaeological research methods”—that is, digging in the dirt or reading books about what archaeologists have found there. Experimental archaeologists replicate primitive tools and technologies to try to understand how the tools were made and used, and how efficiently they functioned.

“The simplest definition I go with is it’s like reverse-engineering stuff from the past to see what you can figure out along the way about people’s technology, but also things about their lives,” says Bardsley.

A good example of the fruits of experimental archaeology is what we know about the structure of Iron Age shelters called roundhouses in Britain. Because they were made of organic biodegradable materials, usually the only remaining clues of their existence at a site are circles of postholes in the ground. As the wooden posts deteriorated, they left stains in the ground marking their location. So archaeologists can surmise the location of the structure and, by understanding the local environment’s trees and plants, what it might have been made of. “Only through the process of actually constructing the house today using local materials can archaeologists test to see how it might have been built,” explains Paxton. How was the roof constructed? What was its pitch? Was there a smoke hole in the top?

By building a replica house with a smoke hole and starting a cooking fire, experimental archaeologists quickly realized a smoke hole in the roof was unlikely. The draft was so intense that the cookfire set the house ablaze. Knowing that, researchers eliminated the smoke hole and tested thicknesses of thatch roofs that allowed the smoke to escape while keeping the rain out.

Experimental archaeologists follow the scientific method to test their hypotheses and often collaborate with chemists to determine if their notions are correct. In one experiment, History 265 did just that, teaming up with Moravian chemistry students to test for the residue of cooking fats and oils on pottery shards they had excavated. Using a mass spectrometer, the chem class analyzed the shards for remnants of lipids from venison cooked in the pottery, which would have been a staple of the Lenape living in what is now Pennsylvania. 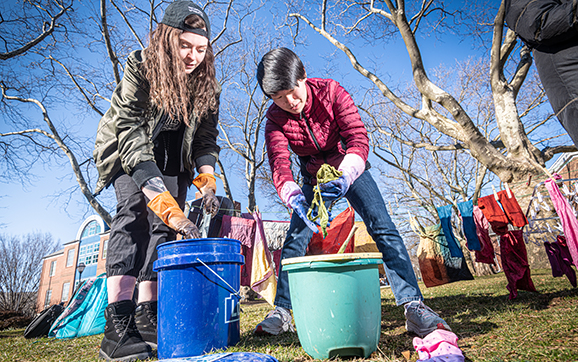 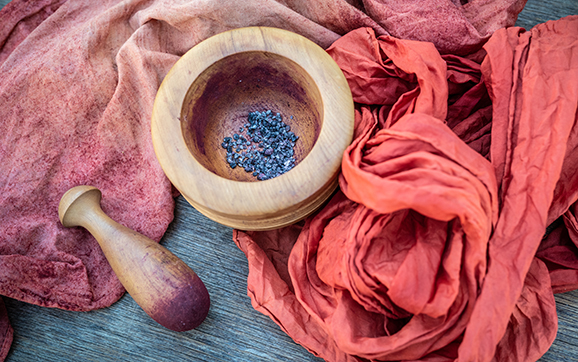 Experimental archaeology students set up a station behind Comenius Hall where they dyed different fabrics with natural pigments from madder (orange or red); woad or indigo plants (blue); the weld plant (yellow); and the insect cochineal (red).

While the scientific method is an important part of experimental archaeology, often the experiments look more like play than research. But what’s wrong with that? Famed archaeology professor Bill Schindler, an expert in primitive technology and ancestral diets at Washington College in Maryland, says the true value in experimental archaeology in higher education is a concept he calls “soul authorship.” “For the first time in students’ lives, we allow them to author something completely from start to finish,” he says.

Paxton finds that students take a great deal of pride in creating something with their hands—knapping an arrowhead, weaving a basket, or dyeing fabric. “Making something from what’s available to you is the essence of being human,” Paxton says.

Bardsley says students come away from the class with an increased respect for the abilities of people of the past and their interdependence. “Students realize how smart, versatile, and persistent they were and how they relied upon each other’s unique skills,” she says.

Experimental Archaeology is so much fun, alums regularly come back to campus for more, especially when the class invites the Moravian University community to take part in hands-on dyeing activities. This past spring, the class set up buckets of sappanwood (magenta), Osage orange (yellow), and indigo (blue); explained the origins of the natural dyes; and showed visitors how to dye their own scarves, bags, socks, and other fabrics.

“I loved this class and sharing living history with members of the Moravian community,” says Bergsma, who took part in the spring 2020 event. “We know from books what kings and generals and the rich (of the past) were doing, but what was the potato farmer’s life like? That’s the appeal.” 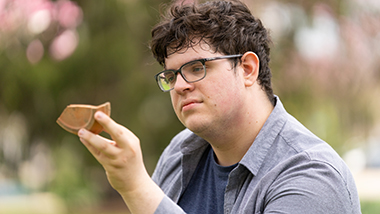 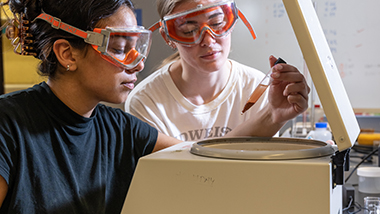 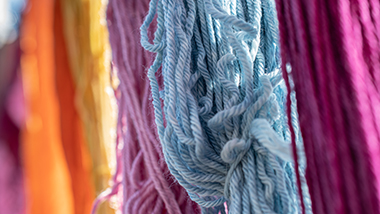 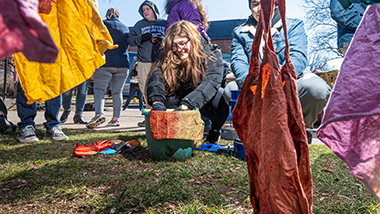 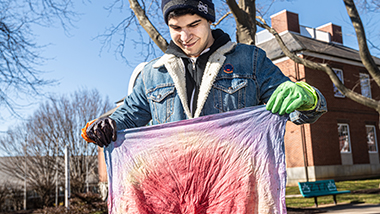 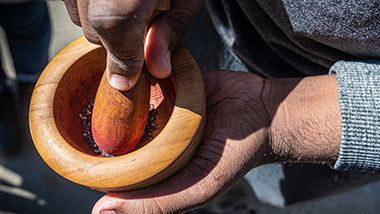 Above: Passing students, staff, and faculty were invited to dye scarves, cloths, and tote bags.

Students also learn to forage and prepare meals using historic ingredients and cooking methods because, well, back in the day, you couldn’t exactly run up to Wegmans for a package of prewashed spring mix and box of mac ’n’ cheese. The class experiments with cooking quinoa using two methods, with the pot directly over a fire (less time-consuming) and in an earthen pit filled with hot rocks (more labor intensive but quicker to reach a boil). They bake chicken stew with hot rocks, fry pancakes made from boiled stinging nettle (tastes like parsley), and wash them down with an earthy tea made from spiceberry-bush twigs.

Experimental Archaeology class culminates in a weekend camping trip to the Deputy Field Study Center, which gives students the opportunity for more elaborate experiments and time-consuming experiences like firing pottery in bonfire pits, hunting squirrels (unsuccessfully), and building shelters. During her overnights in the woods, history major DeAnna Stocker ’19 and her crew built a burdei, an Eastern European–style pit house dug halfway into the side of a hill and finished with logs, sticks, and mud/straw plaster. Her task: collecting cattails to make roofing material.

“I was very new to camping,” Stocker says. “But it was a cool bonding experience with classmates. This class takes you out of the books and into the world. You can connect the dots of history more readily than when reading a book and writing a paper about it.”

Now an archives assistant for the Sigal Museum and Northampton County Historical and Genealogical Society in Easton, Stocker says the class has given her something unique to talk about during every job interview she’s had. “How many people can say their professor [Paxton] cooked them chili dinner on an archaeological camping trip?”