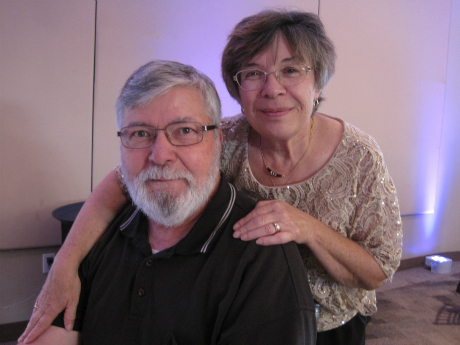 When George Myers graduated from Moravian in 1982, he had a lot to celebrate. His degree marked more than a decade of night classes, which he attended after working full days at the Fuller Company in Bethlehem. At the time, he was 34 years old and a navy veteran of the Vietnam War.

With his bachelor’s degree in hand, Myers kept the momentum going and went on to get his MBA at Kutztown—also at night—and to embark on a successful career at Mack Trucks. Today, Myers and his wife are working to assist other returning adult student veterans in achieving the same goals with the Veterans Book Fees Fund.

“When I got out of the Navy, the GI Bill® was  $10,000,” George says. “These days, if an 18-year-old male or female decides he or she wants to  serve their country for four or six years, that individual gets limited money. Once you leave high school, the doors to scholarships close—there’s limited money to help returning adult veterans with higher education,” he says.

So, starting in 2009, George and his wife, Nancy, began seeding their fund, which provides $500 for returning adult veterans who attend Moravian. They’ve helped at least 10 students so far. “I know $500 doesn’t do a lot, but if it helps just a little bit with books, gas money, and other things they need, we’ve achieved our goal,” he says.

“We want to continue to support veterans and returning adults, and hopefully we will have enough left to give something back to Moravian because Moravian gave me so much when I was there,” George says.

A hand-written note from one of the students the Myerses have helped reads: “I’ve had a hard transition from the military life to student life, and you’ve helped me with this.” And from another: “Thank you for giving me money for necessities not covered by scholarship.”

The Myerses say they also started the Veterans Book Fees Fund  in the name of education. “As a retired teacher from the Allentown School District, I value education,” Nancy says. “So anything we can do to support those who need extra help in furthering their educations, we want to do it.”

The couple hopes their fund not only helps adult veterans pursue higher education but also brings awareness regarding the need for similar funds to help returning adult vets. “We want to encourage other Moravian alumni who are veterans to give to the fund or do something similar,” George says. “There’s nothing else like this on campus, so we are ahead of the curve,” Nancy adds.

As part of their legacy, the Myerses also plan to donate to Moravian in their will. “We want to continue to support veterans and returning adults, and hopefully we will have enough left to give something back to Moravian because Moravian gave me so much when I was there,” George says.