A Modern View of Medieval and Early Modern History

The 10th Undergraduate Conference in Medieval and Early Modern Studies—sharing discoveries about the past to help us understand our present condition.

An iMovie arguing the character of the notorious Mary Frith (aka Moll Cutpurse), a Google map of shrines in Rome and a fresh perspective on Shakespeare’s Caliban, these are just a few of the 83 undergraduate presentations given at the annual Undergraduate Conference in Medieval and Early Modern Studies held on campus Saturday, December 5th. This was the 10th anniversary of the event, which is one of the largest--if not the largest--undergraduate conferences in the humanities held in the United States, drawing roughly 200 participants: students, faculty and listeners from 37 colleges and universities around the country.

Here are some highlights from this year’s event.

Working in a new medium to present their research, students in Bardsley’s course Women in Europe, 500-1700, created iMovies, each featuring the life and character of an important female figure from the time period:

As an audience member pointed out, the students’ explorations remind us of the importance of critical thinking and how people, then and now, tend to adopt a widely held viewpoint without giving deep consideration to the multiple facets of a person’s character or an event.

Regarding the iMovie medium, students generally found it challenging, especially when they needed to re-record a voiceover and ask their friends for a repeat performance. But all agreed that they were pleased with the final result and that the format allowed them a wider range of expression than the traditional research paper. “The iMovie allowed us to use multiple layers in presenting our subjects, which made them richer,” says Lewis. “I was able to portray the nefarious events and actions surrounding Lucrezia Borgia against a backdrop of music and imagery that helped reveal her pathos.”

A Google Map of Roman Shrines

Technology met Medieval and Early Modern History in a presentation from Drew University students Kelly Bronner and Gina-Anne Cameron-Turner, “Street Views of Street Shrines: Digital Mapping of Rome’s ‘Edicole Sacre’.” Working in conjunction with faculty research led by Louis Hamilton, Associate Professor of Comparative Religion, students used Google to map street shrines throughout Rome. Where shrines were not visible via Google, research team members in Rome were directed by the home-based crew to the approximate area where they would pinpoint the street locations.

In addition to mapping the shrines, students were able to collect data on visitation and found that overall roughly 11 percent of the people of Rome visit these street shrines. Asked why that number was so low, Bronner replied that she considered it significant when you take into account the heavy tourism in Rome, which likely discourages personal prayer and reflection at these street sites.

And what did the Drew University students think about the Conference? “It gave us an opportunity not only to do interesting research but also to be able to share that research and listen and learn from others,” says Cameron-Turner.

After lunch, attendees were treated to a plenary session featuring Michael Drout, professor of English and the Director of the Center for the Study of the Medieval at Wheaton College. (Fun fact: Drout and President Bryan Grigsby were classmates working toward their PhD  at Loyola University Chicago.) With superior scholarship and good humor, Drout delivered his presentation: “Heroes and Monsters Walking the Named Lands of the North: Beowulf, Legend and History.”

If you’re inclined to equate Beowulf with boredom, Drout’s delightful delivery of several lines from the text in Old English followed by a modern English overview of this grisly tale would have you heading to Reeves Library after the presentation for the complete work.

In close examination of the epic poem, it was as if Drout were restoring a painting marred by time and alterations. His meticulous reconstruction of the text examined possible errors made by the text’s scribes. “The scribes were notorious for misunderstanding proper names” he explains, “and frequently altered them to common nouns.” These errors would significantly alter what Drout sees as the poet’s original intent and the poem’s political context.

At the close of his talk, Drout spoke to the overarching thesis of Beowulf, linking the poet’s medieval theme to modern times: Bad things happen to those who have committed horrific acts, but death ultimately comes to all of us, even the innocent as it did to the men and women in the World Trade Center on September 11, 2001.

Following the day’s presentations, a multimedia performance and reception cosponsored by the Conference and by Trinity Episcopal Church in downtown Bethlehem drew almost 100 attendees. Galileo’s Daughters presented early music, readings from contemporary texts, and illuminating images in a program entitled, “Perpetual Motion: Galileo and His Revolutions.” The program, made possible in part by the support of LVAIC and the University Arts & Lectures Committee and through the generosity of Trinity Church, was followed by a festive medieval-themed reception.

The Moravian University Undergraduate Conference in Medieval and Early Modern Studies is an extraordinary exchange of student work in all disciplines of the humanities, united by a critical approach to the subject matter that often elicits reflections on the world we live in today. Come join in the celebration next December. Special thanks to event organizers Sandy Bardsley and John Black; to Jim Skalnik, assistant dean for academic advising, George Diamond, professor emeritus of English, and Martha Reid, professor of English, who have generously given their time year after year; and to the many Moravian University faculty and student volunteers who make the conference not only possible but a tremendous success!

A session on Spanish Narrative Prose presented entirely in Spanish and moderated by Claudia Mesa, associate professor of Spanish, was held in the afternoon and included the following students and their work:
•    Breanne Pirino, “Have Relationships Changed Since the Early Modern Period? A Comparison between Almodovar’s Atame (1989) and La fuerza de la sangre by Miguel Cervantes”
•    Alejandra Kaplan, “Female Victims Through the Eyes of Maria de Zayas’s La inocencia castigada and Cervantes’s El celoso extremeno”
•    Gabrielle Marotta, “A Christian King’s Perspective on Seville’s Culture in the Middle Ages through the Cantigas de Santa Maria by Alfonso X”
•    Catherine Lamplugh, “The Cost of Happiness” 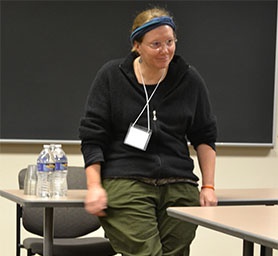 Throughout the day, attendees were treated to a variety of period demonstrations and displays:

•    Music by the Moravian Celtic Ensemble directed by Alison Gillespie
•    A demonstration of spinning and weaving of medieval textiles by Eva Mergen, Creative Fibers, Southampton, PA
•    Calligraphy by Therese Swift-Hahn, Bella Scrittura Calligraphy and Design, Pennington, NJ
•    A poster display by members of Moravian University’s Art 113 taught by Jan Ciganick, professor of art history
•    A demonstration of Medieval and Early Modern Themed Board Games
•    A display of books relative to the time period by the University Bookstore 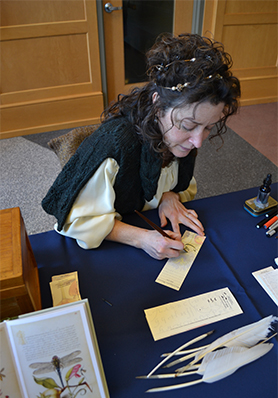 Three cheers for the following students on presenting their research.
•    Brandon C. Marth, “Exploring the Nature of Miranda”
•    Chris Hassay, “Monstrousness? Caliban and his Role in The Tempest”
•    Joseph Gioia, “Anglo-Saxon Christianity: Blending of Christianity and Paganism in Anglo-Saxon England”