President Bryon L. Grigsby ’90 with Lea B. Grigsby and Moravian mascot Mo on the back porch of the Frueauff House.

Celebrating the 200th birthday of the John Frederick Frueauff House

Most of us know the attractive Federal style red brick home at  79 West Church Street in Bethlehem as the President’s House or Frueauff House. But these are only two of the names and roles the building has had in its 200-year history. It was originally built in 1819 as a residence for the ninth principal of the Moravian Seminary for Young Ladies, Johann Friedrich Früauf (often anglicized to John Frederick Frueauff). It was the first building on Church Street to be made of brick. 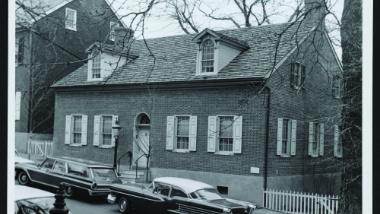 The house as it looked shortly after its restoration in 1961 ... 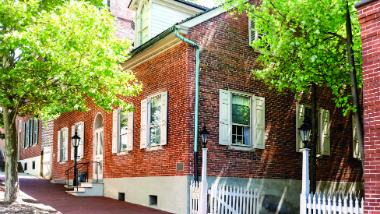 and as it looks today 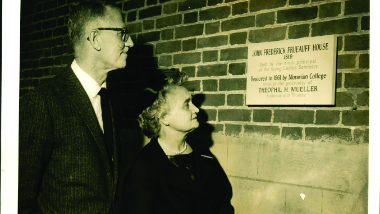 Frueauff (pronounced roughly frueh-yowf), whose tenure as principal lasted from 1819 to 1821, was born in Neudietendorf, Saxe-Gotha, in 1762. After being educated at Barby Theological Seminary, he came to Pennsylvania in 1788 and filled various ministerial and educational roles in Lititz, Schoeneck, Nazareth, Philadelphia, and Bethlehem. He was also an accomplished musician, playing first violin in an ensemble organized to perform Haydn’s string quartets. He retired as principal in 1821 but continued to live in the home on Church Street and serve in other ministries until his death in 1839. He is buried in Bethlehem’s God’s Acre cemetery. Aside from a brief interlude while Main Hall was being built, the Frueauff family lived at 79 West Church into the 20th century. In 1867, they expanded the house from 1 ½ to 2 ½ stories, enlarged the window openings on the first floor, and added a heavy Victorian frame around the front door. They also replaced the original Federal style interior staircase with a more ornate Victorian one. 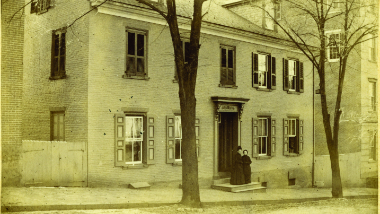 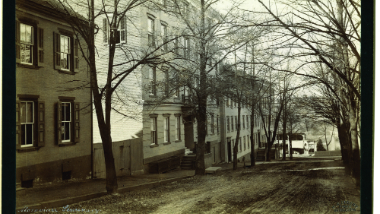 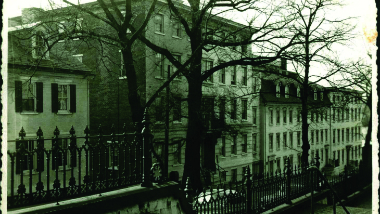 The exterior of the Frueauff House changed little between 1867, when a second story was added, and 1961, when it was removed.

A Home Becomes a Hall

The Frueauff family sold its home on Church Street to the Moravian Seminary and College for Women in 1914. The school first rented the space as apartments and then repurposed it for office and classroom use, at which time it became known as East Hall. In 1942, the music department of the women’s college was relocated here and the building was renamed Wolle Hall in honor of J. Fred Wolle, founder of the Bethlehem Bach Choir, and his father and uncle, Francis and Sylvester Wolle, also principals of the Bethlehem Seminary for Young Ladies. By 1951, Wolle Hall housed the editorial office of the college’s student newspaper, The Belfry, on the garden level; the offices, studios, and classrooms of the music department and the office of the alumnae secretary on the first floor; and rooms for two teachers on the second floor. 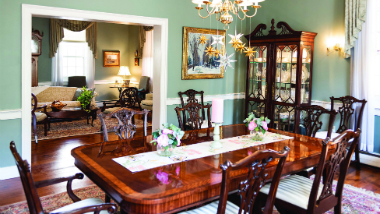 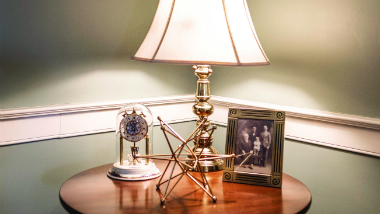 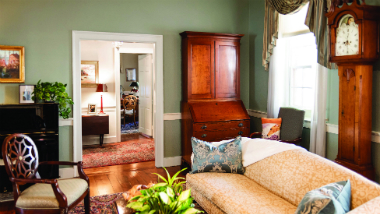 The tall secretary desk shown in the corner above once belonged to George Washington.

When the Moravian College for Women merged with the Moravian College and Theological Seminary in 1953-54, the trustees of the new Moravian College faced the difficult question of whether to retain the buildings on the Church Street campus. Thankfully, they decided to keep them. But Wolle Hall was not easily repurposed to modern use. The college considered using  it as a dormitory; meanwhile, as of 1958, it was being leased as office space for the Kemerer Museum and the Christian Education Board of the Moravian Congregation of Bethlehem.

A more permanent solution came in 1959, when the college received a proposal from one of its current trustees who had also been a chairman of the trustees at the Moravian Seminary and College for Women. The son of a Moravian bishop, Theophil H. “T.H.” Mueller was a graduate of the former Moravian College and Theological Seminary (1910, Sem 1912). Having enjoyed  a successful career as a business executive, Mueller offered to pay for the historic restoration of the former Frueauff home in exchange for the guarantee that he could lease the space for the remainder of his life. The college accepted his offer, a lease agreement ($2,000 per annum) was drawn up, and work commenced soon thereafter.

Historic Bethlehem Inc. directed the restoration, with assistance from historical consultant Ernest M. Frank of Colonial Williamsburg. College architect George K. Trautwein worked on the project pro bono, and E. C. Machin of Allentown acted as building contractor. Steady progress was made throughout 1960 and 1961, with a scheduled completion date of August 1, 1961. The work would reverse the changes made in 1867 that had added a second story and “Victorianized” the structure. As part of the historic restoration of the streetscape, a telephone pole that had been located between 87 and 89 West Church Street was also eliminated and the phone cable rerouted underground. This allowed the entire row of Moravian College buildings west of 69 West Church Street to be free from overhead telephone lines.

Grigsby finds  that living in this 200-year-old residence deepens his connection
with history—particularly the history of Moravian College.

Mo scopes out the Benigna Pleasure Garden from the back porch of the Frueauff House, one of the Grigsbys’ favorite spots to relax.

On July 27, 1961—just five days before he was scheduled to occupy the newly restored Frueauff House—T.H. Mueller passed away unexpectedly at his country home in Litchfield, Connecticut. Besides the loss of their friend, the college trustees now struggled with another issue: what to do with the Frueauff House now that Mueller would not be leasing it. They were approached by Hughetta (Mrs. James P.) Bender, then involved in the women’s auxiliary of Historic Bethlehem, who offered to carry out Mueller’s plans for furnishing the house in exchange for the right to lease it. As of October 28, 1962, Bender occupied the house and had furnished it with fine original Federal period furniture pieces by Sheraton and Hepplewhite, among others. She also created a backyard garden appropriate for a town house of the period, including plants that grew in Bethlehem at the time the home was built.

Moravian College hosted a dedication ceremony and open house at the newly restored Frueauff House on October 28, 1962. In his remarks, President Raymond S. Haupert paid tribute to the late T.H. Mueller: “The desire to restore the Frueauff House reflects T.H. Mueller’s deeply rooted love for Bethlehem—both in terms of its historic past and its living present. Even though his hope to live on historic Church Street was not to be realized, the beauty and high quality of the Frueauff House restoration will always stand as an expression of his devotion to Bethlehem.” A musical program in Main Hall following the ceremony featured an original piece composed by John Frederick Frueauff and performed by the Moravian College Choir under the direction of Richard Schnoz.

By the time Mueller’s estate was settled in 1965, he had contributed more than $75,000 (about $641,000 in 2019 dollars) to the college in support of the Frueauff House restoration project, plus more than $200,000, some valuable pieces of furniture, and the books from his library. Mueller had established two endowment funds for students—one in memory of his father, Bishop Karl A. Mueller; and another in memory of his first wife, Ermyl Christian Mueller. (His second wife, Helen Scull Mueller, had died in 1960, and he had no children.) Funds from Mueller’s estate helped build Reeves Library and the Collier Hall of Science, which were planned as part of the second phase of the college’s campus development program. 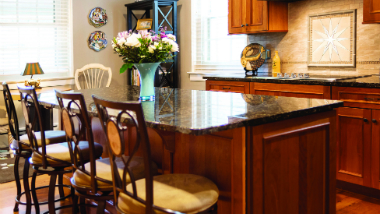 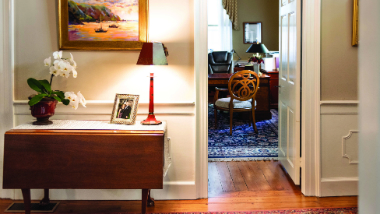 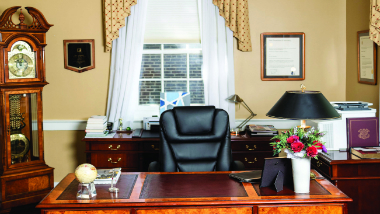 Although home to cherished pieces like George Washington’s dropleaf table, the president’s house is comfortable enough to allow for working, entertaining, and family living.

Hughetta Bender’s tenancy in the Frueauff House did not last long, as Herman E. Collier, who was elected president of the college in April 1969, decided that the building would be ideal to serve as the presidential manse. The Collier family moved into the home in August 1969 and spent the next year furnishing it to their taste. It was during President Collier’s tenure that the driveway was built in the space between Main Hall and the Frueauff House so the home’s residents would have a more private entry. Following Collier, two more college presidents spent their tenures in the Frueauff House: Roger H. Martin (1986–1997) and Ervin J. Rokke (1997–2006). After Priscilla Payne Hurd offered him another home on the Main Street Extension that better fit what he needed, Christopher M. Thomforde (2006–2013) elected not to live in the Frueauff House, and it was occupied instead by a college dean. 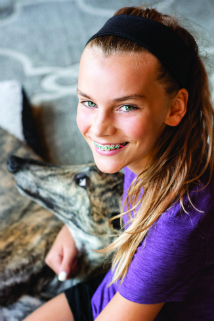 When Bryon L. Grigsby, our current president, was elected in 2013, he opted to restore the tradition of the John Frederick Frueauff House as the official residence of the college president. “It is the president’s house for Moravian College,” President Grigsby says. “It just makes sense to live there. The Frueauff House is a wonderful home. It is central to everything. You are around the corner from all the restaurants on Main Street and our historic bookstore, across the street from Central Moravian Church, and a short walk away from city hall and the library for meetings. I love my morning walk with Mo and Benny around the Colonial Industrial Quarter and up Main Street. And it is great to jump on a bike and take off on the towpath to either Easton or Allentown for a quick workout. It is just a great place to live.”

When asked what space inside or outside the home is his family’s favorite and why, Grigsby does not hesitate. “Our favorite place is the covered porch on the back of the house,” he says. “It is a great place to have a cup of coffee in the morning or to read a book. You can see students walking past the Benigna Pleasure Garden and talk to students in Main Hall. It is a great spot to relax.”

Grigsby finds that living in this 200-year-old residence deepens his connection with history—particularly the history of Moravian College. “I think it regularly reminds me of our noble history as caretakers of what the Moravians started,” he says. “On the south campus, you are constantly reminded of the 1742 founding as  a women’s school and that this house represents the merging of the men’s and women’s colleges in 1953. Moravian continues  to evolve; it preserves its history and respects its history, but it is not paralyzed or stagnated by it. It continues to be relevant, even revolutionary, for its students, alumni, faculty, and staff.”