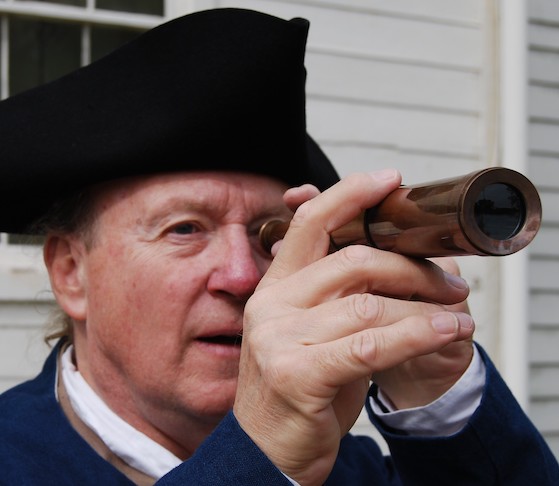 Writer, author, and storyteller  John L. Moore mines the Moravian Archives to delve deeper into the stories of Pennsylvania’s first peoples. He has donated 14 of his books  to Reeves Library.
By Steve Neumann ’94, G'18

John L. Moore has been interested in the stories of Native Americans ever since he was a boy growing up in Somerville,  New Jersey, home of the Lenape, or Delaware, people for centuries. So when he got to Moravian College in 1960, he was thrilled to discover the Moravian Archives, then located in the north wing of Colonial Hall. This institution preserves the records of the Northern Province of the Moravian Church in America, including many diaries and journals of the Moravian missions in North America dating back to the 1740s. Those manuscripts documented the Moravians’ interactions with the Native Americans of the area and proved a valuable resource for Moore’s lifelong vocation as a writer and storyteller.

Though Moore, author of 14 nonfiction books about the Pennsylvania frontier, attended Moravian College, he ultimately didn’t graduate. Swept up in the allure of American postmodernist literature of the 1960s, Moore harbored dreams of becoming a famous novelist like Ernest Hemingway, J. D. Salinger, and other icons who never graduated, so he dropped out after a couple of years. “Toward the end of my time at Moravian,” Moore said,  “I started exploring the countryside and found places where Moravians had missions, and over the years, I’ve pursued that  and have been based in Central Pennsylvania since 1970.”

Moore originally moved to Northumberland, Pennsylvania— a city rich in frontier history at the confluence of the north and west branches of the Susquehanna River—to satisfy his curiosity about the fate of Native Americans. Over the years, Moore  has participated in archaeological excavations of several Native American sites, including the village of Nain in Bethlehem, the City Island project in Harrisburg, and a Bloomsburg University dig in 1999 at a Native American site near Nescopeck. But because he also needed to earn a living while doing that research, he took a job with a local newspaper when he moved to Northumberland.

Moore would go on to have a long career in local and regional journalism, first as a general assignment reporter  for the Daily Item in Sunbury and most recently as the editor of the Eastern Pennsylvania Business Journal in Bethlehem. He retired in 2012 and since then has devoted his time to his passion for historical nonfiction.

Moore’s career as a book author started about 20 years ago as  he was writing a regular history column for the Daily Item. One day he decided to collect a bunch of his history columns into his first book, Traders, Travellers, and Tomahawks. “And then I just kept on writing columns and writing additional materials for subsequent books,” Moore says. “Over time, I’ve done 14 books, and the 15th is about half done.”

Death by Burning is the working title of his 15th book, which tells the story of the Gnadenhutten Massacre, one of the most heinous war crimes of the Revolutionary War. In 1782, between 100 and 200 Patriot militia and frontiersmen from western Pennsylvania slaughtered nearly 100 peaceful Native Americans at the small village of Gnadenhutten, on the Tuscarawas River in what is now Ohio.

There’s more to the story than that, of course, and one of Moore’s best sources from that time is the Moravian missionary John Heckewelder. “He spoke the Delaware language fluently,” Moore says. “And not only were Delaware Indians members of his congregation; they also became his friends and his informants. Heckewelder was, in many ways, a folksy storyteller, and he wrote down all sorts of things that the Delaware Indians told him.”

In addition to his prolific writing, Moore has been bringing his subjects alive as a professional storyteller himself, dressed in period clothing and with props, at various locations around the state. “My persona is ‘Susquehanna Jack,’ ” Moore says, “modeled after an 18th-century Pennsylvania backwoodsman named Tom Faucett who took part in the July 1755 battle known as Braddock’s Defeat near present-day Pittsburgh.” Faucett told people the story of how he had shot Edward Braddock, a British major general, and ended the battle. He claimed that Braddock was responsible for the death of his brother Joseph. “There’s no evidence that Faucett killed Braddock,” Moore says, “but people detested Braddock and loved to hear Faucett tell the story.”

While the Moravian Church archives have been a boon to Moore’s storytelling, he has long made use of various other libraries, historical societies, and large volumes like the Published Pennsylvania Archives series for his books, mining them for  18th- and 19th-century letters, journals, memoirs, and transcripts of official proceedings such as interrogations, depositions, and treaties. Since the advent of the internet, however, much of his research now takes place online. What used to take hours of travel and research time, and sometimes an overnight stay in a hotel, now takes place in the comfort of his own home.

Moore also keeps an eye out for modern historical books as they come online. “What I find is that popular writers who are well known in the field tend to write about the key events,” Moore says. “I’m trying to get off the highway and wander the back roads of history and tell more of the story.”

Steve Neumann ’94, G’18 is a freelance writer living in New Jersey. All of his writing can be found on his website: stephenneumann.com.