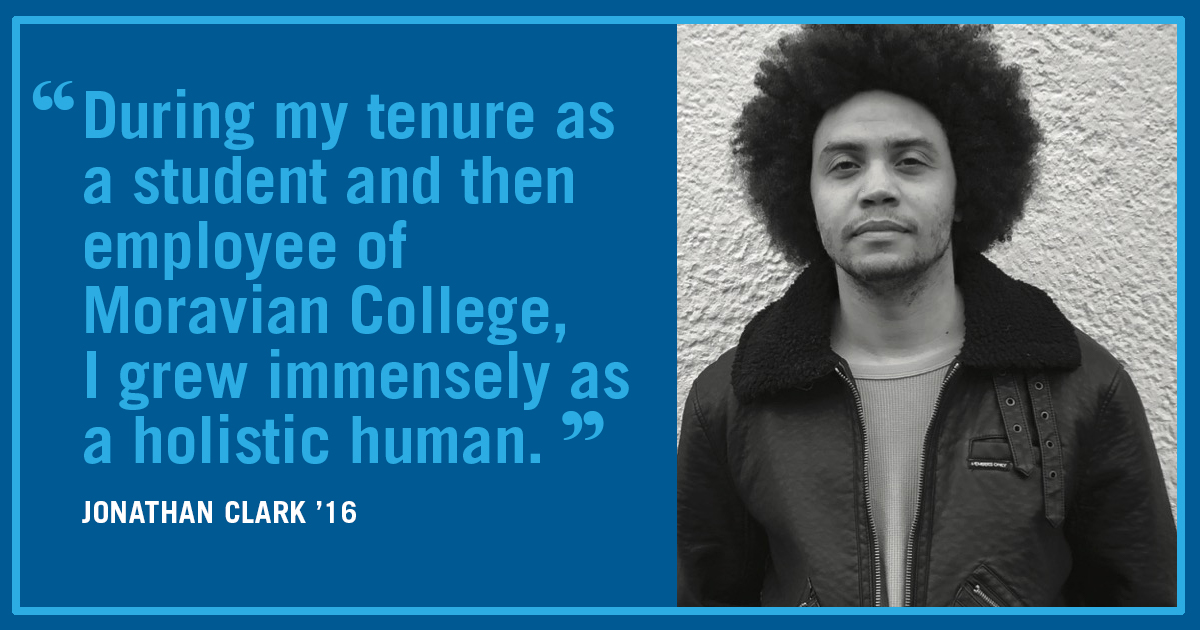 During my tenure as a student and then employee of Moravian College (2014–2019), I grew immensely as a holistic human. My professors, mentors, and colleagues challenged me to take risks, to follow passion, and to pursue a life of purpose in service toward others. I remember first being drawn to Moravian’s approach to shaping community, which has always been to empower our community toward harnessing the “little revolutionary” we each can contribute to the world. And since leaving for Louisiana to pursue a master’s degree in creative writing, I continue to hold dear, within both my writing and teaching, Moravian’s mission: the belief that my work can make and is making a difference. The Moravian College community has always encouraged and supported my journey, for which I am forever honored and grateful.

American Myth—
A Poetics of Passage-Making

Do you remember or are you that memory? —Fred Moten

It is when you are asking about something that you realize you yourself have survived it, and so you must carry it, or fashion it into a thing that carries itself. —Anne Carson

Dear documentarian, dear poet, what will you renovate? —Susan Briante

The critic Joseph Harrington claims of poetry that “if poetry is an archive, then so too is the poem—or any text—and the writer is a kind of archivist.” And so, as an archivist and as a documentarian poet, I have chosen to use the tools of the archive to make a memoir collection of poems, American Myth, inspired by what has been studied in works such as Nox, by Anne Carson, and Ghost Of, by Diana Khoi Nguyen.

James Kastely, an expert in the history and theory of rhetoric, once wrote, “pay attention to the resistances in your own writing—those are the places that are offering you the possibility of being original.” I credit this as a principal source for helping to generate the conceptual basis this poetry project requires: to merge the contrasts of two disparate histories in order to reveal their interconnectedness—an interconnectedness between the speaker’s dual identities, which are informed by the life impressions made on the speaker before his adoption and afterward. And since this speaker never meets his biological parents, the only way to gap-fill spaces where an abundance of murkiness lingers is by studying the nuances within salvaged legal documents and hand-written questionnaires, revisiting word-of-mouth stories from adoptive parents and other parties involved in the adoption process, and trying to contextualize photos that keep as many secrets as the security safe and garage boxes they’d been kept in—all of which serve as ephemera for the writing and visual components of the page.

Essentially, the speaker of this poetry project—which I imagine to be a ghost of the poet’s past—seeks to, as Fred Moten says, “disavow the conclusion” of everything he’s been told of himself, insofar as he considers what it means to give oneself permission, permission to be a historian of oneself. The poet Susan Briante states of using documents in poetry, “the first step in extending the document might be to discern its limits and to situate it against other points of reference that expand its narrative, reveal its origins, and complicate its meaning.” Therefore, by the speaker recording a new record of the original record(s), the speaker attempts to fashion his own palimpsest for which to satisfy his obsession of needing to know—the speaker’s obsession with transcribing the poet’s history that exists between the intangible and tangible, where ghosts exist, moving within the intangible and tangible of a language of gaps, elusiveness, slipperiness. “Our triggering subjects, like our words, come from obsessions we must submit to, no matter the social cost,” says the poet Richard Hugo of the private poet. Approaching the project through this lens requires that I deeply consider the poetics of exile and elegy; writing from within these poetic frames may open room for implicating the reader to be in passage with the speaker, into the unknown, moving together in sync, within and toward a process of (self) discovery—a process that must acknowledge the messiness in excavating the skeletons of one’s past despite not being given permission; a process that reflects the haunted-ness the speaker harbors but can no longer contain inside.

Furthermore, the speaker of American Myth engages with the French philosopher Jacques Derrida’s concept of hauntology, which is “the return or persistence of elements from the past,  as in the manner of ghosts.” A focus then of this poetry project is to develop an entanglement with and tethering to the past—the hauntology of one’s history—in order to excavate those impressions from a past haunted by its own negative space and to find a writing that attempts to trace these impressions that linger as bruises on the present. Thus, in using these documents, stories, and photos, the speaker can probe through elisions and erasures of his history; or as Briante further says, “sometimes we need to deface the documents to write back through them or into them, to fill in what’s been left out or suppressed, to break a cage of words or reveal a cage of words in order to speak some version of a truth.” And so, I keep asking, what does it mean to be a stranger to oneself, to have to negotiate a space for the stranger and familiar to coexist? The speaker addresses these questions by being in dialogue with the ghost of his identity, history, and culture, in that intimate and unsettling dream-like place of negative space.

lovechild in this context