The Art of Jonathan LATIANO '06

His installations may be impermanent, but their artistry is a lasting legacy of his Moravian College experience.

Jonathan Latiano is a master creator and builder in the tradition of artists throughout the ages—with a modern perspective and philosophy. He is one of today’s exciting figures in the world of installation art. Outdoors in the cityscape, within a museum or institution, or as part of an arts festival, Latiano brings to life ephemeral and otherworldly structures, melding art with science, immersing viewers in unexpected realities.

Beyond merely viewing an installation, visitors participate in the actuality of its three-dimensional existence in the here and now. His work leads them to experience insights and emotions that will change their perceptions of the mundane world.

Latiano’s nontraditional materials and techniques advance ideas inspired by history, geology, physics, and zoology. Ultimately, they lead viewers to behold the fragility and impermanency of life and our uncertain future on this planet.

“I’m trying to find a balance in my work,” Latiano says, “between the narrative—the story a work of art tells—and the materials.” 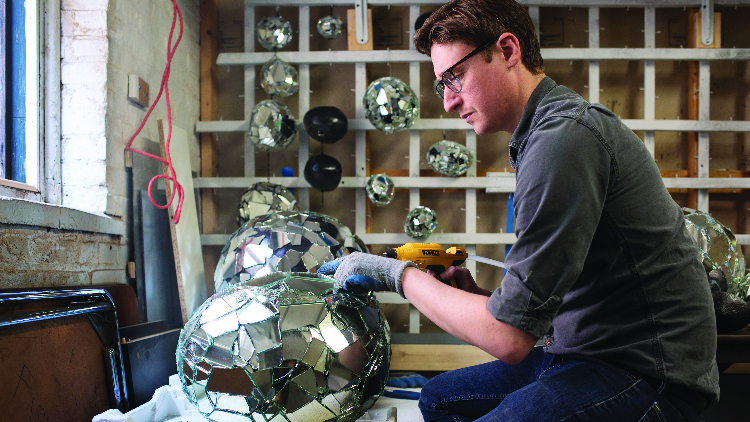 The power of Latiano's art is generated by that balance, as is apparent in examples of his work:

Spikes of icy white acrylic resin and crystallized salt thrust through a splintering wood floor, at once beautiful and frightening. Points of Contention, 2011 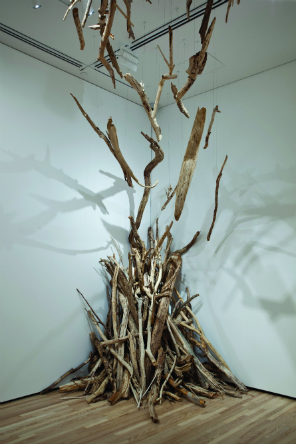 A room entirely swathed in salt envelops visitors in a disorienting otherworldly environment evoking geological structures, pure white and beautiful but no longer living. Installation in progress, planned for an upcoming show

“Moravian is where it all started for me,” Latiano says. Diagnosed with a learning disability as a child, he was told not to work too hard and not to bother with the SATs because he “wasn’t college material.” His parents and a few teachers were supportive, but the academic system dissuaded him from setting his sights on a four-year liberal arts college. Latiano enrolled at a technical animation school to learn tools and techniques for a career in that field. He excelled, earning excellent grades in his freshman year. But something was missing. Feeling unfulfilled and yearning for more, he began researching and applying to colleges where he could pursue fine art, history, philosophy, and science.

It was a struggle: Without SAT scores,  no college on his list was willing to take a risk—until a Moravian admissions counselor, Erika Mondok, as he says, “literally changed my life.” Moravian accepted him into the Class of 2006 two weeks before the fall semester began. “As an undergrad,  I fell in love with the arts and the sciences.” He still had in mind that he would become an animator, but by senior year he realized that he was destined to be a fine artist.

After graduation, Latiano earned his MFA in 2012 from the Maryland Institute College of Art (MICA) in Baltimore. In 2013, he won the prestigious Mary Sawyers Baker Prize in Art, which awarded him his first solo museum exhibition at the Baltimore Museum of Art in 2014. It included his installation memorializing the now-extinct Chinese river dolphin, Flight of the Baiji. A PBS television series, seen nationwide, featured his work.

It was a struggle: Without SAT scores,  no college on his list was willing to take a risk—until a Moravian admissions counselor, Erika Mondok, as he says, “literally changed my life.”

In 2014, Moravian College named him Rose and Dr. Rudy S. Ackerman Visiting Artist and invited him back to the Bethlehem campus to give a lecture about his first 10 years as an artist. The following year, Moravian honored him with its Outstanding Alumni Award. Latiano served as an adjunct professor at  the Corcoran College of Art and Design  in Washington, DC, and spent the past  five years teaching at MICA and working on new installations. He calls himself a tough teacher and notes that at the end of his students’ first semester he delivers “an intense two-day marathon lecture that spans his entire artistic career.” He believes many of his star students will go on to become leading figures of the art world.

Latiano’s Baltimore studio is in stark contrast with the historic leafy campus of his alma mater and with the classrooms at MICA—and far from the idealized solitary artist garret. The gritty warehouse complex where he works is a cluster of once-abandoned red brick buildings. Inside one of them, a grey maze of dusty stairwells and dim hallways leads to his spacious light-filled studio. Occasionally, distant whirrs of a buzz saw and echoes of hammering hum in the background. From time to time,  an unidentifiable industrial smell wafts through the window above the artist’s desk. In the afternoon, an open freight train on a single track alongside the warehouse carts machinery and materials from the port to their destination.

The studio is his creative headquarters, where he builds models and experiments with new materials, invites curators and colleagues to see works in progress and collaborate, and figures out issues of site, architecture, safety, transportation, and timelines—no small challenge with large, heavy structures and remote locations. “I have my best ideas,” he notes, “when I’m deep in solving a construction problem.”

Latiano says that creating a small still  life in oil in Doug Zucco’s Painting 1 class at Moravian, of an egg in its shell poised on a linen napkin, was “the first time I ever truly looked at something.” Now he starts each new project by sketching an official charcoal portrait of his vision.

Before tackling more experimental and expansive installation art, Latiano began with the basics in college, honing his drawing skills and exploring forms from Renaissance-like still lifes to performance art. Latiano says that creating a small still  life in oil in Doug Zucco’s Painting 1 class at Moravian, of an egg in its shell poised on a linen napkin, was “the first time I ever truly looked at something.” Now he starts each new project by sketching an official charcoal portrait of his vision. Early drawings of projects in various stages of completion line the studio walls, exquisitely crafted silent observers of things to come. They are there to bear witness to the initial ideas, Latiano says, so that he won’t ignore them while deep in other works. Looking at his rendering of dark textured curved towers, he says he’s not sure how it will develop, but adds, “I know there’s something there.”

The journey from idea to sketch to site installation means letting go. After his works are installed and revealed to the public, their lifespan is for the most part limited. “Once I de-install it, it will not be shown again,” he says, emphasizing his theme of impermanence and the ephemeral nature of the work. In his formal artist statement, Latiano explains, “The art exists for the duration of its exhibition, and then it does not. There is an unsettling bite to that impermanence, but also intense weight and beauty.”

Today Latiano is more engaged and  busier than ever. This summer, he and  two interns from MICA will chronicle the artwork in the studio, create a portfolio for each project, and pack for his next move. In the fall, Latiano will relocate to Boston to teach at Merrimack College in North Andover, Massachusetts. He’s excited about the new venture and the challenge of creating Merrimack’s first studio art degree from the ground up. But he will always be a part of the thriving art scene in Baltimore and Washington. He recently bid “farewell but not goodbye” to his students and colleagues at MICA.

Before he leaves, Latiano has major works to complete and install this summer, including the Baltimore exhibition and his first corporate installation, for the new Facebook offices in downtown Washington, DC.

The Baltimore installation, on the Catonsville campus of Baltimore City Community College, will be a part of Baltimore’s annual Artscape (July 20–22), the country’s largest free arts festival. A drawing of the triangular pyramid-like structure Latiano will install hangs on the studio wall, and the adjacent model reveals more. He will layer chunks of recycled asphalt he retrieved from a company that tears up old city streets. Topping the rough dark slabs of bituminous pitch will be smooth river rocks that the artist foraged from Maryland waterways and gave an iridescent gloss with petroleum-based automotive paint. The structure’s materials and shapes compose a monument reflecting the ever-changing city, fragile urban ecology, destruction and revival. The installation will be a new kind of memorial for Baltimore, which is known as Monument City for its many public historic and contemporary sculptures.

Latiano’s work for Facebook’s offices in downtown Washington, DC, will reside in a large elevator bank that is open to the public. He will construct a crystalline architectural plexiglass structure resembling a beehive, a vast communication network in constant flux. Consistent with his focus on time and space, Latiano was inspired by connections like those Facebook enables people to make, but also  by how, as he notes, “the internet is both ephemeral and permanent.” We delete or abandon items and information, yet they continue to exist on the vast web.

The other intriguing drawings on Latiano’s studio wall represent many more projects at various stages of development for sites across the country. He’s exploring the use of sound and music in his work, new ways to program lighting effects, new disciplines and materials to inform his projects, and new places for his work to be seen.

Fascinated by ancient monuments like  the Egyptian pyramids, once-flourishing cityscapes like Pompeii and Herculaneum, and multilayered ever-changing environments like New York City, Latiano focuses a lens on past and present as he keeps pushing the boundaries for himself and for art.