Guitarists Josh Mercado '18 and Henry McCormack '18 came to Moravian College together and graduated together. They are individual talents as well as remarkable partners in performance. 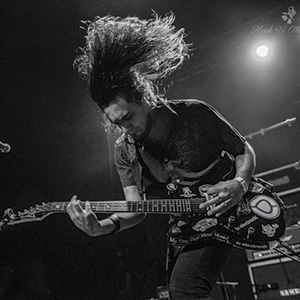 Think of classical music, and AC/DC probably isn’t the first performance ensemble that comes to mind. But when Josh Mercado ’18 and Henry McCormack ’18 played a classical-guitar rendition of AC/DC’s “Thunderstruck” at their junior recital in Peter Hall, two musical worlds collided in all the right ways.

“That was the first time we took a rock song and made it classical, and people loved it,” Mercado says. “I think we should be doing more of it, because it was cool.”

It wasn’t, however, the first time the  two played together. For Mercado and McCormack, the performance was a celebration of nearly a decade as musicians and friends. It was also a marriage of their two favorite styles of music—classical and heavy metal—which, Mercado says, “actually translate to each other really easily.”

The two guitarists readily switch back and forth between classical and heavy metal styles, playing classical as part  of their musical education at Moravian College and heavy metal on the side in their band, Twisting Life. “We’re also the dudes who did the metal version of the Moravian alma mater,” Mercado says, “which blew up more than we expected.” Both Mercado and McCormack graduated with bachelor of music degrees in May 2018.

Mercado and McCormack met through  a mutual friend in Pocono Mountain East Junior High, but it was their first class together—Earth Sciences—where they quickly discovered how much they had in common. They both played guitar. They both liked ’80s heavy metal bands like Megadeth, Metallica, and Black Sabbath. The list went on and on.

“After a few conversations, we decided to join the jazz band together,” Mercado says. In that Pocono Mountain jazz band, the two guitarists met drummer (and now vocalist) Andrew Ortega. The three musicians’ jam sessions in between the jazz songs they were supposed to be playing became a springboard into their parallel music careers. “Then one day, we said, ‘let’s all do the talent show,’” Mercado recalls.

It was the first of many stages Mercado and McCormack would share. The performance also solidified their bond—a bond so strong that they eventually chose to attend Moravian College together to further their music careers. Ortega followed the guitarists and is currently a senior.

McCormack was the first to enroll, after meeting guitar teacher John Arnold, who also taught at the Lehigh Valley Charter High School for the Arts, where McCormack went to high school. “I came to Moravian to study more with John,” he says. Mercado was considering other schools, but after he talked to McCormack about the college, he decided to check it out, too.

Four years later, Mercado and McCormack left Moravian College with extensive musicianship skills and proficiency in classical guitar, voice, and piano. McCormack will take those skills to the campus of Berklee College of Music in Valencia, Spain, where he will work toward a master of music degree in production, technology, and innovation. “I fell in love with Spain when I first visited, and I’ve always wanted to go to Berklee, so the graduate program is the perfect next step for me,” he says.

Mercado will stay in the Lehigh Valley. “The band [Twisting Life] is what I want to do,” he says. He also plans to set up a small studio to teach guitar.

No matter where the two guitarists and friends end up, they will leave a musical legacy at Moravian College, both with their performance in the junior recital and with their metal version of the alma mater. It’s the reverse of “Thunderstruck,” a classic that translates well to metal, and it translates well to the friendship between Mercado and McCormack, too: "College ties can ne’er be broken/Formed at old M.C....”