*Bridge Out: An escape move in wrestling in which the wrestler rolls from the bridge position—back arched and above the mat—onto his stomach.

The bridge to many a corporate success, Bill Schaninger, a two-time Moravian grad (BA ’93, MBA ’98), is also the author of his own transformation. Moravian College was right there, at the inflection point.

Bill Schaninger transforms corporations. In his nearly 19 years at McKinsey & Company, the number-one management consulting firm in the world, he helped clients—all big, all buzzy, all secret—adapt to cultural shifts and market changes, maximize their talent, increase their effectiveness, and edit their strategies with an eye toward coming trends and technologies. Schaninger girds corporate behemoths.

And he is very, very good at it.

Visitor: “Have you ever sought to transform yourself?”

Settling into an airy, kitchen-adjacent room in his sprawling Saucon Valley home, Schaninger, 49, dips into what he calls his own “rather tortured tale” of trauma and, ultimately, metamorphosis.

Schaninger was born in the heart of Allentown, not too far from Saucon Valley and yet a vast and varied world away. His parents were teenagers, children really. Barely 17 when Schaninger was born, his mother left William Allen High School during her pregnancy and would eventually get a GED. She had both of her children before the age of 20. There was intense love, says Schaninger, lots of anger and swearing, little money, and the sometimes-comforting/sometimes-smothering weight of urgent, important dreams. Other than a grandfather’s abbreviated attendance, no one from either side of the family had ever gone to college. 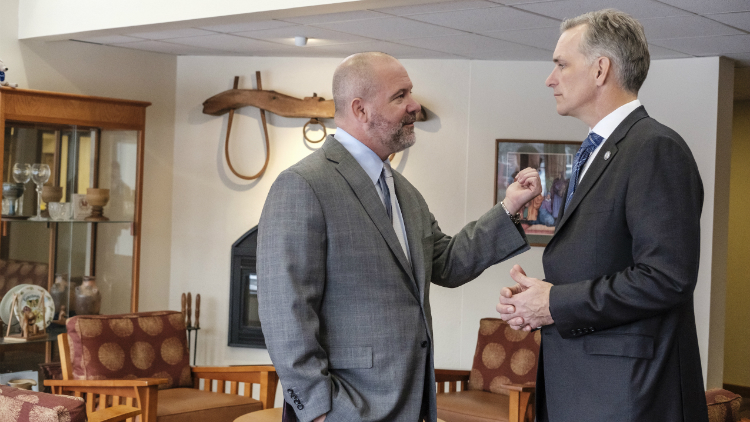 Schaninger, a member of the Board of Trustees, discusses college business with President Bryon L. Grigsby ’90.

Visitor: “But you have four degrees—a BA and an MBA from Moravian, an MS in human resources management from Auburn University, and a PhD in organizational analysis and change, also from Auburn.”

He also has what he calls a decent genetic makeup and was both reasonably bright and a solid athlete, starting in football and wrestling throughout his four years in high school. Moravian College recruited him; he wasn’t interested. “I had gotten into Johns Hopkins,” he says. “I thought I was too good.”

He also thought he wanted to be an engineer. But he blew a physics placement test for Hopkins and convinced himself that he didn’t have what it takes to survive the discipline. His parents disagreed. “They told me, ‘You will take engineering. Or pre-med. Or you will not go.’ I was like, ‘okay’—and then without telling either of them, I promptly disenrolled myself from Hopkins and enrolled myself at Shipp.” Shipp as in Shippensburg University. “It clearly wasn’t Hopkins or Moravian,” laughs Schaninger. “And it was devastating for my mother. But it was cheap, and where it led was interesting.”

Visitor: “I gather that this is the point at which your transformation begins.”

“One would have hoped. But it wasn’t.”

What it was, instead, was two years of sub-2.0 GPAs, an unimpressive streak that ended with the end of Schaninger’s childhood. The spring of his sophomore year at Shipp, his father, a printer, was diagnosed with stage 4 non-Hodgkin’s lymphoma (NHL), a cancer that begins in white blood cells called lymphocytes, which are part of the body’s immune system. NHL is a catchall diagnosis; it’s given to many different types of lymphoma that share the same characteristics. In Schaninger’s father’s case, the suspected cause was the toxic chemicals—solvents, inks, adhesives, pigments, and the like—to which he was routinely exposed at work. He died when his last round of chemo overwhelmed his organs. He had just turned 40. Schaninger was 20.

“In that moment, I had to step up,” says Schaninger. “I was reeling, but my predominant feeling, the one I remember most, was that I needed to not be an idiot.”

Schaninger moved back home, and along with working “some not great jobs,” he coached wrestling at Salisbury High School. Fast-forward a year, when he accompanied his team to the district championships: He ran into Greg Skutches, who had tried to recruit his younger, more idiotic self for Moravian. “He came up behind me and said, ‘What are you doing here? Why are you home?’ ” Schaninger’s story spilled out. “He said, ‘I’ll tell Admissions you’re coming.’”

And he did—but Admissions was less enthused than they had been three years earlier. Schaninger was required to take a class to prove himself. He chose political science with Professor John Reynolds. And the transformation began. 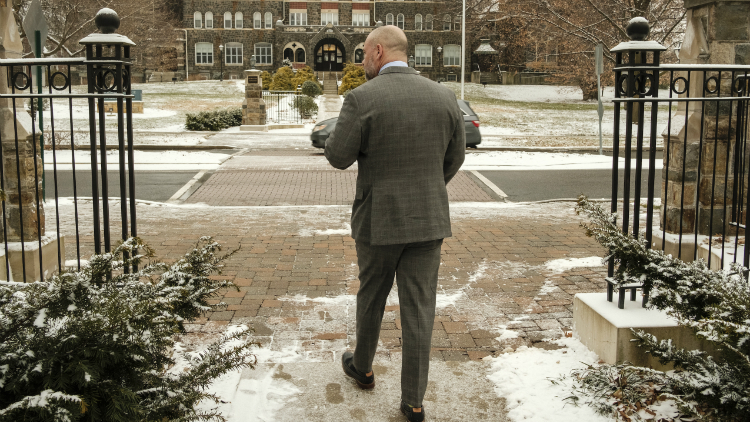 “Moravian put its arms around me when I needed it the most.”

Visitor: “You end up at Moravian, where you initially did not want to be. You return for an MBA. Now you’re on the Board of Trustees and sponsor an annual giving scholarship. What about Moravian took hold of you in those undergraduate years that didn’t when you were in high school?”

“It’s pretty simple: Moravian put its arms around me when I needed it the most.”

In one sense, this was literally true. As in high school, Schaninger played football and wrestled for Moravian. At the time, Moravian’s wrestling team, incredibly close-knit and arguably even more successful, was ranked fourth in the country. He much preferred the physicality of wrestling to football. “Football is 11 people needing to work together through a series of set plays,” he says. “I found the preparation monotonous. Wrestling is very different. It’s all raw intensity and thought. When I wrestled, I was always thinking, always assessing, always planning my next move.”

This is, in essence, what Schaninger does, and it is what he learned to do during his undergraduate years at Moravian—think. “There’s a real argument for the need in this country for a liberal arts education, an education that both teaches people to think and gives them the room to do it,” says Schaninger. “We need that, desperately.” Because thinking, one could argue, is now a little revolutionary.

This is not how Schaninger categorizes the work of McKinsey, which helps organizations across private, public, and social sectors around the world achieve their most important goals and even aided a country in its recovery from natural disaster. “Impact  isn’t just making money,” says Schaninger. “Impact is also solving problems that matter. I feel really good about being associated with an organization that is preeminent on that front. But if I’m honest, I don’t think there’s anything we do that’s as revolutionary as enrolling women. I’m so proud that we do that, that Moravian does that.”

It all comes back to where it started.

From his home in Saucon Valley, tucked into the curve of a leafy suburban street, Schaninger accepts a call from his longtime partner, Becky, an English teacher, before musing on the multiple arcs of his life. He is a thinker, a planner, a wrestler plotting his next five moves. And he has no interest in a burning platform (see 'Business 501' below). He likes to set things up. Forty-nine this year, he says he will work until he’s 55.

Very local. “There is benefit to resilience,” Schaninger says. “Many of us have experienced what currently, in the literature, would be called trauma. If you can find your bearings, find a place—physical or mental—that helps you to find your bearings. If you can thrive through it, not just survive it, it sets you up pretty well for life.”

Shop talk with Bill Schaninger ’93, MBA ’98, a principal at McKinsey and Company with advanced degrees in human resources management and organizational analysis and change. His expertise: how people behave at work.

“Burning platform” is a business term that references immediate and radical change due to dire circumstances. It comes from a story about a man on an oil platform in the North Sea. One night, he is awakened by an explosion and fire on the platform. Desperate to escape the flames, he makes his way to the edge of the platform. His options are to perish in the fire or jump more than 100 feet from the platform into the freezing waters. If the jump doesn’t kill him, he will surely die from exposure within minutes. But he has no alternative: He jumps. He survives.

And he is rescued by a boat. The point of the story: Radical change in people comes only when survival instincts trump comfort zone instincts. Or when making major decisions or solving major problems, an “emergency” attitude is required.

“Fear is a terrible motivator—terrible,” Schaninger says. “It’s coming from a place of preservation, it’s hunkering down. So it’s not in any way a growth mindset, which is what you want. Plus, it consumes an insane amount of emotional energy. And once the immediacy of the fear goes away, the amygdala, the region of the brain that has a primary role in decision making and emotional responses, turns off. Whatever gains you feel you’ve made go away. The burning-platform approach is probably a pretty accurate view of the human being’s desire to survive, but it’s a pretty naïve view of psychology.

“You’re always going to have a mix of motivations in any office. What you’re looking for as an employer is a workforce trending toward people getting jazzed about what they’re doing. You have to give your workforce a place to go and to thrive, not a place to escape from.” 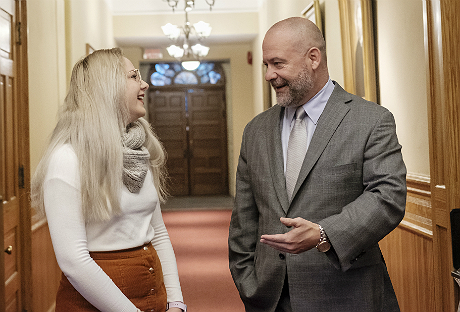 Accounting major and first-generation student Morgen Peters ’20
is earning a valuable Moravian College experience thanks in part
to the William Schaninger Annual Scholarship.

It is an empathetic experience for Peters, who herself has struggled financially and benefited from the generosity of others—specifically Bill Schaninger ’93, MBA ’98, whose annual scholarship, awarded to first-generation students, makes it possible for Peters to get an education here at Moravian College.

Like Schaninger, Peters grew up in Allentown. She earned her high school diploma at Dieruff. Neither her mother nor her father had the financial resources or encouragement to attend college.

“My parents really encouraged me to go to college,” says Peters. “They understood that it would open up so many opportunities for me, and they wanted me to discover my passion and pursue the career of my choice.”

Peters’s grandmother paid for her first semester, and then the scholarship came to the rescue. “Without it, I wouldn’t be here,” Peters says.

“Being awarded scholarships means being able to get an education, and it lessens the stress associated with loans,” Peters adds.

Heading into her senior year, Peters, who interned with Concannon Miller as a junior, will seek out more hands-on opportunities. Her goal is to earn her CPA certification and eventually develop her career in tax services, a passion inspired by her work with VITA.  “I like numbers and making sure everything balances out,” she says. “In accounting, if something isn’t working, you can find an answer.” Like Peters’s Moravian College experience—the pieces added up and balanced out.  She found her answer.