Emigrating from a tiny village in Sicily, Santa and Vincenzo Corpora came to America in pursuit of a dream that their children would one day become the first to attend college. Those children—Santa, Pat, and Maria—chose Moravian. Today, they help make a Moravian College education possible for other first- and second-generation immigrants.

Pat Corpora ’78 embodies his parents’ values—literally. Tattooed on each forearm in 16-point script are the Italian words that Santa and Vincenzo Corpora would offer Pat and his sisters in the face of challenges ranging from junior high school bullies to college entrance exams. “Coraggio,” his father would say. “Courage.” “Pazienza,” his mother would add. “Patience.”

Those traits typified the Corpora parents, who emigrated from Castel di Lucio, a tiny village in Sicily, in the hope of a life less punishing than farming and the promise of higher education  for all three of their children. They grasped that dream. Pat and his sisters, Santa Zanchettin ’70 and Maria Corpora ’72, all credit Moravian as the place where they gained confidence, learned creative problem-solving, and found community. “Both my parents and Moravian gave us an immeasurable gift,” Pat says.

For 27 years, the Corpora siblings have been returning that gift in the form of a scholarship established in their parents’ honor; each year, the Santa and Vincenzo Corpora Scholarship Fund awards partial tuition for three students, all of them first- or second-generation European immigrants.

When the Corpora family arrived in Easton—Vincenzo had come a year earlier, begun work at a dye factory, and furnished a small house on the south side—none of the children knew a word of English. The younger Santa, 13 at the time, had completed the primary school in their village, which went only to fifth grade. But she was thirsty for more: Latin and French and biology.  “I always wanted to be a teacher,” she says. “In my town, the people who were educated were the priest, the doctor, the teacher, and the pharmacist.” To pursue that ambition, she needed to travel 20 miles from home, a three-hour journey on horseback with her father, and board with a family in the town of Mistretta. “The separation from my parents—from my brother, my sister, my friends—was really painful,” she recalls. “But I was determined to go on with my education.”

The Corpora siblings recall their mother as a fluent writer and animated storyteller who shared fairy tales and legends with her children. She was also a gifted seamstress who could look at a dress in a magazine, then draft a pattern to make one just like it. But as a girl growing in up 1920s Sicily, formal education past the fifth grade was out of the question. When the family— encouraged by aunts and uncles already in the United States—began to consider emigrating, the elder Santa Corpora had one goal in mind, Maria says. “She said to my father, ‘I will come to America if you promise to send all three of them to school, to the university.’” 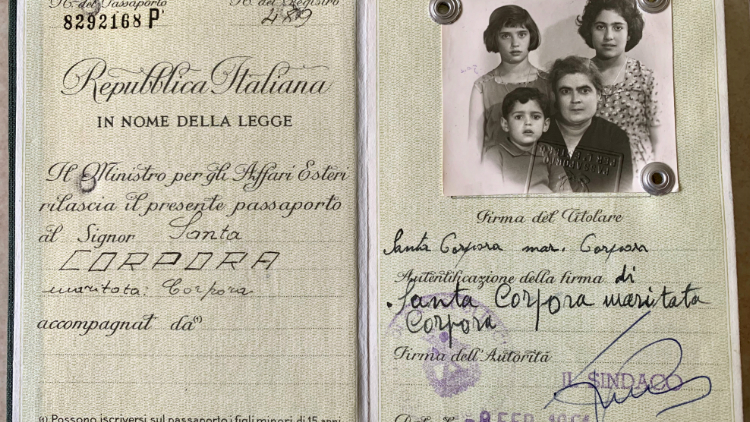 Maria was nearly 12 when they arrived in August 1961, and Pat was just 5. Santa remembers being puzzled by signs she read as “salt” in front of some houses; a cousin explained what “sale” meant in English. Though the siblings recall occasional slights—junior high school girls who snickered at Maria’s accent; a boy who once used a slur for Italians—they generally felt embraced by teachers and classmates, along with the relatives and Sicilian compatriots who had woven a close-knit community in Easton.

Their mother found work in a dress factory; the church and elementary school were walking distance from their house. Vincenzo planted a garden so the family could have fresh beans, lettuce, and tomatoes. Santa made bread, Easter cookies, cannelloni, and meatballs. A local store sold olives and Italian pasta. “I could walk down the street and meet people born in the same town that I was,” Maria says. “They would be on the porch; I’d stop; we’d talk in Sicilian.”

Pat absorbed English quickly and became a versatile athlete: baseball, basketball, football. Santa and Maria soon caught up with their classmates and excelled in public school. Homework was a legitimate reason for skipping chores. “My mother would say, ‘Go upstairs and study. I’ll do the dishes,’” Maria remembers.

When Santa began researching colleges—a guidance counselor had suggested Kutztown or Moravian—her father’s brother tried to talk her parents out of the plan. “He came over one day and said, ‘She’s going to get married. She’s not going to do anything with her education.’”

Santa’s parents remained steadfast. And when she visited Moravian, she was hooked. “I just loved it—the history, the kindness of the Moravians. I wanted to study languages.” A full scholarship allowed her to live on campus; later, professors encouraged her to deepen her study of French by spending her junior year in Paris. “It was an experience that changed my life,” Santa recalls—not only her classes at the Sorbonne and weekly visits to the Louvre, which was free on Sundays, but the experience of living with a family whose members could trace their lineage back to the French aristocracy. “They were so educated and so worldly. I saw a different side of life,” she says.

Maria followed her sister’s path to Moravian, with a dream of teaching French at the college level. “I went to my interview at the foreign language department and I felt this sense that if you come here, we’re going to help you succeed.”

Their parents had been strict about dates and parties, so living away from home also meant a loosening of social boundaries. “I loved being in a dorm, in a room by myself,” Maria says.  “I could have my books, my music. I loved sitting outside on a warm day and watching my classmates; some would be kicking a soccer ball, or we’d be there talking.”

“It was Moravian that gave me the confidence that I could achieve anything a native-born American could.”

Maria majored in French and Spanish, but she also ventured  into history, literature, and political science courses. “I learned  to organize my thoughts and marshal my arguments in those classes,” she says. “It was Moravian that gave me the confidence that I could achieve anything a native-born American could.” Including, after three years of doctoral work in French, a decision to attend law school. She graduated from Temple University in 1980 and practiced banking and real estate law; though retired, she continues to do pro bono work, representing clients in mortgage foreclosures and other real estate transactions.

When it was Pat’s turn to graduate from high school, Moravian struck his parents as the obvious choice. “They saw what Moravian had done for my sisters, and that’s where they wanted me.” He wasn’t certain of his future career path, but an accounting course with a rigorous professor helped him find his passion.

“Moravian taught me to be independent. To solve problems on my own. To think, to challenge, and to question,” says Pat, who served as president of Rodale Books, senior executive at America Online, and CEO of HCI Direct before forming a consulting business that specializes in direct-to-consumer marketing. “Moravian gave me the comfort and confidence that I could solve problems in the workplace the same way I did in the classroom.”

It was Maria who suggested the scholarship—a way to “pay forward” the gifts of their Moravian educations and to honor their parents. They started the fund with $25,000 and have grown it to $585,000 over the years; the siblings hope the earnings will eventually be sufficient to provide four students a year with full scholarships. “When we told our parents that we were going  to have the scholarship, the first thing they said was, ‘How can we help you?’” Santa remembers. “I think they were pleased that we had come to value education as much as they did,” Pat says. “I think they were certainly humbled, and a little embarrassed. But I think they were very proud of us.”

Coraggio. Pazienza. And generosità. The siblings agree that selflessness and sacrifice were also key themes of their parents’ lives. When Vincenzo grew roses in their Easton yard, his wife would bring them to the church to decorate the altar. When their grandchildren were born, they gave each one $5,000 to start a college fund. “Everything they did, they did for us,” Santa says. Maria agrees. “One of the things I think we learned from our parents was that if you are in a position to do good, then you have an obligation to do it.” 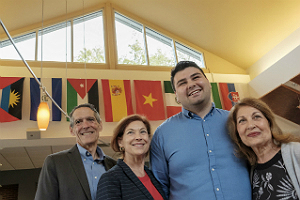 Avtandil Giorgadze ’19 grew up in the country of Georgia. As it became more difficult for his father to support the family, they emigrated to the United States. Giorgadze transferred to Moravian College from Tbilisi State University and is a recipient of the Santa and Vincenzo Corpora Scholarship. He graduated this past May with a major in physics and minor in mathematics.

Here, he shares his experience coming to America and Moravian College.