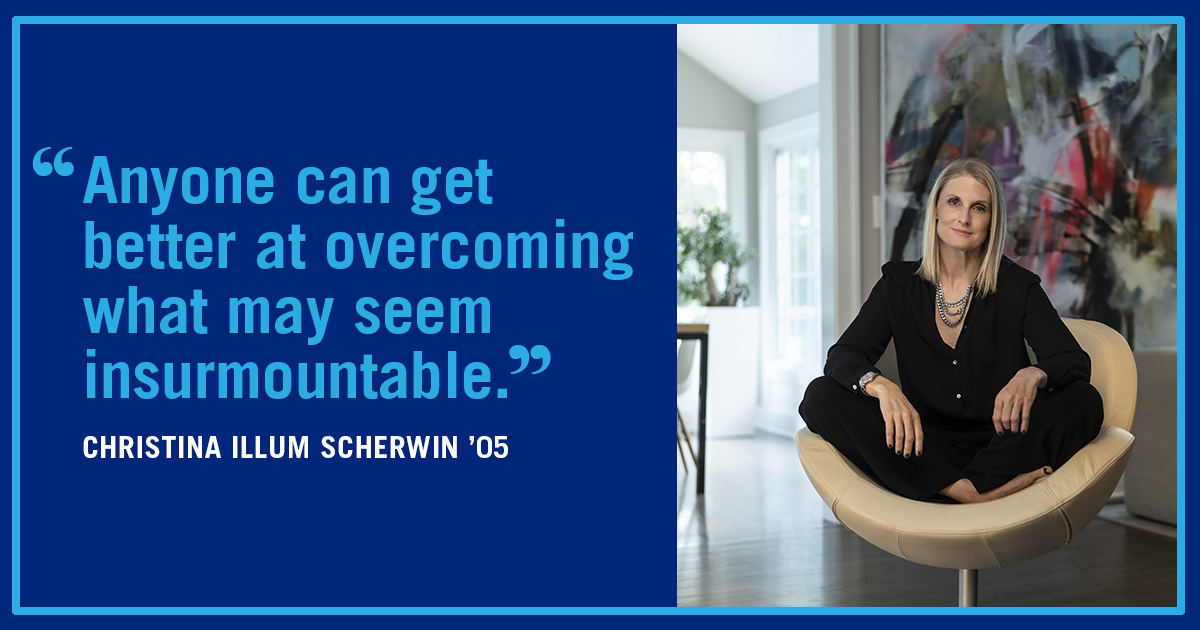 Christina Illum Scherwin '05 works remotely from her home in Connecticut.

Doug Pollard thought it was a prank.

The venerable track & field coach, who led Moravian College’s men’s and women’s teams from 1984 until his death in 2007, had received an inquiry from a prospective student-athlete. The writer, Christina Illum, expressed interest in attending Moravian College and participating on the women’s team. In the online form, she listed her personal best in the javelin throw at 193 feet 9 inches.

A joke, Pollard thought; must be triple-jumper Kevin Bush yanking his chain, because that throw was longer than the American Division III record. But it wasn’t a joke. To this date, Illum (now Christina Scherwin) has the second-longest throw in the United States behind Kara Pattersen.

“I remember that; it was a ridiculously far throw, so Doug thought it was a hoax,” says Mark Will-Weber, who coached the distance runners for Pollard at the time. Fortunately, the head coach responded politely to the e-mail, because it was true. Scherwin became one of Moravian College’s most skilled track & field standouts, a record-setting javelin thrower (2015 Moravian College Hall of Fame inductee) who went on to compete for her native Denmark in the 2004 (Athens) and 2008 (Beijing) Olympic Games. “Christina was an incredible athlete,” says Will-Weber. “Everyone was in awe, and we had some All Americans on that team.”

Today, Scherwin is excelling in another realm—business—as a consulting manager at Strategy Leaders Inc., a firm based in Norwalk, Connecticut, that advises small- to medium-sized privately owned companies. The firm covers the five pillars of business: sales, marketing, finance, operations, and human resources. Scherwin says she draws on the lessons she learned as an elite athlete every day as she provides executive coaching to entrepreneurs, a service that has grown in the past year with the unique challenges the pandemic has imposed upon small business owners.

“Anyone can get better at overcoming what may seem insurmountable,” says Scherwin. “Sports teach us to recognize our weaknesses and work on them, stay focused in the face of distractions, and solve problems. In business as in sports, you can’t play to not lose; you have to play to win, otherwise the business will stagnate and eventually get eaten up by its competitors.” 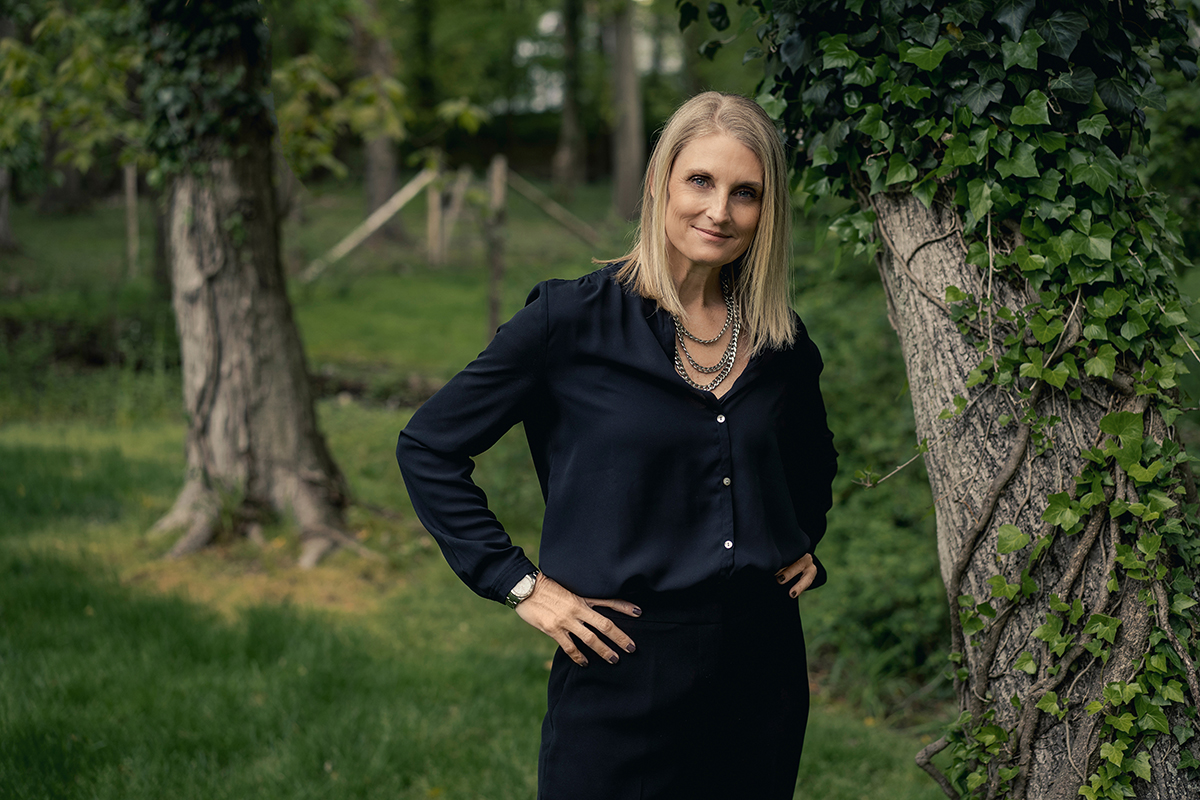 Scherwin enjoys the lush surroundings outside her home in Connecticut.

Scherwin was living in Philadelphia when she began looking at colleges within commuting distance. Too old to compete in Division I, she focused on Division III schools and found Moravian and Coach Pollard. “He had a warm presence,” says Scherwin. “He was the best ever; he gave me the opportunity to grow.”

Pollard supported Scherwin’s desire to compete in the high jump and long jump in addition to shot put, discus, and javelin, which require a different skill set. The variety likely made her a better competitor in the javelin. At the Middle Atlantic Conference indoor meet in 2003, Sherwin finished as the runner-up in the high jump and third in the long jump. But her exceptional talent was in the throwing events, shot put, discus, and of course javelin.

When she was a kid, she could fling a rock out into the middle of a lake, so she had an inkling she had a strong arm. As a teen, she competed on club teams in the heptathlon and qualified for the world juniors in javelin. Scherwin always had her eye on competing in the United States.

“The Scandinavian concept of Janteloven, or the Law of Jante, places the accomplishments and well-being of society ahead of those of the individual,” she says. It’s an unspoken social norm that can be inhibiting for an athlete, especially for one as competitive as Scherwin. “I am driven to compete; I love the thrill of a good throw,” she says.

“Christina worked incredibly hard in practice,” says Will-Weber. “And her work ethic did not go unnoticed by the rest of the team. It kind of elevated everyone, including the coaches.”

At Moravian, Scherwin won the NCAA Division III title in javelin in 2002 and 2003. Her throw in 2003—55.34 meters (181-7)—broke the Division III record and still stands. She missed the 2004 championships while training for the Olympics in Greece. She was also a two-time winner of the College Women’s Javelin Throw at the prestigious Penn Relays. After graduating magna cum laude with a degree in economics from Moravian in 2005, Scherwin began training for the World Athletics Championships in Helsinki, coached by her husband, Mark Fletcher, who threw javelin at Colgate University and competed in the 1998 Goodwill Games. Scherwin placed fourth in Helsinki with a throw of 63.43 meters. Her personal best, 64.83 meters, which earned her third place at the IAAF World Athletics Final in Stuttgart, Germany, in 2006, still stands as the national record for women’s javelin in Denmark and the second longest throw in the United States.

“Sports teach us to recognize our weaknesses and work on them, stay focused
in the face of distractions, and solve problems”. —Christina Illum Scherwin ’05 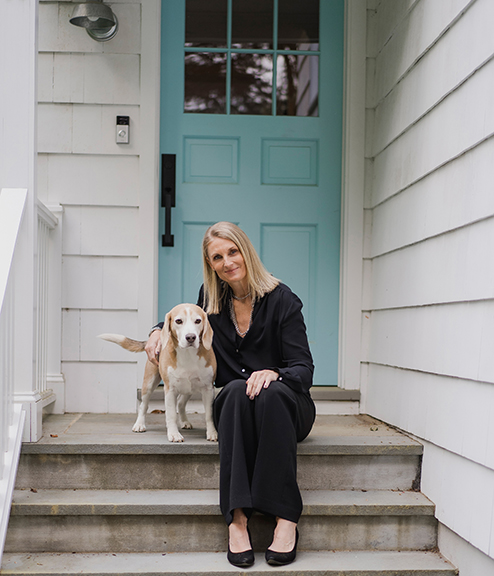 Scherwin and her dog George are great friends.

The Pain in High Performance

Throwing the javelin is a highly technical feat, a precisely choreographed dance down a 33.5-meter runway. Throwing well at an elite level is brutal on the body. The first steps of your approach run build speed and rhythm; then you cross over, essentially running sideways with your left hip (if you’re right-handed) facing your target and gaining more speed. Leaning back with your right arm extending the implement behind, you suddenly stop your body’s forward motion with a final foot strike—known as the block—where your left leg braces and your hip transfers kinetic energy from your lower body to your upper body and into the javelin. Competitors say hitting the block right is akin to riding your bicycle into  a curb and flying over the handlebars. It’s been estimated that upwards of 2,000 pounds of force is exerted on the block leg at that point. Then the right side of the hip rotates as the arm comes forward in a whipping action and releases the implement at roughly 30 meters per second.

In practice, a javelin thrower might release 12 to 25 throws into the grass—that is, after completing 100 to 200 medicine ball throws and other strength-building exercises. In a season, an athlete of Scherwin’s caliber might launch thousands of throws, so shoulder and knee injuries are common. Pushing yourself beyond physical barriers is a constant.

“Those who can push their mental and physical limitations the most, knowing where the limit is for not getting hurt, will achieve the most success,” says Scherwin. “You need to know the difference between pain—the pain you can live with and that will make you grow—and what I call pain-pain, which signals that you need to rest and recover or you may suffer an injury. It’s a fine line, but you need to have a very good understanding of where that line is. To excel as an athlete, you must constantly train within a few percentage points of that line.

In preparing for the 2008 Beijing games at age 32, Scherwin tore her rotator cuff and needed surgery to repair her shoulder. She qualified for the games and worked hard to rehabilitate, but there was not enough time. “It was not the right time for me to perform my best,” she says. Still, she couldn’t pass up her second Olympic opportunity. “It’s an experience like no other,” she says. “The whole world comes together. There’s no talk of race or religion. You respect your competitors for their ability. You are all one.”

After the 2008 games, Scherwin returned to Eugene, Oregon, where Fletcher was in practice as an orthopedic surgeon (the couple have two children, Emilia and Luka). She began coaching javelin throwers for the University of Oregon Ducks, including one particularly talented athlete, Cyrus Hostetler, who would compete at the 2012 and 2016 Summer Olympics under Scherwin’s tutelage.

Unlike a lot of American coaches who look at video frame by frame before offering advice, Hostetler says, Scherwin could do it in real time. “She could instantly tell me how to improve,” he says. “Her level of detail was mind-boggling.”

Hostetler now directs marketing videos for a high-tech company in San Diego. The two remain close even now that Scherwin is living in Connecticut and no longer playing around with sharp implements that look like spears. Her new game is tennis. “I need something to always stay competitive,” she says. “I love tennis; it’s like a chess match.”

Scherwin’s other passion is encouraging kids’ involvement in sports as a board member of the YMCA in Westport, Connecticut. “It really concerns me that one in three girls stop participating in sports during puberty,” she says. “I know how much kids can learn from their struggles in sport. It teaches them not to be scared of mistakes. Making mistakes is how you grow.”

Jeff Csatari is executive editor of Galvanized Brands (the media company founded by David Zinczenko ’91) and an adjunct professor of journalism. 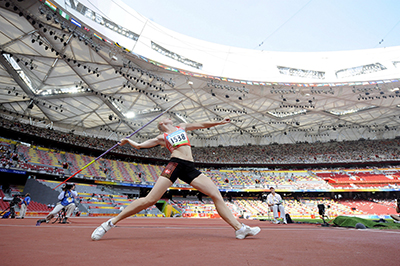 Watch a video of the 63.43-meter javelin throw that earned Christina Scherwin fourth place
at the 2005 World Championships in Helsinki and a national record in her native Denmark: mrvn.co/scherwin

Reach Your Goals the SMART Way

At Moravian, Christina Scherwin ’05 (then Christina Illum) won the NCAA Division III javelin championship with a collegiate-record throw. She competed in two Olympiads and had her best result at the 2005 World Championships, finishing fourth. After her athletic career, Scherwin coached Olympians and national champions at the University of Oregon. To stay focused on achieving athletic excellence, Scherwin uses and coaches SMART goals.

SMART Goals Applied to Business
Scherwin is a consulting manager at Strategy Leaders in Norwalk, Connecticut, where she helps clients achieve their goals. Here she shows how to use SMART goals toward a business objective.

“When working with clients, I often find that their goals are not measurable,” says Scherwin.

“Without specifics to measure and hold people accountable, chances of success diminish greatly. Use SMART goals when writing business plans, job descriptions, and next steps and to communicate with staff. Use metrics and progress reports to increase clarity and keep employees inspired, focused, and motivated.

“Often new clients tell me their goal is to ‘grow sales.’ But what is their specific aim? If they grow sales by just $1, technically they’ve reached their goal, right? But I doubt that’s what they hope to accomplish.” Let’s apply the SMART goal approach:

Measurable
Track monthly sales revenue and measure progress in outstanding proposals and new clients added, while maintaining the current client base.
Track close ratio percentage to use in forecasting and sales activity planning.

Attainable
Use the current network of clients for referrals.
Use lead lists in a proprietary database.
Launch a social media marketing campaign.