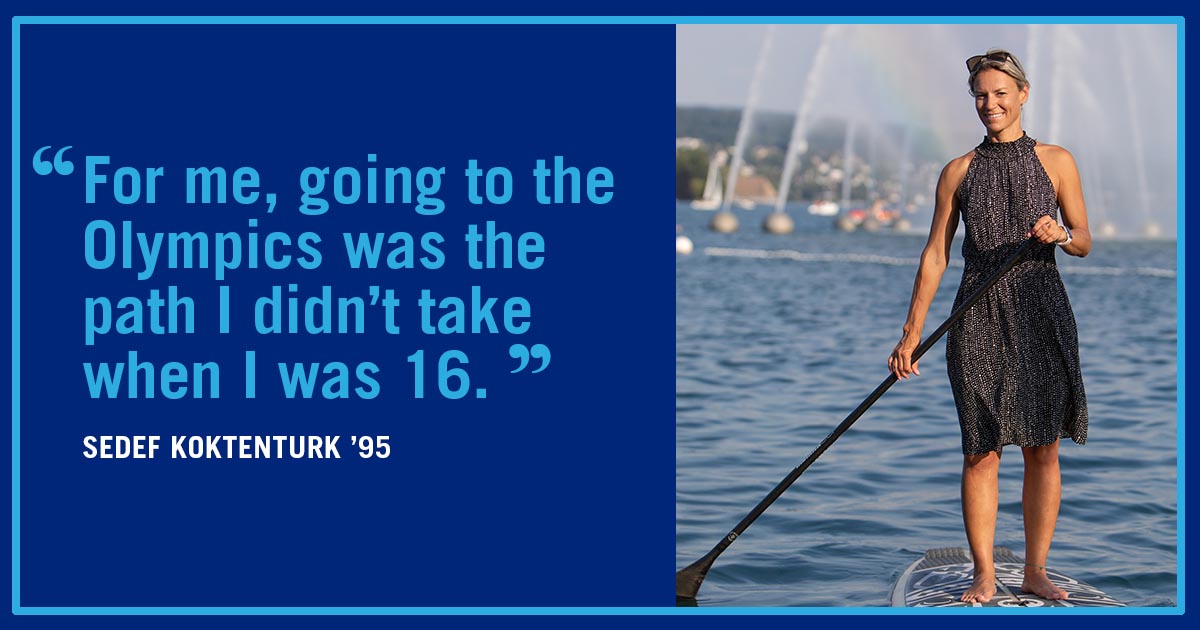 The Direction of Her Sail

By Anndee Hochman
Photographs by Angela Straub, AS Photography

Sedef Koktenturk was 8 years old—a barefoot girl in a kid-sized wetsuit— when she took a summertime windsurfing class in Bodrum, Turkey, where her family lived. The Aegean rippled bluish green; Mediterranean winds swelled her sail. Koktenturk was hooked.

“I got the bug,” she says. “I pretty much grew up with windsurfing. I liked being on the water, and the competitiveness: You’re competing against others but also against yourself and a little bit against nature.”

By the time Koktenturk was a teen, she was windsurfing every day that she wasn’t in school: gaining strength and endurance, learning to read the currents and the winds, learning the tactics to steer her board and win.

Local windsurfers and officials from Turkey’s national Ministry of Youth and Sports encouraged her, and when windsurfing became an Olympic sport, Koktenturk, then 16, fantasized about competing in the 1992 summer games.

A whip of wind dashed that dream. The day before a national race, Koktenturk was windsurfing when an unexpected gust toppled her. She broke her wrist, and the injury sidelined her for the rest of the season. It also provoked a moment of reckoning.

“I was quite heartbroken that I broke my wrist,” she says. “But it made me realize that I was also missing out on a lot of other things by only windsurfing.” So she shifted course, leaning into her American school’s rigorous academic program, her participation in track and field, her friends. “I focused on just being a teenager,” she says.

That included applying to a number of colleges in the United States—her dream was a small liberal arts school with Division III athletics—and landing an international scholarship at Moravian.

Could she hope to be one of the 28 women, from countries across the globe, to qualify for the 2008 games?

From Moravian to Goldman Sachs

Koktenturk applied the same steady focus that had brought her success on the water to her academic pursuits. She majored in economics; a class in graphic design led to a passion for ceramics and a minor in fine art. She competed in track & field: the long jump and the triple jump. With the ski club, she headed to the Poconos for weekly outings. She let go of the Olympic dream.

But not entirely. Some of her former windsurfing buddies had taken up yachting, and Koktenturk began sailing with them on weekends in Long Island Sound—while at Moravian and afterward, when she moved to New York to work at Coopers & Lybrand (which became PricewaterhouseCoopers), then to pursue a master’s degree in business at Columbia University.

She got her MBA in 2004 and began to work at Goldman Sachs. The following year, she learned that the Olympic windsurfing equipment was changing, an alteration that opened the door to new athletes who weren’t wedded to the older-style rigs.

Koktenturk was fit, but did she have the endurance to train as an Olympic windsurfer? Could she compete against women who’d made windsurfing a career choice, who hadn’t taken a 16-year hiatus from the sport? Could she hope to be one of the 28 women, from countries across the globe, to qualify for the 2008 games?

There was just one way to find out. “I started toying with the idea, and everybody said, ‘Look, you’re in a place in your career when you can actually take the time off and do this. If you have any chance of going to the Olympics, you should do it.’”

In June 2006, Koktenturk went to her boss, a partner at Goldman Sachs who happened to be a fan of the Olympics, and she explained her plan: She would resign from the firm and devote the next two years to training as a windsurfer, traveling the world to work with elite coaches and compete in qualifying races. The boss’s response: Do it. 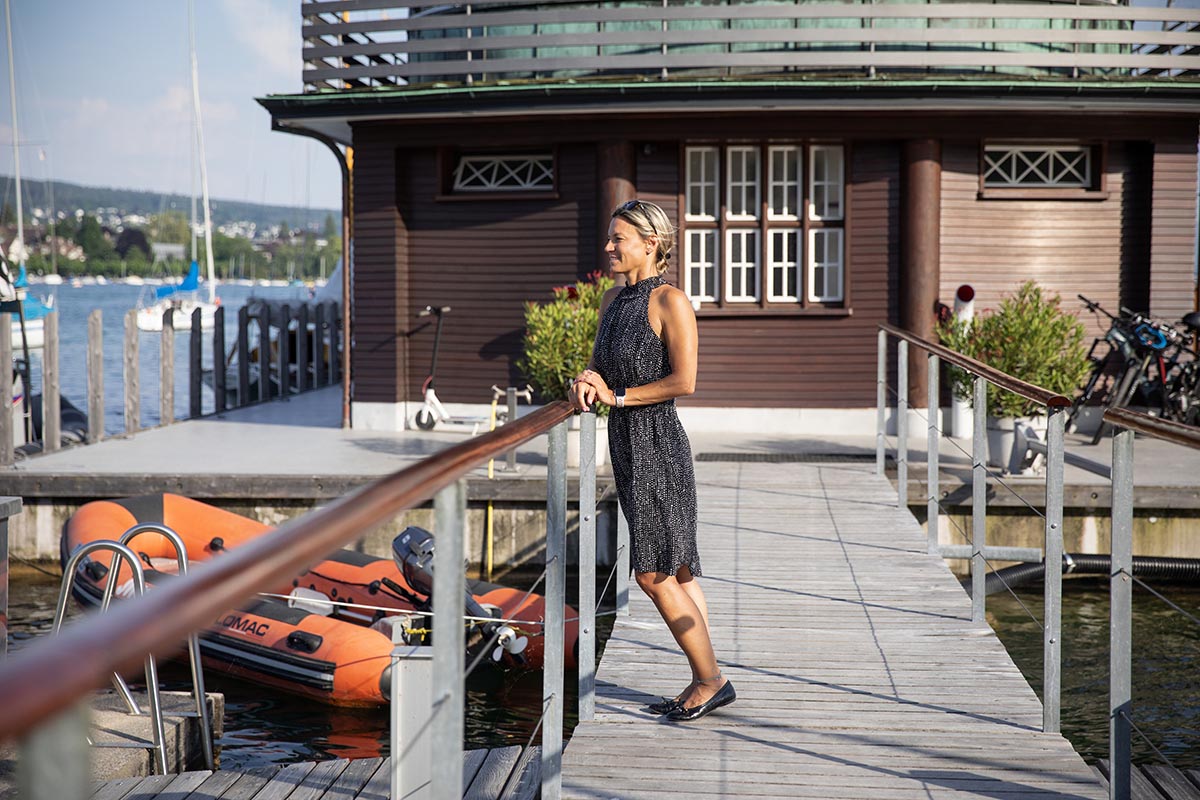 Koktenturk takes in the view from the yacht club on Lake Zurich.

Powering Toward the Olympics

Koktenturk spent the next two years in a grueling regimen, working with trainers, coaches, and nutritionists, spending four hours a day on the water and two more in the gym, with a 30-minute “recovery run” each evening.

There was high-intensity rowing, running, and cycling; weight training for strength; time on the sailboard to build stamina. During a windsurfing race, she had to be able to pump her sail— a whole-body exercise of generating power from her legs through her core to her arms—for 30 minutes at more than 80 percent of her maximum heart rate.

During the day, between workouts, Koktenturk gulped gels containing protein, vitamins, and minerals, along with amino acids dissolved in water. She had solid food only in the evening. “I started being very cautious of what I put in my body,” she says. “I got very smart about everything I could control.”

She globe-hopped, working with a Spanish coach in Turkey, racing off the coast of France in 40-degree weather, training with other elite windsurfers in Canada. “It’s quite a lonely journey,” she says. “I missed friends and family. I missed weddings, birthdays, friends having kids. You’re kind of living in a bubble.”

In her first world championship race, in 2007 in Portugal, she came close to qualifying for the Olympics. But in the next qualifying race, the following year in New Zealand, she tanked. “I couldn’t acclimate to the climate in New Zealand,” she says. “I did quite badly. It looked like maybe I wasn’t going to qualify.”

Then, eight weeks before the games were to start in Beijing, Koktenturk got the call: someone had dropped out, and there was a place for her among the Olympic windsurfers. She would be the sole woman representing Turkey in sailing disciplines. 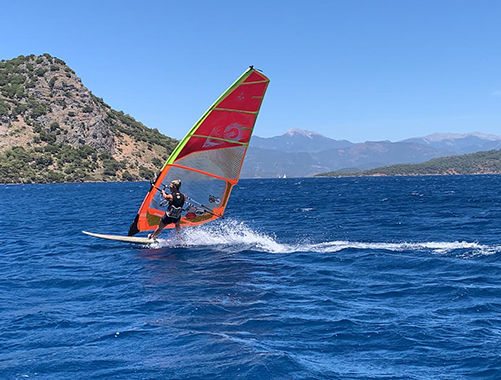 Back home in Turkey, Koktenturk windsurfs on the Mediterranean Sea
using the latest equipment. She plans to compete in masters-level races.
Photograph courtesy of Sedef Koktenturk

In China, she and the other 400 competitors in sailing events stayed in Qingdao, a “fisherman’s village” with a five-star hotel and a marina. They flew to Beijing for the Olympics opening ceremony.

“It’s such a high,” Koktenturk recalls: entering a stadium packed with cheering spectators, among 10,000 of the world’s most extraordinary athletes—some from countries she’d never even heard of—her Blackberry buzzing with texts from friends and colleagues across the globe.

“The stadium was electrifying,” she says. “We didn’t get back to our village until three in the morning. I was lucky my event didn’t start for another couple of days.” On some race days, the current was fierce and the wind mild; on others, the air churned and the water swirled with seaweed as she navigated her board around a half-dozen buoys, trying to keep her eye on the wind, the current, and her competitors.

“The racing was challenging,” she says. “It’s a very difficult place to sail. I finished at the end—27 out of 28.”

And then she had another decision to make: Would she train for another four years, aiming for a medal in the 2012 games? Or would she return to her former life: the work she loved, her family, her friends?

Koktenturk thought about the calculus that guides her work in finance: every opportunity has a cost. “When I set the Olympics as a goal, I gave up on advancing my career for a number of years,” she says. “There was a huge cost but a huge benefit as well.”

She hadn’t earned a medal. But she’d gleaned something more enduring: an awareness that setbacks—whether a broken wrist or a national recession—are not deal breakers. A keen appreciation for the life she’d picked. “For me, going to the Olympics was the path I didn’t take when I was 16. You don’t get many opportunities to go back and take the path you didn’t take, and then feel grateful for the path you have.”

So she came back—initially to work at Goldman Sachs in London, then at Generation Investment Management, a company cofounded by former vice president Al Gore. Next, she joined Genesis Investment Management as part of a team managing investments—pension plans, foundations, and endowments—in 32 emerging countries.

Koktenturk found she needed to rebuild her mental stamina in the same way she’d trained her body for the rigors of competitive windsurfing. When she was first back at work, she grew foggy-headed at 3 p.m. “Now I can work 20 hours if I have to. The brain is a muscle; the more you do, the more active you stay, the better you get at something.”

This past pandemic year brought change to every aspect of Koktenturk’s life. After spending four months locked down in London, she decided to relocate back to Turkey. “It dawned on me that I didn’t want to be away from my broader set of friends and family.”

Though she hadn’t lived in the country for more than 28 years, Istanbul immediately felt like home: her first language, a familiar sense of humor, and a more casual style of socializing (even at a masked, safe distance). “In Turkey, people don’t make plans days in advance to see each other,” she says. “You call someone, and you just go and show up.”

The COVID-19 pandemic, which laid bare so many inequities, also prompted a career reboot. “It made me realize what my true north is, and that I want my career to be focused on what has impact in the world.”

She is now a managing partner and COO for Blue Horizon Corporation, which invests in companies that make alternative proteins; today, those proteins come primarily from plants, though the sector is moving toward products formed from fermentation and animal cells.

The focus is on “planetary health and human health,” Koktenturk says; her role is to ensure that the companies seeking funds are ideologically aligned and committed to a more sustainable food system. Though Blue Horizon is based in Zurich, Koktenturk can work remotely from Istanbul. “I never thought I could move my personal life to Turkey and still advance my career globally,” she says. “I’m working a lot harder but a lot more efficiently.”

Moving back to Turkey, closer to the sea, also meant more opportunities to windsurf. Koktenturk revived her skills and is experimenting with the new windsurfing equipment, called an IQ-Foil, that all athletes will use in the 2024 Olympic games— a wing that lifts the board nearly a meter above the water. “It’s faster, less dependent on wind,” she says. “You barely hear the water, because you’re flying above it.”

Koktenturk is working to reactivate her status as a registered athlete so she can compete in masters-level races. But she won’t train for the next Olympics. She’s grateful that, in the real world, achievement is marked with more nuance than a trio of bronze, silver, and gold medallions.

“To be honest, after the Olympics, I tried to set the goal of not setting goals. I’ve learned, even if I can’t see the silver lining at the moment, to believe that there is one. And to enjoy the day-to-day journey.”

Anndee Hochman is a journalist, essayist, and storyteller. Her column, The Parent Trip, appears weekly in the Philadelphia Inquirer, and her work has also been published in Poets & Writers, Broad Street Review, Purple Clover, and other print and online venues. She is the author of Anatomies: A Novella and Stories as well as an essay collection, Everyday Acts & Small Subversions: Women Reinventing Family, Community and Home.