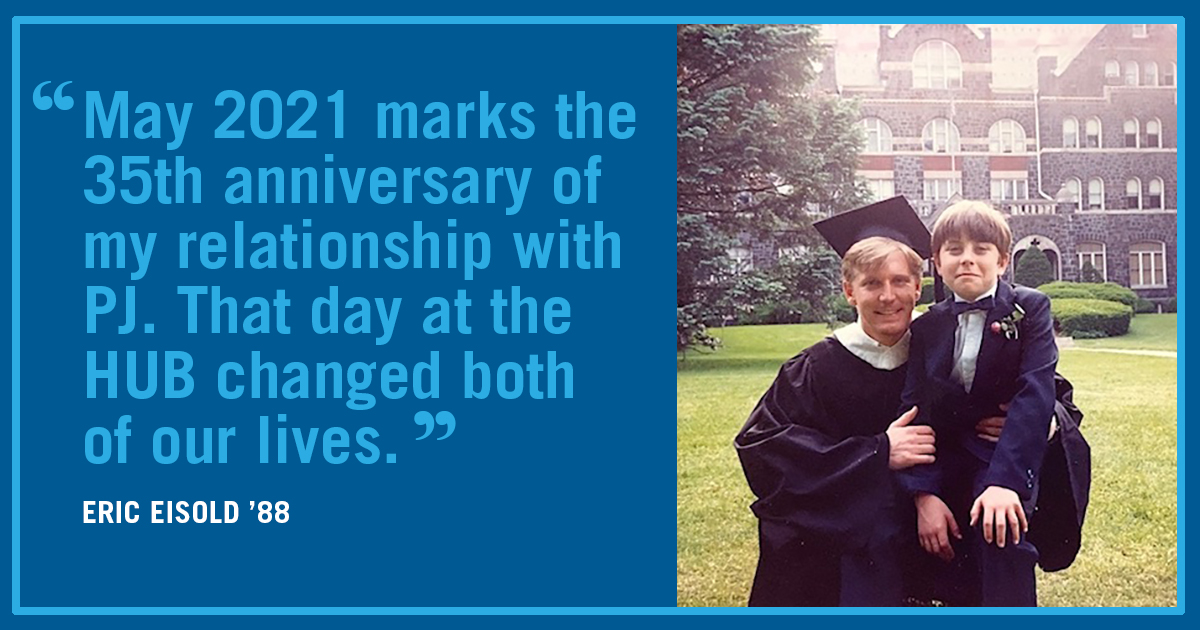 Your Story
An alum reflects

During my spring 1986 semester at Moravian, my roommate surprised me with a last-minute request: Would I go with him to a Big Brother event at the HUB? I nonchalantly agreed and gave it very little thought until that evening. Listening to other Moravian Big Brothers speak inspired me. I remember walking out after the program thinking that this was an amazing organization. I quickly signed up, eager to give back to our Bethlehem community. Little did I know that the Big Brothers organization would be the one giving back to me. 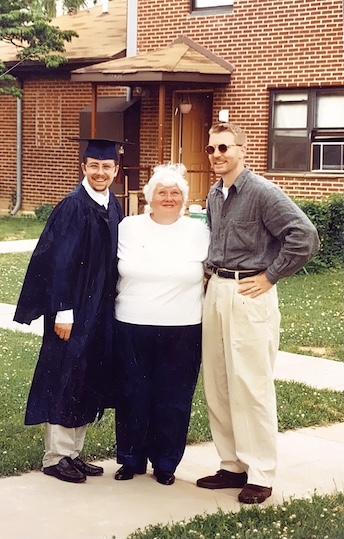 PJ after his college graduation, with his mother,
Sarah, and Eric Eisold ’88.

In May 1986, I signed a contract agreeing to mentor a young boy for one full year. Soon after, I met PJ, an 8-year-old boy whose selfless mother enrolled him in the Big Brothers program to offer him opportunities that she personally was unable to give him. Although the written agreement had a start date and an end date, the story of my relationship with PJ continues 35 years later.

PJ and I spent our first few visits together having wings at Third Street Chicken and Ribs followed by a trip to The Cup for ice cream. By the time fall came around, PJ became a regular fan  at Moravian home soccer games and attended many events with my circle of friends as well as with my traditional family of five. PJ’s world was expanding, and so was mine.

PJ lived in Marvine Village in Bethlehem. I was raised in Doylestown. Our upbringings couldn’t have been more different, yet as we learned about each other, we realized we had more in common than we thought, beginning with our respective mothers, who were central to everything we did and believed. Sarah, PJ’s mom, saw the value in our relationship. She never minded when I came to pick up PJ to spend birthdays, holidays, and weekends with me, even though I know she missed him terribly when he was away from her. She embraced and appreciated the fact that PJ was experiencing things that she thought she was unable to give him. Of course, it was she who enrolled him in Big Brothers.

As time went by, Sarah and I built a relationship as well. She trusted me with her son and confided in me that she needed help with PJ’s schooling. Soon, I went to PJ’s parent/teacher conferences, encouraged him to read more and watch less TV, and helped him study for his weekly spelling tests. I had become somewhat of a father figure to PJ, but I knew if this nurturing were going to continue after I graduated, I would need help from my family. And they came through.

College ended, and my job took me to Philadelphia and New York. PJ would spend summers with my parents. He would go to work with my mom at an adult day care center and visit my brothers every chance he got. He was part of the family.

As PJ grew up, I pushed him out of his comfort zone to help him learn how to do things independently, just as my father did for me. PJ learned how to take a bus or train and drive a car. Of course, these were skills he would need in life, but the more important lesson was to do things he was afraid to do.

In April 1998, my first son, Moritz, was born. I was 30 years old and living in Milan, Italy. PJ was 20 and had just graduated from culinary school. We were both in transitional phases in our lives. I needed someone I could trust to help with childcare for my son, and he needed a plan. Despite being terrified to fly, PJ got his passport and boarded a plane to Italy. The world was expanding for both of us.

During his time abroad, PJ grew from a boy into a young man. Trips to Monaco, Austria, Germany, and Venice opened his eyes to different viewpoints. His relationship with Moritz was special from the day he stepped into our Italian flat. When it was time to baptize Moritz, my wife at the time and I knew that PJ would accept the honor of being his godfather.

After several months, PJ returned to the States to work in Pennsylvania, and soon thereafter I moved back to New York. Although we stayed in touch, we both became busy in our separate lives.

In March 2007, PJ’s mom passed away unexpectedly. PJ continued to work hard, now in the beauty industry, and time marched on. But Sarah’s death left a void that only family can fill.

In 2014, PJ and I again found ourselves at a crossroads. I was remarried and had my fourth child. My wife planned to return to work, and after countless interviews with potential caregivers, she had found no worthy candidates. We wondered how we could possibly find someone to care for our children like we did. PJ was contemplating the next move in his life.

One day, in conversation with PJ, he spoke about his relationship with Moritz and how important it was to him. He said he would like to relocate to New York and care for our children. Both of our dilemmas were solved. To this day, PJ resides with us in New York, surrounded by family.

In the moment when we meet people, we have no idea how they will affect us or how long they will remain in our lives. May 2021 marks the 35th anniversary of my relationship with PJ. That day at the HUB changed both of our lives. Maybe it is time that we celebrate the value of our long-term relationship. Or perhaps we should just continue celebrating the many special times along the way. As with all long-term relationships, both PJ and I learned as we grew together. That alone is reason to celebrate.

I have been fortunate enough to have wonderful role models in my life who believed in me, supported me, and pushed me to be my best. I hope that I have done the same for PJ. Moravian brought about my connection with Big Brothers, and for that I will be forever grateful.

Interested in volunteering for Big Brothers Big Sisters? Go to bbbs.org to learn more and find an agency that serves your area.