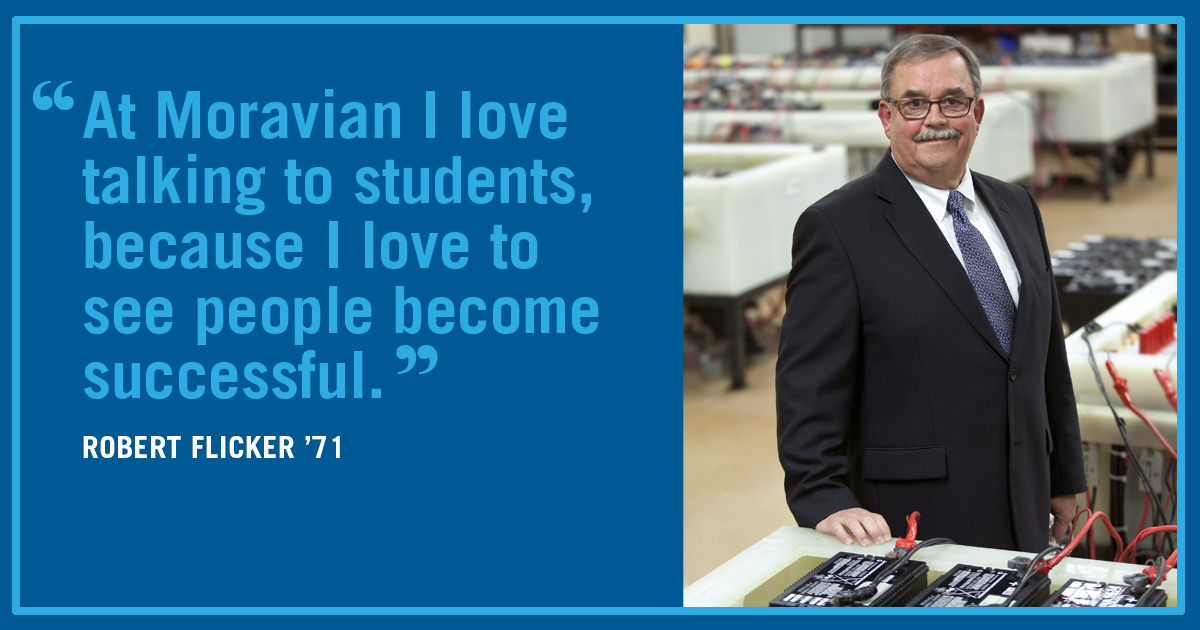 A battery is a self-contained package of potential energy. Its components convert chemicals into electricity. In an automobile, it’s the starting, lighting, ignition (SLI) battery that gets everything going. With it, you can get to your destination. Without it, a car appears drivable but sits still—a cold, motionless hunk of metal.

A student is like an SLI battery, full of potential energy. And Bob Flicker, chief operating officer at East Penn Manufacturing, the battery company headquartered in Lyons Station, Pennsylvania, knows you need to be charged up to get things started.

Growing up in rural Mertztown, Flicker loved math. His father had an excavating company; his mother was a homemaker. When he wasn’t in school, he drove the dump trucks and planned for college.

At Brandywine High School, he liked that everyone knew each other, and that influenced his choice of Moravian. “I applied to other liberal arts schools,” he says. “But I liked Moravian best. I felt comfortable there. It was a friendly campus and Bethlehem a friendly community. I wanted a smaller school where I could have more contact with people.”

His goal was an engineering degree. Back then, Moravian had a cooperative program with Lafayette. He planned to do three years at Moravian, then two at Lafayette. “I enjoyed physics and math, and at Moravian I got more excited about them. That’s in large part due to the professors: Dr. [Ed] Roeder, freshman physics; Dr. [Jack] Ridge, department chair; and Joe Powlette, a physics professor who was my honors paper advisor. They encouraged me.” So rather than transferring, Flicker stayed.

But it wasn’t easy. The first in his family to go to college, he was unsure of himself. He didn’t know if he could compete. “I remember my first semester sophomore year. I was in the lab, and Mr. Powlette gave me a pep talk. ‘You know, Bob, you have talent. You could do a lot better if you worked at it.’ It made such a difference, hearing someone have that confidence in me. It turned on a light.”

This support from the faculty fostered a deep love for the college. “I still see that today—the faculty and students working together,” Flicker says. “It hasn’t changed.”

“My favorite days at work are when I am in the plant talking to employees.
And at Moravian I love talking to students for the same reason. Because I love to see people become successful.”

At graduation, he was in the Army Reserves and planning to go to graduate school. By this time Flicker had married, and he and his wife, Deborah, were living in Topton. He needed money for tuition and took what he thought would be a temporary job as a punch press operator at nearby East Penn Manufacturing. After a couple of months, the company asked him to stay and offered to pay for school. Flicker earned his master’s degree in physics from Lehigh University in 1974. He has been at East Penn developing products and overseeing its development into a global presence for 48 years.

East Penn Manufacturing was founded in 1946 by DeLight Breidegam Jr., a member of the Moravian College Board of Trustees for 37 years and a benefactor of the college. It is the world’s largest single-site lead battery company, making more than 500 types, from small lawnmower batteries to huge backup systems for hospitals, credit card companies, and wind and solar energy storage. Every day the company produces 160,000 vehicle batteries alone under the Deka brand as well as private labels.

Flicker has been promoted seven times, from engineering technician to senior management. “He’s a very humble guy and an icon in the industry,” says Dan Langdon, former president of East Penn Manufacturing. “When it comes to engineering and design in the battery world, he’s the man.”

Langdon offers as an example the time Harley Davidson was having problems with motorcycle batteries that leaked, corroding the chrome on the bike. Bob and his team developed a spill-proof battery. Its use expanded to more motorcycle brands, ATVs, motorized watercraft, and ultimately cars—as a stop/start backup battery.

Flicker has enjoyed his job so much that “work is almost a hobby,” he says. But life wasn’t without challenges. In 1996, 39 inches of snow collapsed the roof of the East Penn distribution center, rupturing a gas line and causing a massive fire. Flicker and Langdon scrambled to set up an alternative fulfillment facility, keep orders going out the door, and make payroll.

The annus horribilis was 2014. Sally Breidegam Miksiewicz ’84, CEO and daughter of the founder, was killed in an accident, leaving in anguish a company whose employees consider themselves family. Just days later, Flicker’s wife, Deborah, passed away from pancreatic cancer. He has honored her 30-year career as a nurse by funding the Flicker Virtual Cadaver Lab in the Sally Breidegam Miksiewicz Center for Health Sciences at Moravian.

Flicker is grateful to the educators who ignited the spark that allowed him to discover his capacity for learning, and he takes pleasure in giving back. Since 2013, he’s been a member of Moravian’s board of trustees, serving on the Executive and Audit Committees and chairing the Student Affairs Committee. He is a fan of scholarships, particularly the Jack R. Ridge Science Scholarship. “I get satisfaction in knowing that the scholarships help attract good talent, especially if it’s a first-generation student.”

He wants everyone to be as charged about their pursuits as he is. “My favorite days at work are when I am in the plant talking to employees,” he says. “And at Moravian I love talking to students for the same reason. Because I love to see people become successful.”

Therese Ciesinski is a freelance writer and former editor at Organic Gardening magazine.