“A teacher affects eternity; he can never tell where his [or her] influence stops.”

Professor of Psychology Dana Dunn hits it out of the ballpark with this comprehensive, cutting-edge 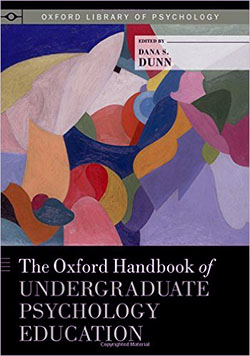 content recommendations, teaching methods, and classroom management strategies, as well as advice on administrative and professional issues, such as managing one’s career, chairing the department, organizing the curriculum, and conducting assessment.

“I wanted to create a resource for psychology educators, so they would have a current collection of all the topics important to psychology education,” says Dunn. “This book accomplishes that; it is the most comprehensive work out there.” Three years in the making and 952 pages long, the Handbook was a labor of love—one that psychology educators are sure to love as well. 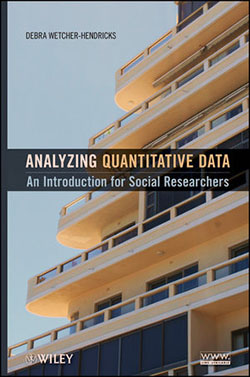 Wetcher-Hendricks, associate professor of sociology, has written an accessible, practical guide to the key quantitative processes and the use of software for analyzing data to draw valid conclusions from a research project. Her book guides readers step by step through the processes of organizing raw data, using descriptive statistics and tests of significance, drawing valid conclusions, and writing research reports. From the Wiley website: “Analyzing Quantitative Data is an excellent book for social sciences courses on data analysis and research methods at the upper-undergraduate and graduate levels. It also serves as a valuable reference for applied statisticians and practitioners working in the fields of education, medicine, business and public service who analyze, interpret, and evaluate data in their daily work.”

In these increasingly partisan times when the world seems ever more consumed with style over substance, there are very few places left where is it encouraged—mandatory, actually—to say what one really thinks? One event that inspires such exchanges is the annual Battle of Ideas, a two-day, multi-session festival in London in its tenth year where luminaries from around the world gather to do (intellectual) battle over some of the most pressing questions of our time along every theme imaginable from arts and culture to liberty and law to science and the environment and all with the added emphasis on freedom of speech and expression.

Held annually at the Barbican in the heart of London’s performing arts district, the Battle also consists of satellite events held throughout the world over a two-month period both before and after the main event. Everywhere, it is a lively affair featuring sessions of scholars, political figures, clergy, and lay-people arguing from various ends of the political spectrum, while the attending public, many of whom are school-age children and college students, chime in with their concerns and queries but always with Voltaire’s maxim regarding free expression underscoring every session. As Claire Fox, director of the Institute of Ideas on behalf of the Battle of Ideas Committee 2015 reminds, “The festival’s key ingredient is to ask difficult questions rather than provide easy answers, much less silence with an emphasis on risky opinions.” As she goes on the explain further, “Ideas that challenge orthodoxies inevitably discomfort, so,” she warns, “if you attend the Battle of Ideas, you will be offended!”

Speakers and attendees at the October 2015 event were treated to fiery discourse in such sessions as:

Joel Nathan Rosen, associate professor of sociology, was invited to participate in this past  October’s Battle, serving on a panel titled “Moneyball or Mourinho: Is sport seeing a big data revolution?” which was a staged debate over the value of data analysis vs the experience and personality of successful coaches, like Jose Mourinho, when it comes to the success of athletes and sports franchises. Rosen’s panel of speakers hashed out the big data questions before an enthusiastic audience ranging in age from their teens to their 80s. Like virtually all of the sessions, it was hotly contested but with a strong degree of respect and admiration coming from within the chiding and open disagreements. As Rosen explains:

“In a civil society people are supposed to disagree. At the Battle of Ideas, sacred cows are ground into hamburger.  And indeed, the weekend creates odd bedfellows. You might see a libertarian and a humanist fighting fiercely over a point during the day and then sharing a beer at the pub in the evening, which is really how it’s supposed to be!”

And at the close of the weekend, the hoped-for aftermath of the Battle of Ideas is that speakers and audience return to their families, friends, and coworkers and carry the conversations with them, opening up debates with a willingness to battle over important ideas in their own communities. But for participants and audiences alike, it’s an opportunity to engage with extraordinary ideas in a super-charged environment.

Rosen’s session was audio-recorded. You can listen to it at the following link: http://www.battleofideas.org.uk/2015/session_detail/10054

Links to other sessions from this and previous years can be found on:

Dana S. Dunn, professor of psychology, was named the Director for the Society for the Teaching of Psychology’s (STP) Programming at International Psychology Conferences. His goal will be to foster programming that addresses the teaching of psychology at international conferences. In order to offer teaching-related programming, Dunn will identify, coordinate, and nurture international liaisons for each identified conference. He will serve in this position for three years, until the end of 2018. STP put out a call for interested candidates; Dunn applied and was subsequently appointed to the post in late fall 2015. “I am excited about this opportunity, which includes travel to one international conference each year,” says Dunn who is considering attending a conference in Japan in 2016. Dunn served as the President of STP in 2010.

Inspired by a performance of the Jitro Children’s Choir of Czechoslovakia on tour in the United States in the early 90s, Joy Hirokawa, assistant professor of music, founded and began directing her own ensemble, the Bel Canto Children’s Chorus based in Red Hill, Pennsylvania.

This year, the group is moving to the Lehigh Valley and, thanks to Hirokawa’s initiative and Bach Choir Director Bridget George’s enthusiasm for Bel Canto, which has performed with the Bach Choir in the past, the two musical groups have formed an alliance. The children’s chorus has been renamed the Bel Canto Children’s Chorus of the Bach Choir of Bethlehem. (To learn more about Bel Canto and the affiliation, you’ll find a complete story in The Morning Call’s January 10 edition, http://www.mcall.com/entertainment/music/mc-bach-choir-bethlehem-bel-canto-chorus-20160109-story.html.)

“I am thrilled about this; I can’t begin to tell you,” says Hirokawa. The move to the Leigh Valley will bring diversity to the chorus, she explains. “Also, this gives us an opportunity to be of service to a larger population.”

Students living in the Red Hill area are still welcome, and Hirokawa is working on a plan to help bring those interested in continuing with the Chorus to the Lehigh Valley.

As for local students, Bel Canto is currently accepting new singers into its intermediate level ensembles for children in grades 2-6. If you know of singers who might be interested, they are invited to attend an open rehearsal on January 25 and reservations for a spot in that rehearsal can be made by calling Kim Sehn, choir administer, at 215-541-4242. Auditions for all levels of the chorus will be scheduled in May.

The first appearance of Bel Canto under the Bach Choir umbrella will be the Bach Choir’s 2016 Family Concert to be held February 28 at Zoellner Arts Center.

A Call for Papers

The fifth Bethlehem Conference on Moravian History and Music will be held this fall from October 27-30. This conference explores Moravian history and music from the fifteenth to twenty-first centuries in Europe, the Americas, Asia, Africa, and Australia. We are now accepting proposals for papers, panels or lecture recitals on any topic related to Moravian history and music but special consideration will be given to the following themes:

The program committee will notify accepted applicants by May 1, 2016. A limited number of grants for housing and travel costs are available. We encourage submissions from undergraduate students for whom there will be special panels and poster sessions.

The conference is sponsored by the Moravian Archives, Moravian University, and the Center for Moravian Studies, in partnership with the Moravian Music Foundation, Moravian Historical Society, Moravian Theological Seminary, and Historic Bethlehem Partnership.  For more information and updates: www.moravianconferences.org.

Last week, Professor Emeritus Joel Wingard began his second semester as a Lecturer in the English Department at Penn State University, Abington College, teaching “Introduction to Writing Studies," a sophomore-level course. This is a continuation of an appointment Wingard accepted for the fall 2015 semester when he taught a senior-level digital writing course, "Communication Design for Writers." In fall of 2016, he will be offering another senior-level course, “Writing for the Web.”

“I am thrilled to be back in the classroom, teaching and learning again,” says Wingard. “The Abington students have been great, and the University affords outstanding support for digital teaching and learning.  And because Abington has a membership in the Philadelphia Writing Program Administrators, I can again be active in that professional association.” Wingard attended the group’s fall program at the University of the Sciences, along with the director of the writing program at Abington, Professor Liliana Naydan.

Wingard notes that, like Moravian University, Abington, which enrolls more than 4,000 undergraduates, traces its roots to a women's school: The Chestnut Street Female Seminary, which opened in 1850.

ARTICLES, ESSAYS AND OTHER WRITINGS

Professor Emeritus of English George S. Diamond’s analysis of J: A Novel has been published in the January 31, 2016 issue of Theory In Action, the journal of the Transformative Studies Institute. J: A Novel was a finalist for the Man Booker Prize.  “The book is classified as science fiction because it is a dystopia,” Diamond explains. “It is highly complex, as many of the Man Booker novels are. It is not for every taste, but it is a powerful work of art.”

Professor of Political Science Gary Olson’s Op Ed “As Martin Luther King Jr. noted, philanthropists must  not forget why their charity is necessary” appeared in the January 16 edition of The Morning Call. You can read the full text here.

Jason Radine, associate professor of religion was invited to write an entry on “Amos” about the Book of Amos for The Routledge Encyclopedia of Ancient Mediterranean Religions edited by Eric Orlin, et al, and published by Routledge in 2016. The Encyclopedia is the first comprehensive single-volume reference work offering authoritative coverage of ancient religions in the Mediterranean world.