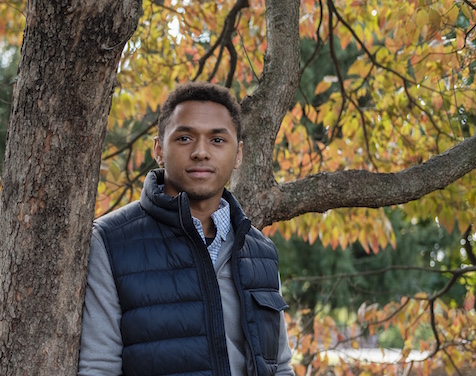 Woodrow “Woody” Battle grew up in Stroudsburg, Pennsylvania, one of six children, all of whom chose small private liberal arts colleges for their education, understanding the value of a high-quality and intimate learning environment.

“I received a lot of scholarship help, which made Moravian affordable, but it was not the only option,” says Battle. “I chose to come here because it seemed the most intriguing of the schools  I was looking at, and I knew I would not just be another face in the crowd.”

Battle has been anything but a face in the crowd. Outside his academic study in environmental economics and policy with an undeclared minor in political science, Battle has been a member of the Moravian University Jazz Band; served as a 26-Point Ambassador, giving campus tours to prospective students; founded the Political Awareness Coalition; and been voted into office in the United Student Government (USG) every year since  he was a freshman. Battle also sits on the Board of Trustees as a student trustee, which has allowed him  to observe first hand the group’s deep commitment to Moravian University and its students.

Battle plans to work for a few years after graduation this spring while he considers his options: law school to study environmental law, graduate school in economics, or perhaps a path he hasn’t yet considered that will open to him.

What he knows for certain is that he is grateful for every opportunity he has had over the past four years and the support that made it possible. “I can’t point to one thing related to my Moravian University experience that can’t be tied back to an alum caring,” Battle says. “A high school kid might have food, a home, and a loving family but need an education. The alumni make it possible.”

And Battle knows, too, with certainty, that he will be one of those alums.