From FIRST YEAR to Fulbright 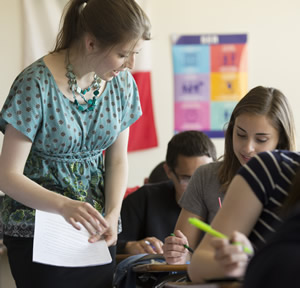 Ask one of the just-graduated members of the class of 2015 what they hope the next year of their life will bring, and you’ll hear much of the same: a full-time job in their field, an apartment or home of their own, maybe even the pursuit of another degree. Robin Tieperman ’15, an education and Spanish major, doesn’t want her post-grad plans to resemble a ‘plan’ at all; in fact, she’d trade it all in for a life-changing experience. It’s what inspired her to apply for an English Teaching Assistantship Fulbright Scholarship in Mexico, and her passion for forming relationships across cultures is what pushed Tieperman and her application over the edge to become the 12th Fulbright scholar from Moravian University in the past 15 years.

Tieperman will spend the next year teaching English in Mexico (Tieperman hasn’t received her full assignment yet), but she believes she’ll be getting an education of her own. “When you get to know the people of another culture, you’re not just knowing a place. You’re knowing the heart and soul of a place,” she says. “Mexico is our southern neighbor, and I think this is a really unique way to learn about each others’ cultures outside of what you hear on the news.”

Tieperman came to Moravian University by way of Central Bucks County in Pennsylvania. She immediately fell in love with Bethlehem’s charm (“My family tells me I should work for the tourism board!”) and the small, comfortable collegiate atmosphere that would eventually pull her out of her shell. She began her scholastic journey as a flute performance and Spanish major, but yearned for the opportunity to travel with her passions. Education gave her more room to take a variety of liberal arts courses, which she believes enhances her skills as a teacher. “I am a very curious person, and I liked that I could explore and indulge that as part of my education.”

“It’s been interesting watching her transformation from a creative, but unsure freshman, to someone who is surprised and delighted by how well received she was by her students during her student teaching,” says Erica Yozell, associate professor of Spanish and chair of the Modern Languages & Literatures department. Yozell was one of several faculty mentors who helped guide Tieperman throughout her time at Moravian University, including with her Fulbright application. “With her degree of engagement, care and empathy, I think students anywhere will respond to her. Her passion for literature and language will encourage her students to consider those areas with more interest and open-mindedness.”

Many of Tieperman’s fondest memories of her four years at the University involve interactions with faculty members — and as we’ve learned, the feeling was mutual. “I particularly enjoyed the independent study on Linguistics she did with me last semester,” says Carmen Ferrero, associate professor of Spanish and Tieperman’s Spanish adviser. “She probably doesn´t know that I learned from her as much as she may say she learned from me. That’s what education is all about, a two-way street, and that street was open with Robin at all times. I am very happy for Robin; I knew this Fulbright was waiting for her.”

Shortly before graduation, Tieperman finished her student teaching assignment at Liberty High School teaching Spanish III and IV to students in grades 9 through 12. This follows a stint at East Hills Middle School teaching Spanish I and exploratory Spanish. As someone who shudders at the word “plan,” it’s not surprising to hear that Tieperman has very little anxiety leading up to her big departure. She anticipates her biggest challenge to be falling into a cultural rhythm and learning social cues, but it’s also what she finds most fun. “I like possibilities, not definites,” she says in an endearing moment of clarity. “There’s a lot of hope and optimism in possibilities.”