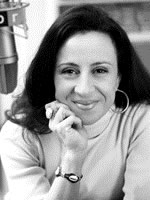 Bethlehem, Pa., September 24, 2014— Winning-journalist Maria Hinojosa will present a talk, “Preparing Our Society for 2043," on Wednesday, October 8, at 7:00 p.m., in Foy Hall. Admission is free of charge and open to the public. Hinojosa’s talk is part of Moravian College’s program celebrating Hispanic Heritage month to honor the contributions that Latinos have made to American society.

Journalist and former PBS host Maria is a trailblazer in news and investigative journalism. With a 25-year history reporting on critical issues and focusing on the changing cultural and political landscape in America and abroad,

Hinojosa has received the highest levels of recognition in journalism including four Emmys, the 2012 John Chancellor Award for Excellence in Journalism, and the Robert F. Kennedy Award for Reporting on the Disadvantaged among other awards.

"America by the Numbers," hosted by Ms. Hinojosa on PBS (http://www.futuromediagroup.org/home/tv/america-by-the-numbers/), is the first national program dedicated to documenting and demystifying the dramatic demographic changes that are occurring in the U.S. and examining the new American mainstream – the growing numbers of Asians, Latinos, African Americans, mixed race, immigrants, women, youth and LGBTs who are increasingly determining the outcomes of elections and influencing arts, culture, and commerce .According to the US Census Bureau, our nation will be a “majority minority” in the year 2043.

Moravian College encourages persons with disabilities to participate in its programs and activities. If you anticipate needing any type of accommodation or have questions about physical access provided, please contact Chris Hunt at huntc@moravian.edu prior to the event.

Moravian College is a private coeducational liberal arts college, offering undergraduate and graduate degrees, that is located in Bethlehem, Pennsylvania. Tracing its founding to 1742, Moravian is recognized as America's sixth-oldest college and the first to educate women. The College emphasizes the deliberate integration of a broad-based liberal arts curriculum with hands-on learning experiences to prepare its 1,600 students, not just for jobs, but for successful careers. Moravian College excels at transforming good students into highly competent graduates who are ready to enter the workplace with confidence or shine in graduate school. Visit the Web site at www.moravian.edu.