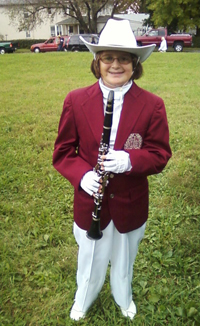 Bethlehem, Pa., December 4, 2014—The power of music can provide a strong sense of healing in one’s life and capture the emotions that cannot be explained through words. As different instruments, melodies, and movements are heard, memories of the past may be recalled as the audience is taken on an unexpected journey, listening intently to the different chords. Michael McAndrew, a senior at Moravian College, was able to experience the powerful effect music can have on an individual as he began composing a concerto for his honors project in memory of Officer Joe Perno’s daughter, Allison.

In the summer of 2013, Officer Perno, a campus safety officer for Moravian College’s south campus, approached McAndrew about writing a concerto in memory of his daughter. “He said he had two other pieces written in her memory and would be honored if I would be the third” says McAndrew. “From there, the programmatic sense of the piece just clicked, and the inspiration soon followed, as the piece, Visions Unbroken, became a musical autobiography of her life and legacy.”

Throughout the concerto, different aspects of Allison’s life are intertwined into the instruments and movements. Allison was a clarinetist at East Hills Middle School and aspired to one day be part of the Freedom High School Marching Band, like her two brothers, Anthony and Joseph. “The trio of the flute, oboe, and clarinet represent these three family members, with Allison being the clarinet” explains McAndrew. “In addition, I used the duet of cellos and violas in the first movement to represent her parents, Joe and Katherine.” In the performance, the flute is played by Gabrielle Marotta ’17, the oboe is played by Nicole Weaver ’17, and the clarinet soloist is Devin Diaz ‘16. 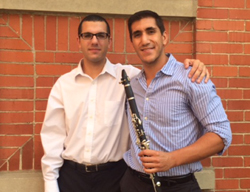 Long time friends and musicians, McAndrew and Diaz came together to create Vision Unbroken. “I was originally going to write a clarinet concerto for Devin anyway and tie it into a future honors project,” says McAndrew. Diaz added, “We have worked on a lot of music with one another over the years we’ve spent at Moravian College. Within this time we have been able to learn about each other musically, which helped to bring Vision Unbroken together.”

The piece itself includes four distinct movements in which different aspects of Allison’s life are incorporated. In the first movement, Dawn Within the Skyline, the tempo is slow, creating a dream-like atmosphere, which represents the beginning of Allison’s life. As the orchestra moves into the second movement, Cityscapes to Countrysides, the tone changes to robust and high energy, symbolizing the time the Perno family lived in New York City and then moved to Bethlehem. Within the second movement, the tone changes again to a more jazz like feel and then slows down as clarinet solo evokes “a warm and heartfelt” feeling, demonstrating the “versatility of the clarinet” and hinting at the final movement of the piece.

Moving into the third movement, Vibrant Spirits, the music speeds up to be a little faster to a “more controlled delicacy” as the clarinet adds to the orchestra through its sweet tone, symbolizing the inspiration Allison gave to others wherever she went. The vibrancy of the third movement finally leads up to the fourth movement, Celestial Chroma. Diaz described the fourth movement as “timeless” as its dreamy and austere tone fills the audience with wonder. “It is uncannily beautiful,” says Diaz. “Its brilliance is a reinstatement of the first movement and it reminds me of an angel going to heaven.” Diaz explained that the piece as a whole is “beautiful and calming” as its lush harmonies evoked a “calm response” from the audience as the concerto came to a close. A standing ovation awaited the orchestra as they finished playing Visions Unbroken. Officer Perno and his wife Catherine Perno greeted Diaz and McAndrew with tears in their eyes and embraced them in appreciation for the beautiful tribute given in memory of their daughter.

Reflecting back on the seven-month process of composing Vision Unbroken, McAndrew is filled with gratitude. “I really would like to thank Officer Joe Perno for giving me such a humbling opportunity. I knew that the end result would be for persons greater than myself, which makes it that much more rewarding. I hope that the concerto will be a fitting tribute to the legacy of Allison Perno and that I will have done such a bright young girl justice with it,” says McAndrew. Officer Perno also expresses his gratefulness towards the piece and the kindness of Moravian College. “In one of the hardest times, the Moravian College family helped my family get through a difficult time. They showed so much love and support and I greatly appreciate it.”