Back to Moravian College
Back
Office for Diversity, Equity and Inclusion

Office for Diversity, Equity and Inclusion

During the spring 2020 semester, Moravian College’s Black Student Union (BSU) sponsored a Black Lives Matter protest on campus. That important, historic and well-attended event attracted the participation of many students as well as staff, faculty and administrators. The speakers at the event called attention to the tragic reality in the United States of the denial of Black humanity and the criminalization of Black and Brown bodies.

Just this month, the United States has witnessed multiple examples of the denial of Black humanity and of criminalization.This week, a Black man who was bird-watching in Central Park in New York asked a white woman to put her dog on a leash (while standing next to a “your dog must be on a leash” sign) so the dog would not damage the brush his cherished birds use as a habitat. The white woman responded by first threatening and then actually calling the police to report she was being threatened by “an African American man.”  She emphasized the bird-watcher’s race, it seems, to justify her fear of him and also to incite a sense of urgency on the part of the police that she was in danger. By so doing, she was both being racist and weaponizing the tragic reality of the prevalence of police brutality.

Also this week, in Minneapolis, George Floyd, an unarmed Black man, died while he was being detained by white police officers for a non-violent charge. Bystanders videoed the incident, during which one of the officers knelt on Floyd’s neck, and Floyd uttered the haunting and tragically familiar phrase, “I can’t breathe.”

And earlier this year, an African American jogger, Ahmaud Arbery, was killed by an armed white civilian in Georgia. The white man and his father assumed Arbery was a burglar.  In addition, in March, police officers killed African American EMT Breonna Taylor while executing a search warrant for a man who did not live in her home.

These are only some of the recent examples of injustice. And they have occurred as the coronavirus is taking some of its gravest tolls in communities of color. Centuries of systemic racism and discrimination have left communities of color more vulnerable to the virus than others. Residential segregation, employment discrimination, and unequal access to quality health-care are just some of the causes of the heartbreaking discrepancies.

Meanwhile, hate-crimes targeting Asians and Asian Americans have been on the rise.  Inaccurate beliefs about Asians and the source of the coronavirus fuel these acts of bigotry.

As you are grappling with these events, Moravian College wants to make sure that you have the support you need. We, along with President Grigsby, encourage you to reach out to friends, family and others in your support networks as you process your feelings and responses.  Please also know that you can reach out to the Bias Response and Intervention Team (BRIT); Office of Diversity, Equity and Inclusion; the Office of Spirituality and Inclusion; and others in your college support networks.

Finally, we want to reiterate that Moravian College is a welcoming community that embraces and values the diversity of all members of the campus community. Moravian College condemns bigotry and hatred and stands firmly in support of diversity, equity and inclusion. The College is committed to accepting the uniqueness of all individuals, and we cultivate an environment that respects, affirms, and defends the dignity of each member of our community.

What is the Bias Response & Intervention Team?

The Bias Response & Intervention Team (BRIT) serves as a safe resource for members of the Moravian community to raise immediate concerns regarding specific incidents of bias or acts of harassment and discrimination that impact them and the Moravian College community.

BRIT is not a disciplinary body, however, reported incidents that may potentially violate College policies may be held accountable through the Conduct process. However, certain reported acts of bias incidents may be constitutionally protected speech and not subject to College action or formal investigation. Participation of individuals in a restorative process, such as facilitated dialogue or Circles, is voluntary. BRIT offers assistance to the Moravian community by providing resources to individuals impacted by and/or involved in a reported incident.

Moravian College values open expression and debate in the context of civility and mutual respect for diverse individuals and communities; bias incidents directly impact our ability to know, trust, support, and learn from one another.

What is a Bias Incident?

A bias incident is a perceived act of bigotry, harassment or intimidation committed by or against a Moravian College community based on actual or perceived race, color, sex, religion, ancestry, genetic information, national origin, sexual orientation, gender identity or expression, familial status, marital status, age, veteran status, mental or physical disability, use of guide or support animals and/or mechanical aids, or any other basis protected by applicable federal, state, or local laws. This includes, but is not limited to, slurs, graffiti, written messages, or images that harass or intimidate individuals or groups because of their membership in the above listed protected classes.

Moravian College is a welcoming community that embraces and values the diversity of all members of the campus community. We accept the uniqueness of all individuals, and we cultivate an environment that respects, affirms, and defends the dignity of each member of our community.

Moravian College does not discriminate against any person based on actual or perceived race, color, sex, religion, ancestry, genetic information, national origin, sexual orientation, gender identity or expression, familial status, marital status, age, veteran status, mental or physical disability, use of guide or support animals and/or mechanical aids, or any other basis protected by applicable federal, state, or local laws.

HOW TO REPORT AN INCIDENT

You can report a Bias incident in any of the following ways. 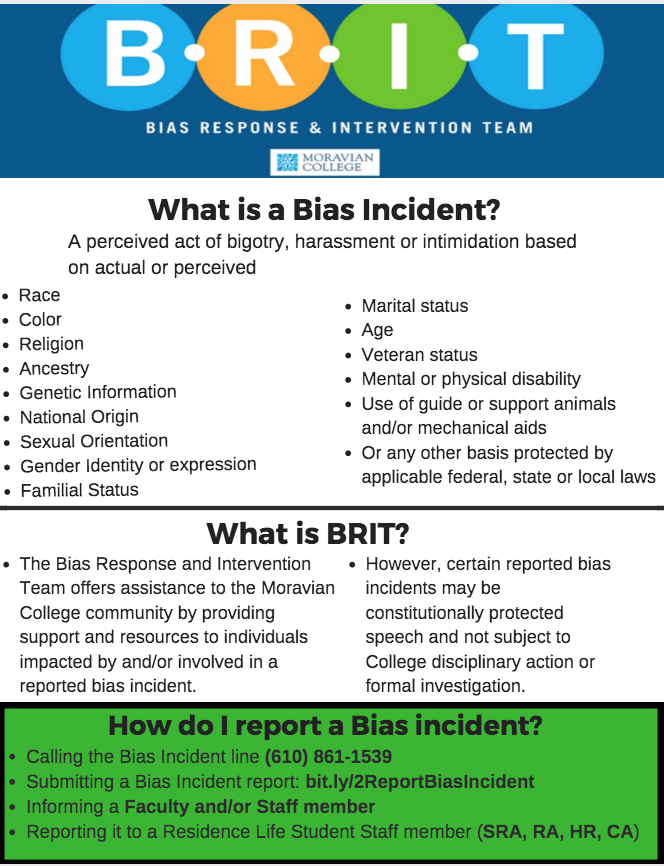