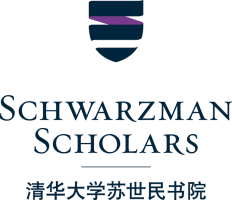 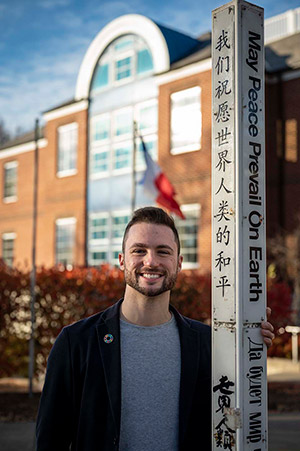 Bethlehem, PA, December 7, 2021: Today, Moravian University announced that alumnus Michael Gallo ’19 has received a Schwarzman Scholars fellowship, one of the world’s most prestigious graduate fellowships. The program is held at the Schwarzman College on the campus of Tsinghua University in Beijing.

Joining the Schwarzman Scholars Class of 2023, Gallo will pursue a one-year Master’s degree in Global Affairs with a core curriculum focused on three pillars: leadership, China, and global affairs. Each year, the academic program is updated to accord with current and future geopolitical priorities. Scholars are taught by leading international and Tsinghua faculty, with frequent guest lectures from prominent global thought leaders. Beyond the classroom, Scholars gain exceptional exposure to China and access to important relationships through internships, mentors, high-profile speakers, and world-renowned faculty members. Scholars are also provided with a range of career development resources to help position them to lead in various industries upon graduation.

The unique combination of coursework, cultural immersion, and personal and professional development opportunities equip students with a well-rounded understanding of China’s changing role in the world, critically important to leadership in any field in the 21st Century.

Application to Schwarzman Scholars is rigorous and is designed to identify leadership potential, intellect, and strength of character. From an initial pool of nearly 3,000 applicants, only 151 individuals from 33 countries and 106 universities were selected.

The Schwarzman Scholars Class of 2023, which will enroll in August 2022, is comprised of an exceptional group of individuals, including the following:

Application to Schwarzman Scholars is rigorous and is designed to identify leadership potential, intellect, and strength of character. From an initial pool of nearly 3,000 applicants, 151 individuals from 33 countries and 106 universities were selected.

“Michael Gallo was an exceptional student during his time here at Moravian, and it’s clear he remains committed to lifelong learning and making his impact on the world,” said Bryon Grigsby, president of Moravian University. “Schwarzman Scholars represent the best of the best, and we couldn’t be more proud of Mike and what he’s accomplished so far.  His future really is limitless.”

“I am over the moon about this,” says Gallo. “Living in China the last two years, the U.S.-China relationship was always on my mind. I have a tremendous interest in China. In my work for the UN, our office was in China, but we weren’t doing anything programmatic for the country. I wanted to expand on my interest in a more structured way, not just on my own time. Then I found Schwarzman Scholars. Immediately I knew this was for me. It’s perfect.”

About Schwarzman Scholars
The vision of Schwarzman Scholars is to build a network of young leaders, and encourage them to explore and understand the economic, political and cultural factors that have contributed to China’s increasing importance as a global power. Through the philanthropy, foresight, and dedication of Blackstone Co-Founder, Chairman and CEO Stephen A. Schwarzman, as well as the generosity of global donors who have been inspired by the potential and importance of this program, Schwarzman Scholars has raised more than $580 million to date. These funds will help endow Schwarzman Scholars in perpetuity.

Each year, up to 200 future leaders from the U.S., China and the rest of the world matriculate as Schwarzman Scholars at Tsinghua University in Beijing to pursue a one-year Master’s Degree. Scholars chosen for this highly selective program have demonstrated exemplary leadership qualities and the potential to understand and bridge cultural and political differences. They live in Beijing for a year of intensive study and cultural immersion – attending lectures, workshops, and discussion groups; being mentored and advised by leaders across sectors; and traveling while developing a better understanding of China.