In the math department lounge on the second floor of PPHAC, a 3- by 3-foot octahedron constructed with white cubes made from old business cards rests in one of the upholstered chairs while Kevin Hartshorn, associate professor of mathematics, does repair. Projects like this one, as they hang around the department, tend to get a little beat up explains Hartshorn, who is taking an active break from his research.

The octahedron, which grew from a single pyramid representing the first three iterations of a fractal structure (“I wanted to get to the fourth iteration but it would have required a roughly 5- by 5-foot space,” says Hartshorn) was built last summer by math students and is similar to many projects Hartshorn has assigned to students over the years as a way to engage them in mathematics. “One of the things I’m really interested in is helping non-math students appreciate math and approach circumstances in a mathematical way,” he says.

“When I first came to Moravian, I was asked to teach Mathematics for Design, and I’ve really taken to it. I try to help those students look at things from a mathematical viewpoint, so we do a lot of thinking about geometric constructions and how geometric constructions are themselves beautiful. We examine mathematical approaches to perspective in drawing, and we uncover the geometry at work in gothic structures,” adds Hartshorn.

“I’m always looking for interesting mathematical projects that we can do,” he continues. His students have created a polyhedral sculpture made from CDs and zip ties, which grounded a discussion around Platonic and Archimedean polyhedrons. Another project, still available to view in the department, is the Menger sponge. Not to be confused with the bath accessory, the Menger sponge represents an iteration of squares in which the center of the square has been cut out. Like the octahedron, Hartshorn’s sponge was constructed with business cards and occupies a roughly 3- by 3-foot space. “I like students to work on something that’s large and obnoxious,” he says. Much like Hartshorn’s vision for teaching mathematics--minus the obnoxious, of course--which is grand, engaging, and inspired.

Hartshorn, who’s been on sabbatical this spring, stopped the repairs on the octahedron to sit down and talk with Inside Moravian about his passion for mathematics and for his students. Here are excerpts from that conversation.

Two Men Walking in Three Geometries
(Or What Is Straight?)

Two people live on a piece of paper (okay, think the Who’s from Dr. Seuss or Swift’s Lilliputians). Set them walking forward in a straight line in the same direction, and they will stay the same distance apart. That’s Euclidian geometry, explains Hartshorn. Now, put them on the planet that we live on and ask them to walk straight north, and they will get closer together and eventually meet at the North Pole. That’s spherical geometry, which has practical applications for navigation. Then there’s a third more challenging geometry—hyperbolic geometry—in which two people move farther apart as they walk straight ahead of them. 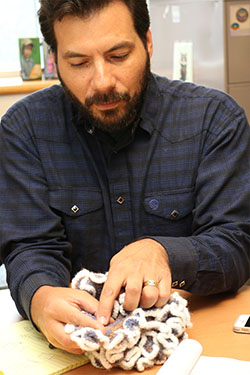 To demonstrate hyperbolic geometry to his higher math students, Hartshorn had them work on—you guessed it—a project. Specifically, they crocheted a piece in which more and more loops are added to each layer, creating a structure with multiple folds, reminiscent of a head of kale.

“There’s reasonably strong evidence to suggest that the universe is hyperbolic,” says Hartshorn. “But that’s a more difficult question. It’s easy to see what’s happening when you’re on the outside looking in—looking at a piece of paper or a sphere, for example--but if you’re on the inside, how do you figure it out?” It’s the difference between the extrinsic and the intrinsic, and with the latter, how do you get your perception to understand that there’s more to the world than what you take in through your senses?

“This is what I like to do with my teaching, whether in a first year writing seminar, math for design, or a class with juniors and seniors—I try to get them to think differently about the world. Projects make it real.

“When students go into a job or if they go to graduate school in math, whether or not they can remember the precise notion of, say, a nine-point triangle is neither here nor there,” adds Hartshorn. “What’s important is that they can think methodically and logically, draw a distinction between a proven statement and a theorem, and look at any given circumstance and think through what might happen, what will definitely happen, and what we just wish would happen.”

Math at the Center of the Liberal Arts

At a recent discussion of the liberal arts here on campus in which he was a panelist, Hartshorn threw down the statement that math lies at the root of everything. When asked to elaborate, Hartshorn replies, “Mathematics is at the center of the liberal arts because historically it is a core element of how humans have understood the world, and it shows up everywhere.”

He points to ancient Chinese military manuals that show the calculations made to assess the size of a city or the length of a river. Among the ancient Babylonians and within the Islamic empire, math helped scientists understand astronomy and create more precise calendars. During the Renaissance, mathematics was used to effectively manage commerce, and eventually mathematics entered into philosophical discussions about the infinite and the existence of God.

Several years ago, Hartshorn offered a course called Ethnomathematics, which perfectly illustrates the central role math plays in the human experience by exploring math in non-European cultures including Babylonia, China, India, and Africa as well as that of the Incans, Mayans, and various tribes in Australia and North America. Hartshorn shares a story of Ron Eglash, a professor in the Department of Science and Technology Studies at Rensselaer Polytechnic Institute, who observed a divination technique that recalled the Cantor set from mathematics. When he asked the diviners to show him the math, they refused. They didn’t view it as separate from the technique itself. Eglash was required to go through a ritual in order to be allowed into the experience of the divination where he discovered that the diviners were indeed going through the same process as mathematicians.

“The goal of the class was to help students see that math is part of human culture not separate,” explains Hartshorn. “Math as a curriculum is something we have put together.”

The core of mathematics, says Hartshorn is pattern finding, and pure math is not bound by reality. “We go looking for underlying patterns, and once we see a pattern, we see something deeper and then deeper and we have to leave real-world notions behind and continue drilling down, and then sometimes something comes popping back up,” says Hartshorn. "As an example, we do rich number theory and then we realize this is how we’re going to encode and privatize data on our cell phones and credit cards. That pattern became useful, but we couldn’t predict that, so as mathematicians, we just look.” 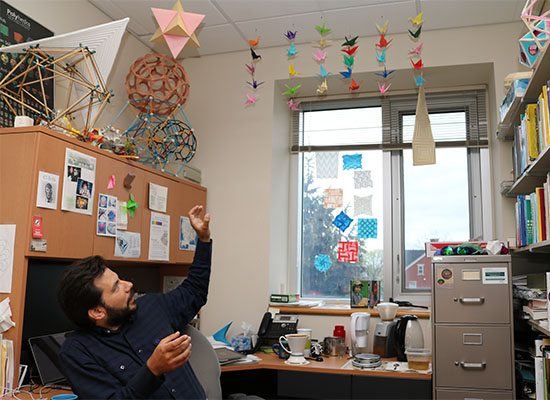 What pieces when connected make a perfect scholarly experience for Hartshorn?

Geometry. “While the algebraic equations that many people associate with math are important, I am drawn to the exploration of new geometries--completely different spaces and ways of understanding the shape/structure of the universe. From working with origami-related projects (including 4-dimensional origami) to playing with tilings on a plane [the focus of his sabbatical’s research] to exploring non-Euclidean geometries, it is trying to understand these abstract worlds that keeps me engaged in mathematics,” says Hartshorn

Teaching. What takes that love of geometry to the next level for Hartshorn is working with students. “The research is great, but by far the most satisfying part of my job is connecting with students and helping them begin to think mathematically and get excited about new ideas,” says Hartshorn. “Whether it’s math for design or working with a student on an honors project, when students have that moment when they see that mathematics is really cool stuff—that’s what I love.”

Hartshorn at the vertex of students + mathematics—that’s a geometry we can all get excited about.

In the summer between 8th and 9th grade, my family took a car trip from Texas to California to visit family. Since this was before the days of DVDs or hand-held entertainment, I needed a book to read, and I chose the calculus text my dad used when he was in college (I still have that book in my office). My family still shares the story of my dad and I talking about calculus over dinner at some restaurant and the waitress looking bewildered at the notes that we were jotting down on the restaurant napkins.—Kevin Hartshorn, associate professor of mathematics